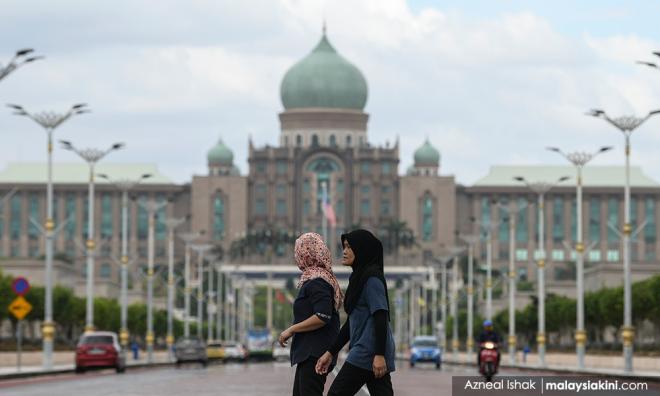 YOURSAY | ‘The RM85.5mil allocation could be better utilised for services that will benefit the rakyat.’

Jasa for propaganda? That era is over - Wan Saiful

Oriole: First of all, Bersatu information chief Wan Saiful Wan Jan, stop this ‘fake news’ nonsense - your statement already shows a defensiveness. This did not work for BN or even Donald Trump, so it is unlikely to work for the motley crew such as yourself.

Secondly, if you are listening to the rakyat, ensure that all small business owners regardless of race are getting the benefit of stimulus packages.

If you have gone back to the BN-era categorisation of race as is apparent in the budget categories, the people will kick you out and you will need to find another backdoor to crawl back into power.

Most importantly, when you say that you are listening to the people, does that mean some people or all of the people? Because, a ‘ketuanan’ agenda which is discriminatory is a racist agenda and that was what got the other lot kicked out in 2018.

Dividing the nation in this way is the path of destruction. But insecure parties such as yours will probably tear this nation apart just like the other lot did by sowing ideas of separation, discord and supremacy.

Generations of Malaysian will get to spit on your memory for what you do.

So, is Jasa taking over the role of Jabatan Penerangan (Information Department)? What I see is that these two have the same aim - there’s nothing different between them except their names.

It shows that the money that will be allocated in Budget 2021 is not properly distributed because if both Jabatan Penerangan and Jasa get the money, wouldn't that money be wasted? These two entities have the same purpose - which is to spread government information.

MS: While Perikatan Nasional (PN) forces citizens to dip into their meagre savings in the Employees Provident Fund (EPF) instead of doing what responsible governments usually do to assuage the economic pain of the people - create economic opportunities and offer social support services - it has no compunctions using RM85.5 million of taxpayer funds to monitor social media with the sole aim of identifying dissent among the people.

What is possibly worse, the funds for the purchase of eavesdropping technology will, as usual, be shared with cronies and crooks as payback for support.

It also shows that the notion of elected people's representatives listening and responding to the voices of the people has been discarded either because those in the pay of the regime are crooks or that nothing they say is credible, or both.

That and the fact that the ministers in this illegitimate government themselves consume millions in funds for "two-way communication" mean one thing only - this Jasa is only the latest way to siphon funds because every other racket has been exposed.

Jetson: This is the problem when the Finance Ministry is especially in the clutches of the politicians. They spent the money according to their whims and fancies. They throw crumbs into the path of the average man but collect millions in the name of government’s expenditure.

They don’t care to listen to the complains or dissatisfaction of the taxpaying public, giving reasons that are too flimsy to make sense.

The only remedy the people have is to get rid of these not only self-serving politicians but backdoor politicians when the time comes.

Now PN is still making the same mistake of not listening to the people. The RM85.5 million kept aside for bringing back Jasa could be better utilised for services that will benefit the people and, in return, PN can secure more votes.

It will be costly for PN for being stubborn and refusing to listen to the people. By denying that Jasa will not be another agency that will be relaying the administration's propaganda to the people would have hardly any people believing in such a statement.

PN, just like the leopard, can never change its spots, or in this case, its agenda.

Kita Orangbiasa: Yes, we the rakyat, the taxpayers and the voters, want the government to listen to us. Firstly, there is already a Jabatan Penerangan so why need another unit? Even an idiot will know this is redundant.

This is a very difficult time for the rakyat, with unemployment soaring high. The RM85.5 million can be best utilised to fund the poor. Is that too much to ask?

What kind of government this? It’s a shame you can’t prioritise to reduce people’s suffering.

Jasa was disbanded by the Pakatan Harapan government. Prime Minister Muhyiddin Yassin and Communications and Multimedia Minister Saifuddin Abdullah were from that government.

How is that when these people were in Harapan that Jasa was not needed and disbanded, but now suddenly when they are with PN, Jasa has become a priority and gets a huge allocation?

There is already RTM, TV3, Bernama and many other pro-government websites to propagate government initiatives. Why is there a need for this Jasa unit? The PN government owes the public an explanation.

Ace: During a difficult time like this, millions should be spent to assist struggling small and medium-sized enterprises (SMEs), which may be employing hundreds of thousands of workers

and also citizens who are laid off, not on useless entities like Jasa!

As another commenter has said it so well, "Jasa has nothing to do with welfare, business or jobs."

Winter As Come: There is Umno propaganda and then there is PN propaganda. The difference between the two is one is Umno and the other PN, both serving the same evil.

GreenViper4010: Wouldn't it be a more intelligent "message" from the government to allocate these funds to additional healthcare spending instead of wasting it on some sort of fourth-rate propaganda generator?

My parrot could do better, at a much lower cost.

YOURSAY | If Jasa is not for propaganda, then what is it for?