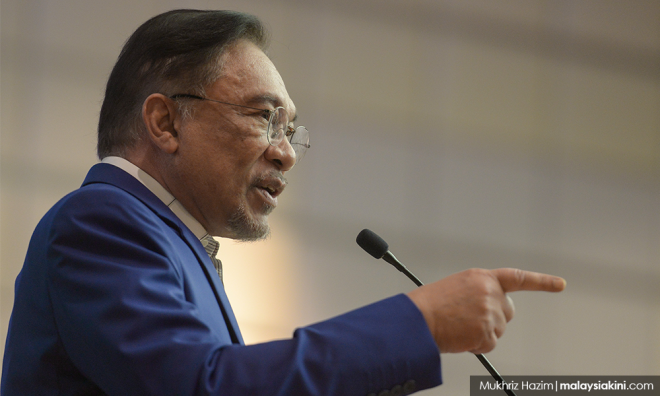 YOURSAY | Anwar’s choosing own path: Too little too late?

YOURSAY | 'It took Anwar an unreasonably long time to make a clean break from Mahathir.’

Anwar explains why he is taking a path without Mahathir

JW: I don't blame PKR president Anwar Ibrahim for his pact with Dr Mahathir Mohamad in GE14 because most of the rakyat also hoped the old man might have become wise because of his long experience. Instead, we got a man who never changed: the most toxic man in modern Malaysia.

What's the worst about Mahathir when given a second chance of being prime minister? He openly lied to the rakyat when he said he did not truly promise the rakyat about serving as PM in the first two years and letting Anwar to serve as PM in the remaining years before the next election.

My problem with you, Anwar, is that you took an unreasonably long time to recognise that and make a clean break from him. Did you not know that a good majority of the rakyat were ready for you to strike your own path and take a chance even before the Sheraton Move?

The long and short of what you are finally saying here, Anwar, is that it is too little too late. And in case you are still clouded in your thinking, do you not know you have lost all credibility when your announcement about how you had a solid majority to take over Putrajaya from Muhyiddin Yassin's Perikatan Nasional ended up as hot air? Even before that, many rakyat already dismissed it as they believed "nothing will come of it".

So, nobody will care now whether you, Anwar, go your own way. I consider myself your supporter simply because it was totally unforgivable what the old man did to you in the late 1990s.

But now, I am beginning to accept none of that will change - you will still be making grand speeches that are merely hollow and the old man will remain as toxic and as despicable as ever.

Doc: Anwar is wise not to include the seasoned "political troublemaker" Mahathir in his future plans for Harapan. After so many decades in politics, clearly, Mahathir's core political strategy is "divide and conquer".

Mahathir is in fact a political cancer. Whatever group, coalition, or party he enters; he slowly infects the party's foundations and destabilises it, and then rides in as a saviour of that entity and take over the party.

I guess all political parties and political leaders are aware of his cancerous tendencies and not only Anwar and Harapan are avoiding him like a plague but even PAS, Umno, and Bersatu do not want to entertain nor have anything to do with him.

Kim Quek: I agree. It is a measure of Anwar’s great qualities that despite being publicly and wrongly humiliated endless times by Mahathir, he has not retaliated in kind even once. He even forgave and accepted Mahathir as a comrade – all for the sake of the country.

Without Deng Xiaoping, there would not have been the present superpower China, and without Lee Kuan Yew, there wouldn’t be the present-day Singapore, which is the success story of nation-building in modern times.

Great leaders don’t come by the dozens. They may come once or even less in a lifetime.

Malaysia has not had a leader of such stature yet since our independence, hence the unrelentingly deteriorating state of the nation.

Must we let this chance of a lifetime slip through our fingers by continuing to ignore or even publicly humiliating Anwar?

IndigoSwan6963: Mahathir is afraid of Anwar. His conscience is weighing on him now. He blew away all the trust and respect that the rakyat had for him. He is the cause of the mess we are now in.

Who is he now to say that Anwar is not fit to be the PM? He should have retired from politics and enjoy the remaining time with his grandchildren. But now, he is still fighting for relevance.

Let all Malaysians remind him that he is already history. We hope that the media speak less of him or he will think he is still needed for the New Malaysia that we all hope for. With him, there is no hope except destruction.

Ask any reasonable Malaysian, you will find that most will want him to keep his big mouth shut. What is Pejuang fighting for? Is he fighting for himself or for all Malaysians?

IndigoTrout2522: Looking at the past record of Mahathir from his time as a Malay radical to his 24 years (twice) as PM, he has proven that he has not changed, using race and religion to his end.

He used anyone to keep his power and position. None of his deputies, including Anwar, could work with him. It is always his way or the highway. He has never intentionally transitioned power to Anwar.

So, no one should be surprised as Mahathir would blame anyone else for his own failure. He is such an autocrat that he held back the nation’s economic, social, and racial development for decades.

We are still racially divided. Ideally, the nation should now be helmed by a new generation of capable leaders, but Mahathir is responsible for this failure to groom.

Anwar and Harapan should just move on without Mahathir as he now has lost the respect, trust, and confidence of the rakyat.

Today’s political situation is caused by Mahathir. His close lieutenants are moving away from him too. Mahathir’s vision of a unity government means all MPs will have to listen to him and be loyal only to him - no more political parties.

MS: Indeed, from the mid-90s till where we are today, the tail end of 2020, we have been forced to endlessly and tediously read, gossip, speculate, argue, and write about this Mahathir-Anwar claptrap which has verily and stubbornly stuck on the nation's consciousness like a blood-sucking leech and simply refuses to leave or be evicted.

It has consumed 25 out of the country's 63 years with really nothing to show. Except for maybe one thing.

That Malay politics, submerged and soaked in a toxic cocktail of race, religion, and medieval practices will never allow for the flowering of new talent, will never rid itself of its accumulated dross and vermin, and will never ever learn the basics of good governance - because it is incapable of doing so.

This is why it will, like the invisible virus which weakens and kills, continue to eat away at the country's vitals - a country already inflicted by three comorbidities - gross incompetence, normalised corruption, and religious buffoonery.

I suppose "news" like this one will continue to be published until the demise of one or both of these characters who, if facts matter, have (together) done everything to cripple the country, destroy its potential, and set it on the road to an inglorious end.