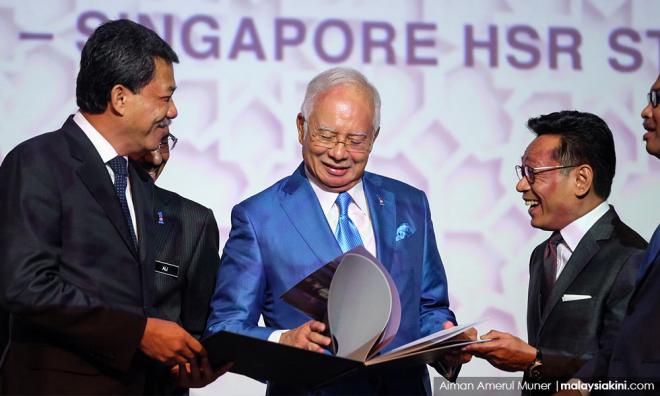 YOURSAY | With leaders like ours, S'pore can eat us for lunch

YOURSAY | 'I can't blame S'poreans for thinking that the M'sian govt is easy meat.'

BusinessFirst: This government has failed us yet again. Wasting people’s hard-earned money. In Singapore, before they proceed, they check and counter check and look at all angles before committing to an agreement.

Here, as usual, slipshod action. When you have a contract agreed, you do not change the terms. This is what Malaysia tried to do - to add other non-agreed stops. If you decide you want to add stops, you are at the mercy of the other party. If ending at Kuala Lumpur International Airport (KLIA) was important, it should have been addressed earlier.

Also, the point is illogical. The whole purpose is to facilitate travel between both parties to each other's country via high-speed rail (HSR) to improve connectivity for travellers between Singapore and Malaysia in terms of business and tourism. Meaning, you can travel from Singapore to the heart of Kuala Lumpur and walk out to your meetings and appointments.

To go on route to the airport is to cannibalise Singapore airport's network and also makes no sense from an HSR point of view as the purpose is not to take the HSR from Singapore and fly from Kuala Lumpur.

Honestly, this is not the way a nation that wants to be respected in the world should act. When you have an agreement, stick to it. Your word must count for something. Who dares to accept the commitment of Malaysia when they can backtrack, whether on water, HSR or Malaysia My Second Home?

Just because you can play out, betray and backstab within Malaysia, like it is an ordinary course of business, does not mean internationally they will accept it or be forced to accept it. Hence, you end up paying RM300 million or what have you.

I hate to say it, but our leaders, with a few exceptions, just do not make the cut. They have failed the nation and its people, whether in terms of promoting unity, education or economic development. Yes, there are places worse than us but then there are many better than us. With all the blessed resources in Malaysia, why must we settle to be the third world?

I think that the leaders thrown up by the bumiputera policy, where now we have a certain race and religion dominating almost every aspect of government, is not working as we are not getting the best and brightest, and the country is suffering for it.

So perhaps it is time to step aside and let others lead Malaysia. You have had your time. These 60 years and we have greater division, corruption, Covid-19 running amok, economy struggling, poor CSR (corporate social responsibility) leading to bans on oil palm, and throw in the many potholes on our roads.

Who is to blame? DAP again? The Chinese? The Indians? Christians? Communists? Hindus? Kadazans? Ibans? Jews? Israel? Soros? Who caused all the scandals from Tabung Haji, Felda, Mara, and even now halal meat?

Vijay47: The official line that the Malaysian government appears to be now feeding us is that the unexpected state of our economy does not permit us to embark on such an extravagant adventure, a concern not commonly encountered here.

The other specific area of disagreement is Malaysia’s proposal that the HSR be extended to include KLIA, a somewhat straightforward yes-no request.

The first reason is understandable, the second a triviality that surely does not warrant withdrawal from a project supposedly of immense benefit to both countries. In any case, the KLIA extension could be deemed an internal feature solely under the responsibility of the Malaysian side.

It is hoped that both parties would reveal the full reasons for the HSR being called off - this is a commercial agreement and not a security matter. We don’t need another NDA (non-disclosure agreement).

Without going into related technical aspects, whether double-tracking would have served us better, there is one element in both the Singapore and joint statements that seems to be strange and irrelevant.

Both Lee Hsien Loong and Muhyiddin Yassin hoped that bilateral relations would continue to be good. Why should the cancellation of a mere transportation arrangement infringe into the cordial relations Malaysia and Singapore are said to enjoy?

Knowing Malaysia, it is likely that Putrajaya is trying to introduce a “Tajuddin aspect” into the deal. And knowing Singapore, they refuse to bite.

Dr Raman: This was BN's gift to the rakyat. At least RM300 million of rakyat's money gone up in smoke. We even donate to Singapore, a country several times richer than us. Who is the smart-aleck who signed this contract?

Now Perikatan Nasional (PN) will play the same game and spend more on HSR Malaysia, sign agreements with generous termination clauses and one day terminate it. Of course, the Employees Provident Fund (EPF) and Petronas will be forced to take major stakes. This is kleptocracy economic theory.

Headhunter: Can we help it when most Malaysians think mega-projects are implemented not for the rakyat but for crooked politicians and their cronies to steal our money under the guise of development projects?

We have seen this too many times already and they are draining the country's resources when we can hardly afford it. How much did we lose on that crooked bridge to Singapore that was abandoned after hundreds of millions of ringgit were disbursed?

And why are we always getting the wrong end of the stick when dealing with Singapore? I can't blame the Singaporeans for thinking that the Malaysian government is easy meat for the taking. One thing is certain, there are corrupt Malaysians who are laughing all the way to the bank.

Adi in SQ: According to Singapore newspaper Straits Times, it is estimated that the costs incurred to date - thus compensation – is about S$250 million (to May 2018), plus remaining months in 2018 (S$6 million in June, more than S$6 million in July, and at least S$40 million from August to the end of 2018 - the project was suspended in January 2019).

Dr Spin: This seems an unbelievably bad outcome for Malaysia and a good one for Singapore. It has to be asked if Malaysia employed a competent team to review options and negotiate a settlement to suit both parties and the future.

Surely, this was not handled by the current crop of politicians, or that would explain it.

Salvage Malaysia: In the first place, Malaysia should never have signed the agreement where the cost-sharing is disproportionate.

With this, even Bandar Malaysia project has lost its main allure factor. Now it’s just a standalone Sungai Besi development. I won’t be surprised if the developer pulls out and wants the government to pay them back.

YellowKancil0051: Unfortunately, I think Malaysians won’t realise how detrimental these kleptocrats are to us until we have a crisis, as they did in Greece where people have to queue to get money out of the bank or when major austerity measures have to be put in place and the public sector collapses.

Then, maybe, the general populace will realise that these race-and-religion political games our politicians are playing is about pulling wool over their eyes to rob them blind.

Prudent: Abraham Lincoln was wrong, very, very wrong. In a Western-style 'democracy', much less a Malaysian-style kleptocracy, the thieves need not fool all the people all the time.

The kleptocrats simply need to fool a simple majority of the people all the time by using the opiates of race and religion.