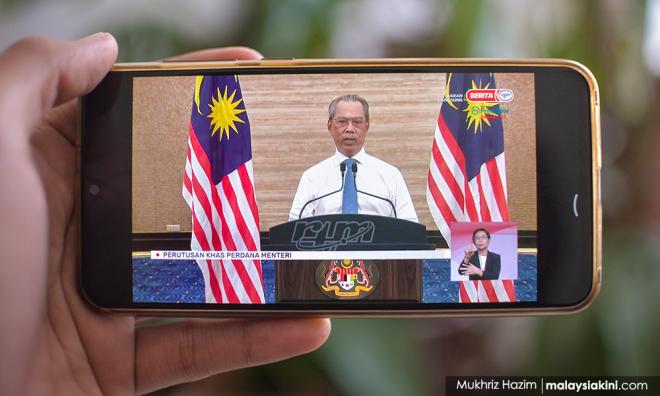 YOURSAY | What can emergency do that MCO cannot?

YOURSAY | ‘Muhyiddin got the emergency he wanted, not what the nation or rakyat deserve.’

But there is nothing the current laws cannot do to combat the pandemic that the emergency can.

Unless Muhyiddin Yassin can specify these “certain powers” under the emergency that it will otherwise be denied, we will take it that his sudden impulse to declare the emergency was to pre-empt the spate of withdrawal of support to him from MPs coming his way.

In other words, he is only trying to save his own skin at the expense of the people as the state of emergency will certainly have a negative impact on the economy, causing even greater misery to the rakyat.

Quigonbond: The dichotomy between a military coup and a civilian coup is a false distinction. Even during our earlier emergency, it was never a military coup, but enough to suspend the Parliament and elections.

Under the National Security Council Act, some aspects of rule of law such as inquests are suspended. So it is already a bare-faced lie that the judiciary is not affected.

One can only imagine what Muhyiddin, or in his de facto incapacity, people like Senior Minister Azmin Ali will do to retain power by all means necessary.

Without a clear majority in the first place, they are even more desperate to break normal laws, customary norms and best governance practices to keep power.

Muhyiddin, are you suggesting that the nation was compelled into this unwelcome emergency at the Agong’s behest, that His Majesty woke up this morning and decided it would be a good day to declare an emergency? And you had nothing to do with it, but being the obedient servant you are, merely carried out the royal decree?

But stranger tales await the disbelieving multitudes. You now claim that “the government needed certain powers to effectively combat the worsening Covid-19 pandemic”.

Perhaps you could share with us, yes, the disbelieving multitudes, what these certain Covid-combatting powers are. And maybe you could also regale us with fables of what circumstances prevail in an emergency-less Malaysia that prevent us from triumphantly taking on that cursed virus.

If my frail memory serves me well, I recall that thus far and including MCO 1.0, we seem to have managed with moderate success.

You further mention in more than passing that certain dark forces were pressuring you to hold elections. So, the universally prescribed response is to declare an emergency? Surely, our version of parliamentary democracy rises to new heights.

A final question again, kind sir. You assure that the judiciary would be allowed to continue unfettered. Why did you suddenly pull the judiciary out of your hat of many colours? Perhaps to endear yourself to the disbelieving multitudes, to impress upon them that emergencies notwithstanding, you are actually a swell guy?

BusinessFirst: Sorry, but the reasons given for the declaration of emergency do not appear convincing. It seems contrived and the hush-hush suddenness as if to surprise the public to prevent any possible outcry does not add confidence. Why rush to see the king on the sly?

Since Dr Mahathir Mohamad's resignation, it seems that everything is being done to maintain the Muhyiddin premiership.

This out-of-the-blue declaration, with respect, does not add up. The need to hold back elections in Sarawak can be solved at the appropriate time in June 2021 by declaring an emergency in that state, if necessary.

An interim caretaker government can be appointed if Perikatan Nasional (PN) has fallen. These arguments were valid a few weeks ago, what has changed?

What is worse, we are being given certain assurances that they will not abuse the power given, but coming from a government filled with people who have no qualms about lying, betraying others, doing U-turns filled with double standards, why would any reasonable person accept these assurances at face value.

I hope these leaders are prepared for the consequences and damage that will be done to the economy and confidence in the country.

Apanakdikato: "Stern action will be taken in the interest of the rakyat's welfare and national security," said Muhyiddin.

The PM should actually address this stern warning to himself and his backdoor government. MCO 2.0 could have been avoided if not for his gross mismanagement of the country's Covid-19 situation and selfish political agenda.

The country will lose about 0.7-0.9 percent of GDP for every two weeks of MCO. This is equivalent to about RM10 billion per fortnight of MCO. The sad thing is that the vast amount of lost government revenue due to MCO 2.0 could have been channelled to the purchase of vaccines and economic aid for businesses.

In the meantime, Singapore has progressed well into Phase 3 of their Covid-19 recovery plans, and public vaccination is starting as soon as this week. The Singapore government make it convenient for their people by making the vaccine available not only in public hospitals, but also through private hospitals, polyclinics and general practitioners.

The Malaysian government and Health Ministry should learn from how Singapore is managing Covid-19.

Mohd Bakri 3: Congratulations PM. You got the emergency you wanted, not what the nation or rakyat deserve.

You have outplayed Umno with their taunts or threats of not supporting you by end of this month.

YellowRusa5552: The MCO is already some form of restraint on freedom of people, why the need to add another layer of oppressive mechanism on the people?

If the real intent is to arrest the Covid-19 pandemic, the former is sufficient unless the PM is feeling so insecure that he needs to kill two birds with one stone.

We all know what the other bird is, but doing this for sake of clinging on to power is really disgraceful and show a man who is dangerous and unhinged, who show no respect for the people and the Federal Constitution.

If this emergency is civilian in nature, then where is the voice of the people if Parliament is suspended?

Fair Minded Senior Citizen: An emergency is a severe condition imposed on the public when all other efforts to alleviate a situation repeatedly fail. I don’t see the evidence of this in any form or shape.

Muhyiddin, as a backdoor PM, you have hoodwinked everyone to stay in your position when your numbers in Parliament do not give you the authority if put to the test, and now you are fooling with the very concept of democracy that this country has been built on.

Are you trying to mimic US President Donald Trump?