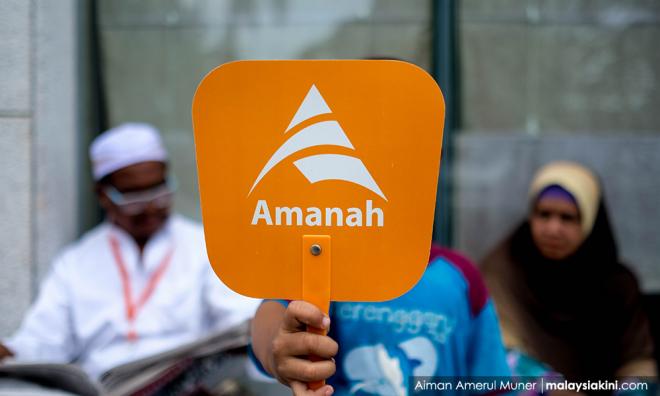 YOURSAY | Amanah, think carefully before allowing Pejuang on board

Not Bitten Twice: Pakatan Harapan is currently relatively united, compared to Perikatan Nasional (PN). Why allow Pejuang to rock the boat? How to reconcile these complicated relationships?

1. Amanah is part of Harapan. Pejuang is using Amanah to leech onto Harapan, unashamedly. This is after its founder Dr Mahathir Mohamad asked opposition leader Anwar Ibrahim to "pergi lah" (get lost) regarding the PM post.

2. If Amanah is part of Harapan, then shouldn't this be discussed at the Harapan presidential council – the opposition coalition’s highest decision-making body?

3. What about seat allocation? Is Amanah willing to share its quota of parliamentary and state seats with Pejuang? I don't think PKR or DAP will share theirs.

4. Has any serious survey been done on the winnability of Pejuang? Carry out a credible survey and one which is not sponsored by Mahathir or Pejuang or done by some half-baked survey centre.

5. It is a myth that the money and the sponsors that Pejuang has can help Amanah. In GE14, Amanah was the poorest but it did well for a newbie party of around three years old then.

6. Has Amanah considered that it may lose many votes due to the Mahathir factor? Whatever votes you think Mahathir can help bring in will be neutralised many times over by losing the votes of the many who just hate his brand of politics.

7. If Harapan wins GE15, how sure are you that Mahathir will not again create his usual trouble?

FairMalaysian: When the trust deficit and credibility of exclusive Malay parties are seriously doubted, Amanah will be "destroyed" if it accepts Malay-exclusive Pejuang.

With its few seats, which may vanish the next time around, Pejuang will hamper the progress of reforms towards good governance and a multiracial government. It has the tendency to "blackmail" the Harapan coalition as Bersatu was doing all along.

Pejuang will never be able to fight for the rights of all Malaysians like Muda. It will be a Malay chauvinistic party that will only be screaming about Malay rights.

Iphonezours: Amanah, be careful and think wisely. Will Amanah benefit anything with Pejuang using your logo?

The situation now is different from 2018, when at that time people trusted Mahathir and his ‘genuine’ intentions.

However, after his treacherous resignation and behind-the-scene schemes, people know the truth and may not forgive him for what he has done.

Mahathir has lost a lot of support from Malaysians and by associating with Amanah’s logo, he just wants to ride on your goodwill.

DalvinK: What? You (Pejuang) have the cheek to come back and tumpang (hitch a ride on) another party’s logo again?

You (especially Mahathir) tumpang the PKR logo for GE14, won the election, then ignored the election manifesto, disregarded the handover, and resigned from the PM position even though you didn't need to. Now you want to start over?

Please, Harapan can do well without Pejuang, but they'll definitely do worse if Pejuang joins the coalition.

Odysseus: The biggest issue in allowing Pejuang to hitch on Amanah is about seat allocation.

Pejuang is dead set against Anwar being the PM candidate for Harapan. Bringing on board Pejuang would mean giving up seats for them to contest and also, allowing Mahathir to come on board to demand his right to be PM again.

Amanah doesn't need to invite trouble into Harapan. Harapan can live without Pejuang.

It's better for Harapan to accommodate the likes of Muda’s Syed Saddiq Syed Abdul Rahman and former Pejuang member Maszlee Malik, who are forward-looking and team players.

Remember that Amanah is known to the rakyat and already built its reputation as a good party with capable leaders.

Anon25: Pejuang will lose big time if it stands as an independent party in GE15. If Amanah agrees to let Pejuang campaign under its banner, make it clear at the outset.

Seat allocation must be left to Amanah’s central committee. Mahathir should not stand. Defeat will be humiliating.

MW: No, let Pejuang take over an existing registered inactive party then negotiate seats and positions between them and Harapan.

Letting them use your logo is a backdoor entry into Harapan, bypassing its presidential council and allowing them to stir up problems later if you happen to win the election.

GreenSalmon5378: Yes, this is a stupid idea. Do you think this is just some simple business transaction/deal here?

All logos carry some ideology/very specific objectives when that logo was created. Unless you fully agree with what it symbolises, then you should not use it.

If you agree with it, then just join the party.

Caripasal: When Mahathir needed help, he approached Harapan. When Harapan needed his help to support their PM candidate, he refused. What kind of partnership is this?

Harapan, haven’t you had enough of betrayal?