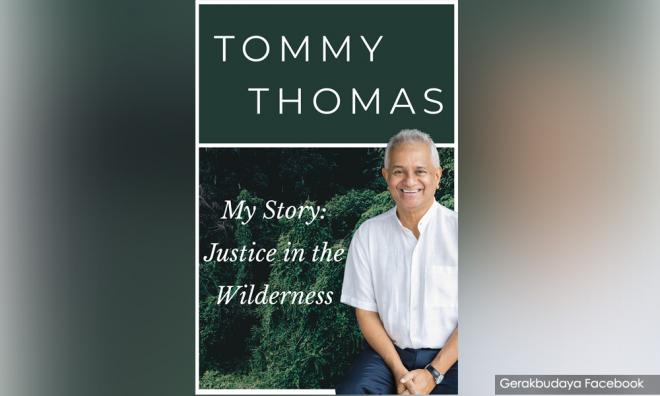 YOURSAY | 'Malaysia is famous for filing police reports for everything - yes, everything…'

David Dass: It is not necessary for one to agree with all of former attorney-general Tommy Thomas's views or insights. But his book has provoked a national discussion on many of the issues bedevilling this nation. That is a discussion we must have.

Some take the view that he disclosed some confidential information. I have not read the whole book thus far (it is not an easy read!) but I must say that the substance of many of the incidents discussed has been in the public domain for a long time. Nothing that Tommy Thomas says is completely new to many of us.

From a scrutiny of the many landmark cases that he has been involved in, he is clearly an exceptional lawyer. And there is no question he served the nation well in the relatively short time he was attorney-general.

Those who disagree with any of his views should write and publish those aspects they disagree with. That is their right. Running to the nearest police station and lodging police reports is not the thing to do.

We need this conversation. Why should the appointment of a Christian Indian attorney-general have sparked such violent opposition? That reaction bothered many of us who regard ourselves as loyal and patriotic Malaysians.

Like Thomas, I love this nation and enjoy its diversity. We can choose to bring out the best in ourselves or the worst. A balanced view of what he says is necessary. Measure the book in its totality.

We are a fairly vigorous democracy with a Constitution that guarantees, among other things, equality of all its citizens, freedom of religion and freedom of expression. Let everyone freely express his or her views.

OMG!: @David Dass, I concur with most of what you say.

However, you also say: “We are a fairly vigorous democracy with a Constitution that guarantees, among other things, equality of all its citizens, freedom of religion and freedom of expression.”

This is wrong. We are a flawed democracy, perhaps fatally flawed. We are permitted just enough rope to hang ourselves. We think we have a vigorous democracy, etc, because that is what they want us to think.

For example, by including religion in the definition of the majority race, that means they immediately have no freedom of religion, doesn't it?

The ideas of equality of citizens, freedom of religion and expression, are nice, idealistic things to have, and noted down in important documents.

But the reality is that none of these desirable things actually exist in an untrammelled sense. All of them have legal caveats, such as "except for" or "subject to", etc, which end up reducing them to meaningless lip-service that serve the power-mad, kleptocratic elites.

Yet here you are, a senior lawyer, waxing forth about non-existent things. We are all handcuffed, many with golden handcuffs, but all of us living in our invisible cages.

Does a bird in a gilded cage sing sweetly about the joys of lifelong imprisonment or of the imagined freedom to fly freely in the open skies?

David Dass: @OMG! I look at our Constitution and I see in it our democratic scheme and structure. I see our guaranteed freedoms. I also know that our judges are independent - or at least as independent as they choose to be. Recent decisions of our Federal Court give me cause to be optimistic.

I am not oblivious to limitations in our system and draconian laws. But generally, over the years we have been 'freer' than many of our neighbours. Many of our commenters write critical articles about government action and inaction without being harassed or intimidated. We did actually change our government in 2018.

Our limitations are more of the men and women who administer our system than in our constitutional scheme. Not all of them. There are outstanding men and women everywhere. Let us work to empower them.

Constitutional Supremacy: It is very likely that those that have lodged police reports against Thomas may not even have read the book nor know the significance of what is written.

Whatever Thomas touched on is in the public domain and has been widely reported, including the damning evidence shown in the High Court judgment in the conviction of former prime minister Najib Abdul Razak.

Thomas has only added his opinions to expose the racial and religious twist given to all his decisions. Giving opinions is not a criminal offence.

The slew of police reports being lodged against Thomas proves his point that these people are seeing things through the lens of race and religion. Malaysians know about it, but remain silent. Thomas, the honest person he is, picked up the courage to expose it.

The ketuanan types cannot accept this truth being exposed to the public. Hence, the hurry to lodge hundreds of police reports.

IndigoTrout2522: Malaysia is famous for filing police reports for everything - yes, everything - and the police would spend time on them. Such practice is almost unheard of in most countries, unless they are really serious and a danger to the nation.

Indeed, those who file reports against Thomas are those who can’t stand hearing the truth.

Dr Raman Letchumanan: It seems the greatest threat to the country now is Thomas' memoir. Covid-19 is just child's play. I never realised a pen can be so mightier, threatening and unnerving than the sword.

Open Mind: A person who serves his country with integrity over a short two years period, initiated a number of top profile criminal, corruption and abuse of power court cases never seen in the history of this country is now facing countless police reports and lawsuits over his opinion of what happened during his service as AG. May God bless this person.

Fair Comments: What is wrong with certain people? If your boss says that you are not up to the mark in performing a certain task, prove to your boss by going the extra mile that he is wrong.

You don't have to go and make a police report against your boss for saying so. By doing so, you look utterly silly and undeserving of any respect.

Existential Turd: Certain people in Malaysia are behaving like the white supremacists in the US. They file frivolous complaints against the minorities, particularly targeting the blacks.

This is their tactic of intimidating those whom they dislike - by instilling fear in the minorities so that they will meekly accept whatever the majority dictates.

READ ALSO: YOURSAY | 'Concerned, frightened, shocked' by the negativity that permeates us