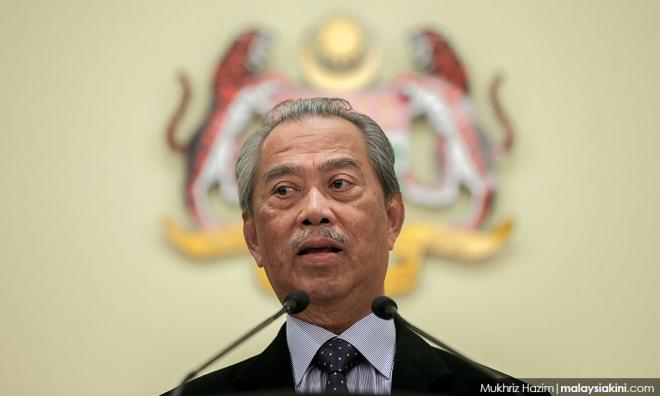 YOURSAY | NOC or not, Muhyiddin’s fate is sealed

YOURSAY | ‘I hope the rulers will do what is best for their subjects and our beloved country.’

ScarletPanda9731: National Operations Council (NOC) or not, Parliament must be convened and discussions and debates should take place. All bills must pass through the Parliament door before funds could be spent.

Sadly and regrettably, Parliament has been sidelined. Do not be hypocritical by talking about democracy on the one hand and do just the opposite by imposing an emergency on the other.

Now that the Perikatan Nasional (PN) may collapse any time, you talk about democracy.

Put the PN government to the test - if you are right that you have the support of the majority, then you can go ahead and do your duty; but if you do not have the majority support, be a gentleman and bow out gracefully. Do not try a red herring or use Covid-19 as an excuse to hold on to power.

How can other countries battle the pandemic successfully without an emergency and Malaysia cannot? In fact, in spite of emergency powers to curb the spread of Covid-19, the reverse has been happening; the situation is getting worse.

I think perhaps the king has resolved that the emergency has not helped. Hence, the call for all political leaders to the palace for discussions. If things had improved, there would not be any alarm bells.

Soon, on June 16, there will be the Rulers' Conference. The writing is on the wall, and an urgent meeting of minds is required. Next week, we may have a clearer picture.

IndigoTrout2522: It is critical to maintain democracy. The NOC is not good for the country as no one can foresee the unintended consequences. Resume Parliament and have a vote of no confidence in the government.

If the PM survives, all parties, politicians, and the rakyat should support him until the 15th general election (GE15).

If he is defeated, a new government should be formed and similarly, the nation should support it until the next general election. That is true democracy and the monarchy should remain above politics.

The PM should be someone with a majority support of MPs, no matter how slim. It is possible there could be some realignment of parties or politicians.

Dr Raman Letchumanan: Prime Minister Muhyiddin Yassin, through his principal private secretary Marzuki Mohamad, should not pre-empt or try to influence the rulers through this lengthy public statement.

This is disrespectful or uncouth to the rulers, to say the least. Other leaders have been contrite in their response after the meeting with the Agong. PAS president Abdul Hadi Awang was even worse, blasting away angrily and quoting the holy book.

After all, the rulers have given all the powers to this backdoor government to govern for the past 15 months. Is it so wrong for the rulers to review the situation which has gotten worse?

Unwittingly, the respect and good name of the monarchs have been affected by the misdeeds done under their authority. This shows the true character of the ruling government.

I hope the rulers will do what is best for their subjects and our beloved country.

Wee_R_Malaysian: Muhyiddin's fate is sealed one way or the other – he is unable to rein in the ongoing pandemic, there is a slower than expected vaccination rate and a deteriorating economy.

PN has exposed its weakness and inability to lead this country time and again. And this resulted in Malaysians turning to the king to save them from further calamity.

The problem that the PN backdoor regime fails to comprehend is that its power-retaining tactic indirectly caused the public to seek help from the king.

Doc: Surprisingly, the Agong meeting all these political party heads for reasons no one is sure of does not seem to be turning the heads or sparking off any enthusiasm from the common folk.

I guess the rakyat is pretty much fed up with the PN government’s lack of leadership or mental acumen in handling this Covid-19 infection rates, vaccination drive, or imploding economy.

But we the rakyat don't think a change of government at this point is going to bring about a beneficial effect. I guess Malaysians of all races and religions have learned one important lesson after more than a year into this pandemic - "Kita jaga kita" (We take care of ourselves).

Cogito Ergo Sum: The politicians have had their go at running the country. It’s time that a team of technocrats took over the running of the nation.

Specialists in finance, health, law, economics, and other essential areas must be appointed to run the country until the pandemic and acute economic dysfunction we are in are alleviated.

The people are tired of politicking and politicians who have only self-interest at their core. No one person or party has all the expertise and integrity to get us on track. We need real-world professionals to put us back on the path of recovery.

Merely One: @Cogito Ergo Sum, how does this work? These 'specialists' are put in place - presumably via some consensus between the rulers and the major political parties?

The experts successfully sort out the pandemic and the economy. Then what? The specialists go back to their day jobs and we elect a new bunch of incompetents?

Anonymous_47029368: We must be naive to think that politicians, who are still busy playing politics and wanting to seize power to benefit themselves when our country is still in a dire situation, can sit and work together in a NOC.

Hang Babeuf: Those who created this mess now have an obligation to try to clean it up. So it is now back to the Yang di-Pertuan Agong and the Council of Rulers. Let us see what they can do.

For their own sakes, they cannot be seen to be found wanting in this crisis. They cannot afford to put themselves in that situation. And some of them must surely realise that brutal fact.

The Analyser: @Hang Babeuf, it’s not up to the Council of Rulers to decide anything. They have no constitutional decision-making power. Nor should they have.

This mess was created by then prime minister Dr Mahathir Mohamad (who resigned). The Agong did the only thing he could do at the time. Now he has run out of options and can only act on advice from the PM.

Hang Babeuf: @The Analyser, yes, you are right. In principle.

The Agong must/should act [only] on the advice of a/the PM. Meaning: a legitimately elected and appointed PM.

The problematic/questionable legitimacy of this PM and his government has plagued the nation now ever since his appointment. That PM's lack of legitimacy has now also become the Agong's problem too.

But it also gives him some necessary [constitutional] "room to manoeuvre" - the possibility of acting on his own initiative to resolve this problem that, as a result of the manoeuvres around him of others, he helped occasion.