A QUESTION OF BUSINESS | Without a doubt the ringgit is historically rather weak even if the economy still continues to grow at a relatively healthy pace – the latest figures show a good growth of 5.8% for the second quarter of the year.

Full year growth of gross domestic product (GDP – the sum of goods and services produced) is expected to be a respectable 5 percent, considered to be still healthy given the current environment. Despite 1MDB and other issues, the country’s finances are expected to hold out in the short term.

So why does the ringgit remain weak, trading at levels which are weaker than at the height of the 1997/98 Asian financial crisis? What is it that is happening that keeps the ringgit level depressed? Perhaps it is due to a risk premium on the ringgit following the emergence of kleptocracy (re: 1MDB where as much as RM40 billion could be at risk, as thieves dip their fingers into money borrowed by a government company via bond issues) or apprehension over the ongoing spate of mega projects (re: the RM55 billion East Coast Rail Link whose cost may go to over RM100 billion.

It may be that people fear that the future of the country will be affected by kleptocracy and a dishonest government that may put the economy in grave danger in years to come. Unless such a perception lifts through a change in government or definite shift in policies and implementation, the capital markets are going to place a lower value on the ringgit to compensate for that extra risk – the kleptocracy risk premium.

The movement of the ringgit over the years tells an interesting, compelling story. Up until the early '70s, the exchange rate of the ringgit was fixed, but when the world moved largely to floating rates, the ringgit as well as the Singapore dollar actually performed well initially – up to about 1980.

That meant the Singapore dollar was appreciating against the US dollar. Singapore obviously did not pursue a weak currency policy, and allowed its currency to appreciate in the belief that the economy could compensate by having higher value-added industries and services. 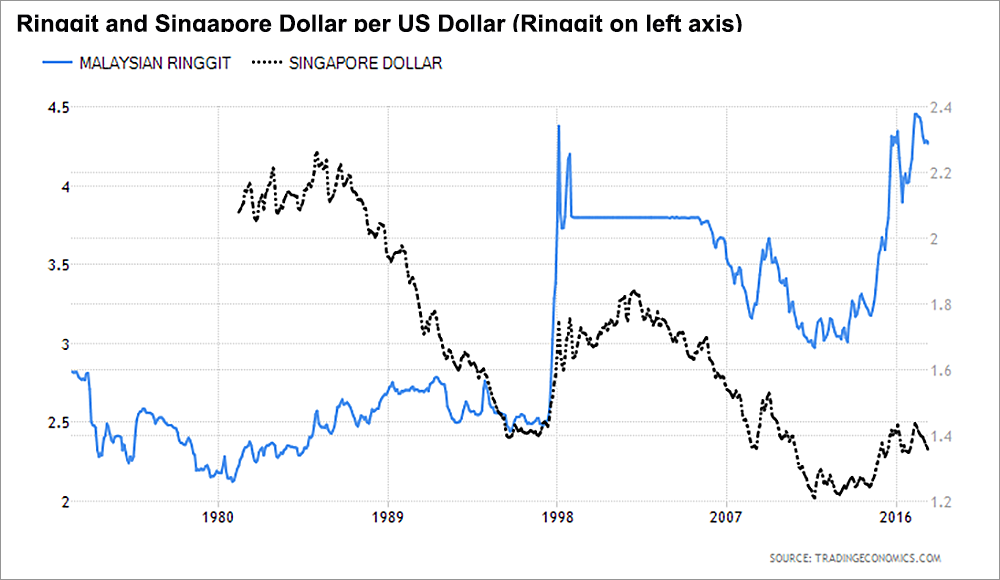 Malaysia under Mahathir, however, opted for cheap labour, allowing unrestricted imports of labour, often illegal, from Indonesia, Philippines, and later Bangladesh. Manufacturing tended to be on lower value-added, such as assembly of electronics.

The Asian financial crisis of 1997/98 saw the ringgit collapsing to as low as RM4.71 to US$1 from pre-crisis levels of around RM2.50, a level it has never since achieved although it strengthened to around RM3 during the world financial crisis in 2009, which coincided with Najib Razak becoming prime minister. Currently, the ringgit at around RM4.30 is weaker than the pegged exchange rate of RM3.80 imposed in 1998, at the height of the crisis.

While the Singaporean and Malaysian currencies were on par right up to around 1980 – indeed in the two countries, they were exchangeable for one another – it changed after that. Over the next 37 years or so, the two currencies moved terribly out of line and the Singapore dollar is now worth over three times the ringgit.

This has broadly reflected the widening gap in economic development between Malaysia and Singapore, with Singapore far outpacing Malaysia in all areas including educational levels, infrastructure, GDP per capita, quality of life etc...