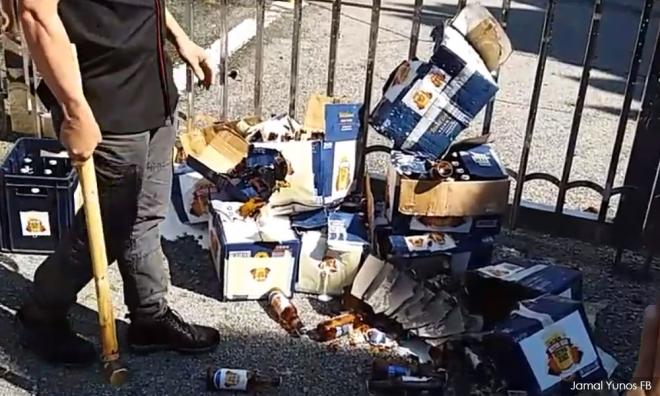 Smokescreens that hide the real issues

It’s been awhile since we heard about Jamal Md Yunos, the leader of the Red Shirts and Sungai Besar Umno division chief. I thought he had to retire from the limelight and concentrate on his failing (failed?) seafood restaurant. But I guess not since he is back in the news!

On Thursday, Jamal and his men had driven right up to the Selangor Menteri Besar's office in Shah Alam, took out several crates (twenty, to be exact) of beer and proceeded to smash the crates and all the bottles in front of the building’s gates.

He said that he was sending all this beer to Menteri Besar Azmin Ali and that he and his "gang" can enjoy drinking all the beer they want, but they had to do it inside the office building instead of anywhere outside.

This is, of course, in response to a report in Utusan Malaysia saying that Azmin had approved a beer festival in the state, ignoring police advice. However, his strategic communications director Yin Shao Loong has said in a statement that this was a lie.

The Selangor MB's office has challenged Utusan to provide the proof that he had uttered such a thing. His lawyers will be issuing a letter of demand to the newspaper asking for an unconditional retraction, public apology and damages.

What is funny is that every time Jamal Md Yunos pulls a stunt like this, the media and members of the public will all go into a frenzy. They will report about it, talk about it and spread all the pictures, videos and article about it.

Everyone will be obsessed with it and this becomes a perfect smokescreen to cover up real issues that the public needs to be paying attention to and discussing. Issues that are more pressing such as corruption, security, economics and politics.

We see a lot of these sensationalistic issues that become smokescreens for bigger issues. Last week, we had the big hoo-ha about the laundrette in Johor that had a sign saying they do not want to serve non-Muslims because of cleanliness issues...