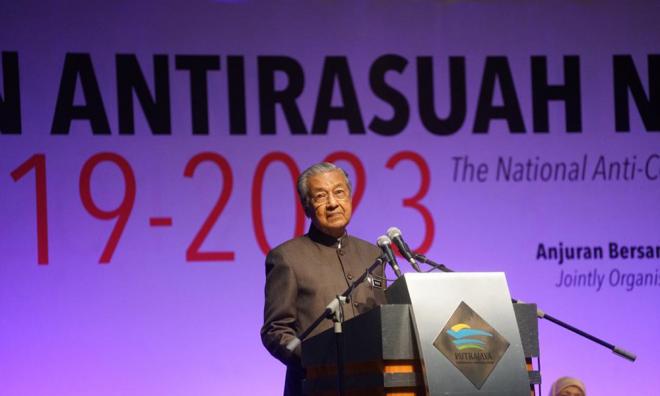 QUESTION TIME | Think carefully about this - what would you do to fight corruption if you were prime minister of Malaysia and had support from your coalition to do it?

Dr Mahathir Mohamad chose his path - to set up a committee to make its recommendations. Yes, yet another one after a number which had been set up since 2004, a year after he stepped down as prime minister the last time.

Last week, the National Centre for Governance, Integrity and Anti-Corruption (GIACC) under the Prime Minister’s Department presented its National Anti-Corruption Plan (NACP), which was launched by the prime minister.

As a plan, it has all the necessary ingredients for a good one, including a timeline for action and monitoring, which are supposed to be done by the GIACC itself. But it is not clear what would be done if deadlines are not adhered to. Some of the timelines seem excessive - within five years, for instance.

But first, let me tell a story of what happened on the day the report was released. I sat down and listened to an Indonesian female worker, a self-confessed orang kosong, a person without papers, as she told her tale of woe the night before.

She lives in an illegal kongsi (settlement). The night before, there was a raid by “police officers” - she wasn’t sure if they really were police but they were in uniform. They did not detain anyone but took all the valuables of the illegal workers, including cash and jewellery. She lost RM300 but she hid her jewellery.

She was angry and provoked. “Perompak!” she shouted at them, “Kau bukan polis. Kalau nak duit, pergi kerja-lah.” One of the “officers” raised his hand to hit her but her husband averted the violence by grabbing hold of the would-be assailant’s hand. She was still fuming as she related the story.

She took out a business card, with the name of a guy and his company on it. On the reverse side were a number of rubber-stamped imprints. She claimed she paid RM50 each month for one stamp and from time-to-time had to show it to police officers to avoid payment when she was stopped. This time it did not work.

We all have heard such stories before. Stories abound of how policemen’s pens hover above the summons books for a long time while they ask offenders if they want to selesai (settle) things. Much more serious offences have been levelled against the police...