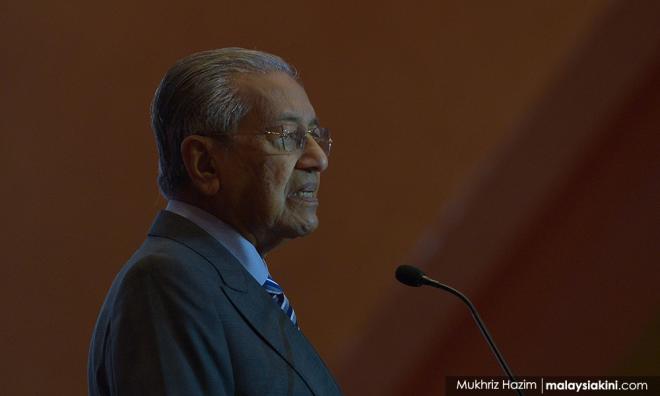 I’m not sure about the knick-knacks and paddy whacks, but that nursery rhyme is playing in the back of my mind as I write this because as far as I am concerned, Dr Mahathir Mohamad is fiddling while Malaysia Baru burns.

One of my first columns for Malaysiakini was called "How to make two years last forever" (Feb 26,2019) – in which I posited that our power-hungry prime minister was going to find ways to hang on to his post in defiance of the promise made to the people who voted in Pakatan Harapan.

Sure enough, by hook and by crook, the old man is hanging on, still speaking vaguely about a transition of power and conjuring up more and more reasons to entrench himself (and his cronies) in power. It’s my belief that he has no wish to spend another day of his life as the ex-prime minister.

What’s worse is that the once vibrant and legitimate opposition has been silenced because its members are now part of his floundering government, while what should have been a totally discredited group of Umno and PAS characters is gaining traction among the less educated populace (who are clearly not lacking in numbers).

Is it any wonder that we reach what was supposed to have been a marquee year in our nation’s history – with a severe deficit of hope?

I’m going to be 47 this year and thus, was in my mid-teens when Dr M launched the idea of Malaysia as a developed nation in 2020. Despite the fact that he had already proved himself to be authoritarian by clamping down on the press, the judiciary and political opposition, it was a bold and glittering vision.

But no one has done more to undermine his stated goal than the man himself. It’s as if he is incapable of understanding what a developed nation really is.

The stifling of intellectual freedom and the fostering of an immense brain drain in which non-Malay talent was sacrificed in the tens of thousands annually for the sake of ketuanan.

The suppression of labour movements and keeping our workers on unlivable wages before turning in panic to millions of migrant labourers.

Pushing for vanity projects and trumpeting national cars instead of building public transport.

Creating a class of out-of-touch and corrupt billionaire entrepreneurs while failing to tackle the problems of the Malay B40, let alone that of other groups.

Completely mismanaging our currency - which if you recall stood at 1:1 against Singapore’s when Mahathir took power in 1981, and now is a humiliating RM3.04 for every Singapore dollar.

In our culture of flattery, the Umno PMs were all called father of this that and the other. The fourth and seventh prime minister is not just the Bapa Pemodenan Malaysia, but also the granddaddy of Malaysian racism and the godfather of corrupt crony capitalism. In the 1980s he had the strength and authority to address these issues, but instead he played on them to stay in power.

In a knowledge-based, ultra-competitive future in which smaller nations like ours are likely to be caught in sphere of influence politics between the likes of China and the US, Mahathirism has left Malaysia a sitting duck.

Yet even now, when the by-election results of Semenyih and Tanjung Piai should be sending a clear picture of grassroots sentiment in the Peninsula, the prime minister is bypassing the truth and he is being aided and abetted in this.

Do we think his old friends like Daim Zainuddin, Taib Mahmud, Kadir Jasin and co are keen on seeing Anwar (above) at the helm as promised? Now there are new sycophants like the Education and Youth and Sports ministers to laud his every move as if their futures depended on it, which of course, they do.

Being still skilled in Machiavellian ways, he has bolstered his standing with party-hoppers from Umno, and gotten even PAS to support his premiership.

More gallingly, he has played a group of PKR MPs like a violin. Instead of recognising the current position of strength of the party, they are on a suicidal collision course - serving his goals, not Reformasi’s. They are like a group of people whose failure to study history means they will soon be nestled in its dustbin if they don’t wake up.

He also seems to have the undying devotion of many members of a community that is one race, but pretends to be another.

So we stand even more impatient on issues of economy and justice. Najib Abdul Razak and Ahmad Zahid Hamidi are still not behind bars. Jho Low is still on the run. The missing pastor is still missing. From Teoh Beng Hock to Altantuya Shaariibuu to the National Feedlot Corporation (NFC), all sorts of probes and revived cases are ongoing, but nothing has been delivered yet.

When ex-PKR stalwart Latheefa Koya was appointed MACC chief, the conspiracy theory alarm bells were sounded – will it be genuinely to clean up the country, or will we see some cases opened against the PKR president at a crucial time when he begins to press for a succession date.

Progressive Malaysians were excited by talk of law reforms when it came to the death penalty, the decriminalisation of certain drugs, particularly for medical purposes, a fairer deal for Sabah and Sarawak, and the establishment of a body to govern police brutality and other crimes - let’s not forget they were implicated in both the Pastor Raymond Koh and Muhammad Adib Mohd Kassim inquiry. None of this has materialized under Mahathir.

Instead we lurch from one unnecessary crisis to another – like the Jawi khat issue and the continued presence of Zakir Naik.

Also in Mahathir’s New Malaysia comes what appears to be a flagrantly racist move of targeting long-dead movements of the Communist Party of Malaya (defunct in 1989) and the Liberation Tigers of Tamil Eelam (defunct in 2009) when everyone knows which broad grouping of individuals are most in the news for carrying out active acts of terror.

What is clear is that almost no one is happy with the current situation, and the person most responsible for it is the doctor. Hopefully, 2020 will be the year in which we can finally say – the doctor is no longer in the house – Mahathir has left the (prime ministerial) building.

Will Anwar deliver us from all our problems? I doubt it. Is he also likely to be unduly influenced by his own group of cronies and favourites? I suspect so. Is he too, a product of a rotten system? Sadly yes, he too is.

And yet, he is the best hope we have. The only way out that can restore some faith in Pakatan Harapan being a reformist government that will take Malaysia into the future, not mired in the past.