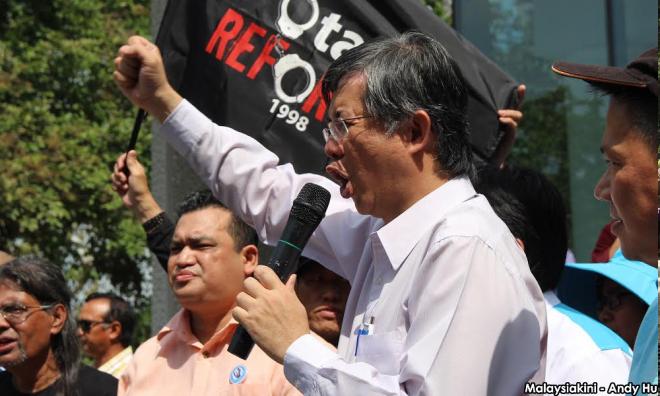 Tian Chua must be released immediately

The Malaysian authorities must immediately and unconditionally release opposition lawmaker Tian Chua, who Amnesty International regards as a prisoner of conscience, imprisoned solely for exercising his human rights peacefully.

Tian Chua, a member of parliament, has been imprisoned for one month after being convicted of entering a “restricted area” in a police training centre (Pulapol), Kuala Lumpur, where he was detained after being arrested for participating in the 2012 Bersih 3 rally which called for electoral reform.

At the Court of Appeal, Tian Chua stated that he no longer wished to appeal the decision and instead would spend a month in jail as a mark of protest of his treatment and the unjust criminal justice system.

The arrest, charge and imprisonment of a sitting MP after he participated in a peaceful protest is an alarming abuse of power by the authorities, and part of a pattern of repression against outspoken but peaceful critics of the government in Malaysia.

While withdrawing his appeal, Tian Chua mentioned in open court that he was brought to the supposed “restricted” location by police when they arrested and detained him, a clear reprisal for his participation in the rally.

Tian Chua still has two cases pending in court, carrying a term of imprisonment of up to three months and an additional fine of more than RM4,000, which puts him at risk of being disqualified from public office, and from running for public office in the coming elections.

Tian Chua’s imprisonment comes amidst a wider crackdown on freedom of expression and other forms of peaceful political dissent in Malaysia.

In the current political climate, critics of the government and human rights defenders are criminalised, prevented from carrying out peaceful activities and stifled with multiple criminal charges.

In the past few years, Malaysian authorities have investigated and arrested a range of individuals including activists, journalists, lawyers and opposition politicians all of whom were peacefully exercising their human rights.

Moreover, there is a concerning trend of prosecutors ardently appealing acquittals by the courts or requesting higher, more punitive sentences on human rights defenders.

The Malaysian government uses a wide range of criminal laws to target human rights defenders, such as the Sedition Act 1948, the Communications and Multimedia Act 1998, the Peaceful Assembly Act 2012, and the Security Offences (Special Measures Act) 2012.

The colonial-era Sedition Act allows for the harassment and intimidation of critical voices and all these laws have overbroad, vague definitions of offences which can be and are exploited to stifle peaceful dissent.