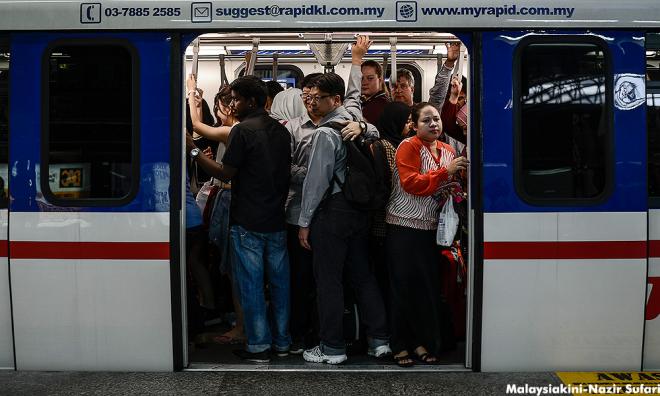 The 'real' Malaysia: Seeing the positive around us

LETTER | Last year, I relocated to Kuala Lumpur – my birthplace where I had grown up mostly in – after almost 13 years. I recently decided to use more public transportation to be environmentally responsible. I have no excuse not to as KL has an impressive integrated railway network with LRT, MRT, BRT, Monorail and KTM now.

Taking public transportation is an experience itself as you get to see a cross-section of people and how they interact with each other in close proximity. I want to share four experiences this week that made me hopeful and optimistic about the future of Malaysia.

I am waiting for the monorail during the rush hour. The train arriving in the platform is packed and I step aside to allow people to disembark. I see a visually-impaired old man with a walking stick (an Indian) trying to make his way out slowly from the train. He was not looking for help, but I see a young girl in school uniform (Chinese) walk up to him and offer help. She holds his hands and helps him walk from the train to the platform. As the train left the platform, I could still see her holding his hands and help him towards the stairs.

I have deliberately mentioned the ethnic identities of the old man and young girl here as this is a reminder for us again how humanity transcends racial boundaries in the real, everyday Malaysia. The political rhetoric aside, I see so many examples of Malays, Chinese and Indians every day – the humans of Malaysia- who are inclusive, compassionate and respectful of each other.

After a long and hectic week, I am looking quite exhausted as I board the train to KL Sentral. The train is almost full even at this hour and there is no place to sit. I happily find a place to stand as I am only four stops away. I am pleasantly surprised when two young people I have never met insist on giving up their seats for me. One of them tells me, “Bro, you should sit…” I must be looking very tired, but I want to joke “Thank you, I know I am overweight but neither pregnant nor old.”

The two considerate people keep on persuading me that I should sit and I continued to politely decline with a smile, till I said goodbye to them at my stop in KL Sentral. I leave the train very touched by how kind and considerate these two total strangers were to me – they didn’t know me, but we were bound by a sense of humanity and compassion.

It is getting late as I wait for the last or second-last train back home. The electronic ticker says the next train will arrive in eight minutes. I find a place to sit in the waiting area. As soon as I sit, I find a middle-aged man next to me looking very troubled and drawing my attention to a person next to us. I see this Caucasian guy lying down almost flat on his face. It seems he had a fun night out and perhaps too much to drink. He is passed out with his phone ringing, but it does not seem he will take it up anytime soon.

The good Samaritan next to me is getting more and more anxious by the minute – our train was now only five minutes away and counting. He shares his worry with me that the other man may fail to wake up, miss the last train and get stranded in the station. He tells me, “We have to wake him up lah... I tried already, let’s try again.”

He immediately stands up and tries to wake up the man again, this time with me joining him in his good cause. The suspense is building up as the train is three minutes away now. We finally succeed in waking up the man before our train arrives.

The socially responsible person next to me looks very satisfied he has been able to save someone from trouble and inconvenience tonight. I am pleasantly surprised and my faith in humanity restored by this action of a random stranger being so concerned about another person’s well-being. We are not as apathetic as we often think we are and I also realised good deeds are contagious as he got me involved in his mission to wake the other man up.

I am the last and only passenger as the bus arrives for the last round tonight. I get on the bus but miss my stop. The bus reaches the next stop and I am about to get off. The bus driver realises from my body language I was at the wrong stop. He looks very concerned, but I told him not to worry. “Don’t worry, lah. I can Grab or walk back, it’s very nearby,” I assure him. I didn’t expect it, but it is late and the bus driver wants to take me to the right stop.

The bus driver does the next round to drop me off in the right stop before calling it a night in the depot at the end of the line. I am again very touched how a random stranger who doesn’t even know me feels so concerned and responsible to get me to the right stop with an additional round, even though it was my mistake that I missed the right stop.

These are not stories I have heard from others but what I experienced myself on public transportation, which showed me the best of Malaysia. We may take it for granted or forget it sometimes, but the fact is Malaysians can be one of the kindest, helpful, caring, considerate, ethical, compassionate, thoughtful, polite and respectful people possible. I wish the same was true for all other cities in the world, but I don’t think it is so.

It is not enough to build infrastructure if people don’t have the right values and consideration for one another. It is heartwarming moments like these I mention here and many more I experience every day that make me feel Malaysia is in the right direction.

What makes everyday, real Malaysia so special is that Malaysians can be humane and compassionate beyond racial, religious and other differences. We can call this "Malaysian Exceptionalism", which makes this country so beautiful and stand out in the region.

There may be gloom and doom stories making the news, but we must not forget to see all the positives around us. There is enough reason to be optimistic and hopeful about the Malaysian people and society. This is the Malaysia I grew up in and I can still see every day.

We must build the bridges
12 Mar 2019
The king’s timely address to all Malaysians
12 Mar 2019
Three reforms we Malaysians must undertake
7 Mar 2019
A government of vision, diligence and unity
6 Mar 2019