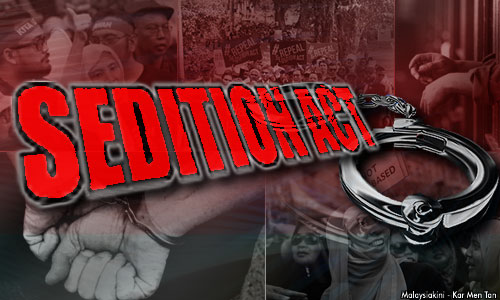 LETTER | Gerakan welcomes the announcement by the minister in Prime Minister’s Department that the Pakatan Harapan government plans to abolish the Sedition Act by this year.

It is long overdue and the Harapan government must not backtrack again on its promise to abolish the notorious Act.

Gerakan has always been a part of the calls to abolish Sedition Act, we were part of the efforts to narrow its definition and condemned selective prosecution, and we continue to envision its eventual abolishment.

Harapan’s manifesto promise to abolish it echoes our call and we are supportive for its implementation.

We understand that Harapan government had imposed a moratorium on oppressive laws including Sedition Act when it came into power last May but in December, the Cabinet made a U-turn by lifting the moratorium.

Worse, several individuals were arrested under Sedition Act again despite the promise that it will only reserve on issues involving national security, public order and race relations.

The Harapan U-turn in lifting the moratorium and arresting individuals shows that the Sedition Act and any new law to replace it could be abused by the Harapan government, going back on its own word to abolish it and protect free speech.

It spells the need for us to closely monitor what is actually the ‘new formula’ proposed by the Harapan government to deal with sedition, it is because Harapan suffers a credibility deficit, we need greater public scrutiny to prevent the introduction of a new law that could be a new ‘Sedition Act’ in disguise.

The Harapan government should show its commitment and sincerity by first dropping all pending charges under this repressive law immediately without condition.

It was recently reported that Human Rights Watch points out that Harapan's reforms on the human rights front a year after coming into power have been a “profound disappointment."

The government has done little to fulfil its promises and had even back-pedalled. We hope it will do the right thing this time.

If the Harapan government does repeal the Sedition Act, does Malaysia need new laws to restrict hate speech, given the existing Penal Code provisions that criminalise inciteful speech? We call on the government to clarify it.

New laws should not be enacted to protect the government or privileged groups from constructive criticism, or worse, to persecute vulnerable minorities.

Any new law must have a valid purpose and in conjunction with broader efforts to promote equality and non-discrimination. Any new law considered must also be narrow in scope, or it risks ending up as a replacement for the Sedition Act.

Gerakan welcomes the move to abolish Sedition Act, but we are also cautious and reserved over what is the next.