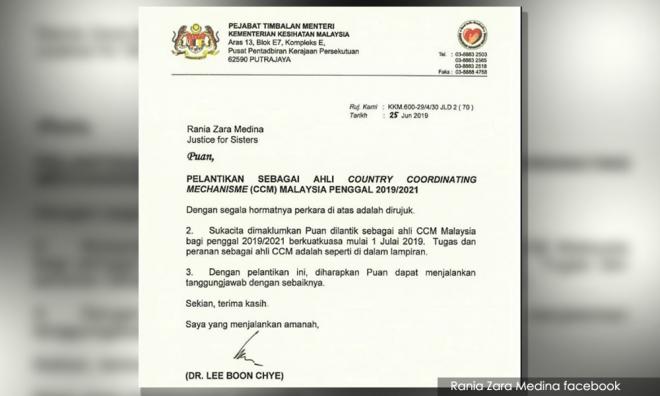 LETTER | This country never seems short of brouhaha and the ones that seem to make the most noise are the politicians and keyboard warriors on social media. Even if something is good, they will choose to look at the negative and twist it to make it political.

The latest "drama" is the appointment of Rania Zara Medina to the Country Coordinating Mechanism (CCM) Malaysia. There has been an outcry on social media and by various politicians whom I fear are raising a stink without really understanding the issues at hand. Rather, they choose to focus on the issue that a transgender has been appointed to this committee

Do any of us really know what the CCM is? According to the Global Fund, Country Coordinating Mechanisms are national committees in each country that submit funding applications to the Global Fund on behalf of the entire country. They include representatives from government, the private sector, technical partners, civil society and communities living with the diseases of Aids, tuberculosis and malaria.

To further explain, the Global Fund is an international organisation that works to accelerate the end of these said diseases. They mobilise and invest more than US$4 billion a year to support programmes run by local experts in more than 100 countries.

As required by the Global Fund, each member country forms a CCM that includes membership from targeted groups include transgenders, men-sex-with-men, female sex workers, drug users and people living with HIV/Aids.

So now that you understand the cause, isn't this a good thing? Isn't the appointment of a transgender to represent the views of that community a good thing? Shouldn't the cause be greater than yourself and your narrow, myopic view and bigotry?

Apparently not. The appointment of an LGBT individual seems to be unacceptable to several politicians and social media users. The latest to create a kerfuffle is the head of Wanita Umno, Dr Noraini Ahmad.

She was most recently reported to have slammed the appointment, claiming that LGBT groups have gender dysphoria that goes against the values and beliefs of the majority in the country and is now demanding an explanation from the government.

You know, corruption and crime go against the values and beliefs of the majority in the country. So does underage marriage, sexual harassment and a whole plethora of other ills that you seemingly choose to ignore.

According to various news reports, easily found on the web, Rania is not the first transgender to be selected to sit on the CCM. So dear Wanita Umno, why politicise this now when clearly this used to happen under the previous government that you used to belong to? Why did you not make a song and dance when this happened before under your watch?

It is time to stop politicising everything. Let's look at the good that our fellow brothers and sisters can do regardless of their sexual leanings. There are, after all, esteemed members of our society - doctors, engineers, lawyers, accountants, journalists, F&B outlet operators and dare I say even some politicians who may be LGBT - either openly or not.

We never seem to bat an eyelid when we seek their expertise so why not practice the same thing now? Truth is, these people who are not "recognised" and thus are not supposed to exist in our society, actually do.