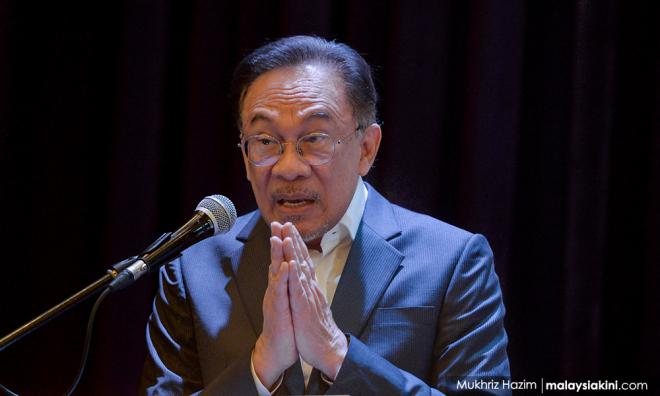 On Anwar Ibrahim assuming the premiership

LETTER | We can never predict how Anwar Ibrahim would behave and govern this country if he assumes premiership.

But one thing is sure, for him, it is would be an arduous journey when compared to other prime ministers who came before him.

I must say other prime ministers had not gone through the same scrutiny or suffered the same suspicion as him. All of them were essentially chosen from within the “establishment” so to speak.

Even in and out of prison, Anwar had played a significant role in galvanizing the opposition then and in no small way contributed to Pakatan Harapan’s victory in the 14th general election.

Today, however, he is very much outplayed and outmanoeuvred. Sadly, it is members of his owned PKR party that is causing the most damage.

Some have questioned Anwar’s ability and leadership quality. But for the last twenty years, had he not remained the most resilient and tenacious leader even while he was in the wilderness.

I guess it is easy to have second thoughts on Anwar as PM for now. He is out of power, but his friends and colleagues have attained power.

If Anwar is made PM today, would some of those in PKR and Harapan be so bold and determined to go against him? I doubt it.

Similarly, Anwar’s political enemies and vested interest group may also want to prevent him from attaining power. They may find him more difficult to handle than a leader chosen from within the “establishment”.

The issue of Anwar becoming PM is essentially based on how his friends and colleagues choose to honour their words against each other. It is also based on how much real change they yearn to see in this country.

I have no idea how Anwar’s leadership and ability will play out in the future. I have no idea he will adhere to “business as usual” or he will set a new path for Malaysia.

But I long for a leader who will reset this country. We are wallowing in the mud for far too long already.

Looking at the way we govern the country, we may not have clean water to drink in the near future. This is how urgent we need a leader who can provide us with a new paradigm.