EXCLUSIVE When Anne Ooi arrived in Kuala Lumpur eight years ago, this Penangite was no political animal. But the move to the city centre was a pivotal change - climaxing in the events of July 9 - the day an iconic picture of 'Auntie Bersih' was captured. 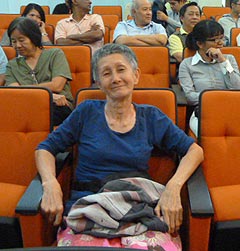 The image of a lone, elderly and frail woman clad in a yellow T-shirt, drenched to the bone in chemical-laced water amid the backdrop of a vanguard of riot police flanked by water cannon trucks, has become a symbol of resilience and resistance in the face of oppression.

After much reluctance and contemplation, Ooi mustered her courage to speak out for the first time in an exclusive interview with Malaysiakini in Kuala Lumpur on Tuesday.

"When I came to KL, the Five Arts Centre was already doing shows. They pointed out many things about the government to create awareness. Since my daughter is involved in the arts scene, her friends were my friends. I didn't know anyone else in KL," she said.

"Marion D'Cruz did a piece on the Internal Security Act; Chee Sek Thim did one on May 13 (1969), called That was the Year, and it just went on and on and I enjoyed those performances because fun was poked at the government," she added.

The Five Arts Centre is a collective of artistes and producers dedicated to generating alternative art forms and images in the Malaysian creative environment, which includes theatre, dance, music, visual arts and a young people's theatre.

The 65-year-old retiree said the works and efforts of the creative community were an 'awakening moment' about what was going on in the country.

'I marched against injustice'

Indignant over the state of the country, Ooi, an English language teacher who had worked in government schools for 35 years, took to the streets in the heart of KL, together with tens of thousands of fellow Malaysians in the Bersih 2.0 rally.

The rally, organised by electoral reform group Bersih 2.0, may have been to champion free and fair elections, but for Ooi and many others on that day, it was more than that. 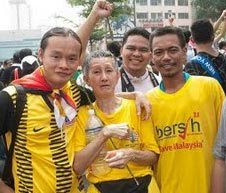 On protest day, Ooi had made her way into a locked-down KL alone - in her bright yellow T-shirt armed with nothing more than a pouch wrapped around her waist - under the watchful eyes of the "black crows", as she referred to the police.

Little did Ooi know that the 'dirt' she thought of would become a powerful image on the Internet that would eventually serve as an inspiration for many netizens.

As the photohraph of this resilient ' Ah Ma ', drenched in chemical-laced water fired by the police spread across cyberspace like wildfire, netizens set up Facebook fan pages in her honour.

The most prominent among these is the ' Malaysian Lady of Liberty ', with close to 41,000 likes.

While netizens started dropping messages of admiration on the fan pages, Ooi was less than pleased about her new-found fame. 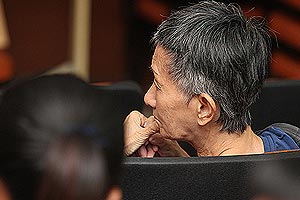 "It was just an ordinary walk, but day by day, I was stunned by the fan pages. I couldn't accept it... it was overwhelming for me.

"I just don't want to see anybody anymore. I wasn't sure how I was going to live my life. How am I going to walk to the market or to church?" she lamented.

Spooked by her sudden celebrity status, Ooi, who lives on her own, sought refuge in her daughter's house.

"I have another son in Penang. My daughter passed the information to him and he cried. He was speechless, and he and his wife cried. After that, my son said, ‘I will be with you next time'.

"One more son, he got on the phone with me and was angry. He asked, why did I have to do this, that I should not do it again," Ooi added.

However, after the shock, Ooi admitted that the sudden turn of events could be used as a force for the good of all the people. 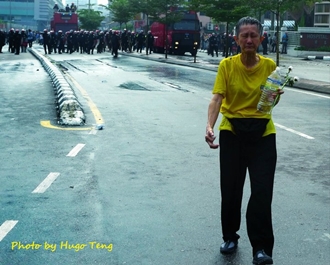 "At first, I just wanted to kill them all. Why did you do this to me? I didn't give you permission (to take my picture)," she said in reference to the iconic image of her taken by photographer Hugo Teng and its dissemination on Facebook .

"But now, I have to thank him for his creativity. The country needs to see everything in action, and I will thank him one day," she added.

Asked if she wished the Facebook "madness" - as she called it - would stop, Ooi said that it depended on what it was used for.

"Sometimes (there's) the vanity, right, and I get a bigger head! I know there is power in these kinds of things... I can use it to get whatever I want, but my son did ask me, ‘Ma, do you know what this is? The young people are starting a silent revolution, and you are in it, they need you there'.

"So, do I want it to stop? For that, no. If using computers, networking (with) one another, passing information here and there, feeling anger - good anger - and acting upon it, I don't want it to stop.

"But if it is just for honour, I want it to stop. I don't want honour, it's not mine. It's everybody's fight." she said.

Asked if her children had framed the photograph in the house, Ooi shot it down in her fluent Hokkien dialect, saying that it was too embarrassing for her.

Ooi also expressed her gratitude to the Facebook community, but hoped that the praise would stop and that the experience would not change her in ways that are bad.

"I just want to say I'm very grateful and I don't deserve this. I'm just an ordinary person.

"Things are being put in my hands now - here's a handphone, take this book, corruption starts from taking little things... I don't want to be corrupted.

"I want my own clean life back, I just want to be with my God and work with the poor and do what people need me to do," she said. 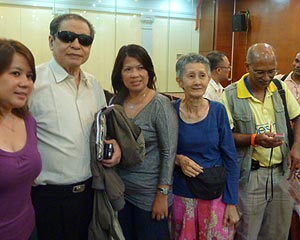 However, there is one thing that has changed since Ooi's roller coaster ride over the past 10 days - she has promised herself that she will polish up her knowledge about Malaysian politics.

Just as the image of Ooi at the Bersih rally has served as an awakening for many Malaysians, her traumatic post-July 9 experience has done the same for her.

"Right now I need to read up; I've been left behind, I've been living selfishly. I have to read up everything about politics, about parties.

"In this week itself, I read what Raja Petra (Kamarudin) said, about Lim Kit Siang's detention (in the past)... I didn't know a lot of people were imprisoned," she said.

For many, ‘Auntie Bersih' Ooi is an idol, but to the woman herself, she was simply an ordinary citizen playing her role in the greater struggle for a better country.

This interview was jointly conducted by Kow Gah Chie and Nigel Aw.

Auntie Bersih: The arts were my awakening

Auntie Anne - the making of an iconic image