MCA had in a private meeting with US diplomats conceded that the ethnic Chinese in the country was being marginalised but could not admit it as it was bound to support the government's position and by extension, Umno. 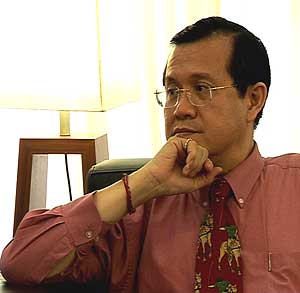 This is according to a confidential cable between Washington and its embassy in Kuala Lumpur released by whistle blower site Wikileaks, detailing a meeting with the embassy's political office with then MCA vice-president Ong Tee Keat ( right ).

"Of course we are marginalised, big business to small stall owners know that - but MCA cannot admit it," he was quoted as saying to US diplomats.

Ong who later went on to become MCA's president before being ousted by Chua Soi Lek, had, according to the cable, said that the party had to remain silent over Chinese discontent.

According to the communiqué, Ong was quoted as saying that "silence is sometimes the only valid response" in reaction to Chinese constituents' discontent over MCA and Gerakan's support of the government.

The cable detailed the former MCA president's lament that the party could previously get Umno's "leftovers" for development projects but now had to rely on what little it could get from the dominant coalition partner.

"There was once a day in Malaysia when MCA would get the leftovers, but now we are just hoping to get some crumbs from the Umno table," Ong reportedly said in the cable.

An example cited was the Ninth Malaysian Plan where none of the 180 planned new schools were vernacular and only two were given after protests from the minority communities.

The cable also said Ong admitted to deep discontent among the Chinese community against the status quo and that MCA would face its greatest electoral challenge in the coming general election.

His concerns became real in the 2008 general election, in which MCA saw its seats in Parliament halved from 31 to 15, while Gerakan was swept out of its home state, losing all its state seats in Penang.

The cable is part of more than 250,000 US State Department communiqués with its embassies throughout the world, leaked to Wikileaks, which has been releasing them in stages since November last year.

Repeated attempts to reach Ong for comments have been futile.

MCA marginalised: Then why stay in BN?

Everyone but Umnoputras 'marginalised' in M'sia

Only the rich of all races not marginalised