COMMENT When we launched Malaysiakini 11 years ago, we knew it would be difficult for a neophyte website to make a political impact. After all, netizens were few and far in between, and their laborious 56k modem didn't help matters either.

Making a political impact was the easy part. Few journalists at that time dared to thumb their noses at Dr Mahathir Mohamad, and we stood out like a sore thumb.

Indeed, the hard part was keeping Malaysiakini financially afloat. When the dotcom bust came in 2001 - two years after we went live - the writing was on the wall: Malaysiakini cannot survive on advertising alone.

Our decision to go subscription was a difficult one. Everyone said we would fail. True, who would want to pay for Internet content? We were alone. There was no one to help us. We had to build the payment technology from scratch.

But there was no choice. On Aug 16, 2002 - the day Malaysiakini went subscription - we made this appeal:

"No online news site has proved to be sustainable. The most successful ones are offshoots of their print cousins, and are invariably bankrolled by them. Few are truly online outfits. Most of these are in dire straits.

"Which is why we are now forced to face a Hobson's choice: Lock up the website and stand to lose our readers - and there is no guarantee we can still survive - or continue to keep Malaysiakini free until we bite the dust in the coming months.

"The journalists in Malaysiakini have made our choice. We now leave it to our readers to make theirs."

And our readers did make their choice. Many supported Malaysiakini by contributing a small sum every month to enable us to continue to cover - and in a small way, influence - the tumultuous events that eventually took place in our country.

Content providers - newspapers, television and radio stations - are facing problems everywhere. It's technology and telecommunication companies that are reaping the rewards of the Internet.

Advertisers no longer rely exclusively on journalism to deliver eyeballs the way they once did with old media, and they need not depend on local websites to do the job. Our competitors for the advertising dollar include, among others, top global giants.

Indeed, none of the top four online companies - Google, Microsoft, Facebook and Yahoo - are media companies. They and 45 others control over 95 percent of the global online advertising market.

Anyone outside this elite group faces intense competition for a relatively small pot of money. Malaysiakini , whether we like it or not, is competing with the likes of Google for advertising. 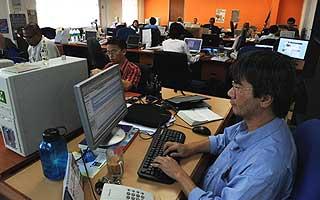 s such, the harsh reality is that subscription is one way - and for now, perhaps the only way - to support independent media.

Which is why independent Chinese online daily Merdeka Review , with the help of Malaysiakini , went subscription this month. Without this, Merdeka Review will inevitably face problems of long-term sustainability.

And to provide a level-playing field, Malaysiakini Chinese website - which had been free since its launch in 2005 - too went subscription.

If we fail to make subscription work, then the future of independent online media will be a lot bleaker.

But to be truly independent, a news website needs diversified sources of income. Given this, Malaysiakini is looking beyond subscription and advertising to fund our operation.

Increasingly, an additional source of income is through selling our content. Early this year, we signed a deal with Yahoo, where the search engine is given the right to use some Malaysiakini content on its website in return for a fee.

It is public knowledge that The Malay Mail will soon be relaunching as a paid morning daily as opposed to a free afternoon paper. And it has approached several online players, blogs and international news agencies for content, Malaysiakini included.

So it came as a rude shock to us that a simple content proposal - and a deal that is far from being concluded - has been spun by a couple of news sites into a content-for-share swap.

Let us make it clear - we have no intention of owning a single share of The Malay Mail or to surrender the ownership of Malaysiakini .

But content syndication - which provides funds for Malaysiakini to serve our subscribers better, as well as an avenue to reach even more readers - makes good business, and journalism, sense.

Moreover, selling our content does not affect our editorial stance. Those using our content have no say in it - they have a choice to either take it or leave it. They are not even allowed to alter the content.

We are surprised that our online competitors failed to understand this economic imperative. But then again, perhaps they don't need to worry about money, since they are getting it from somewhere.

So, is Malaysiakini selling out to Umno? Over our dead bodies.

It is a principle that we hold dear in Malaysiakini , and one which we have painstakingly worked to protect over the past one decade. We are not going to abandon it for anything. Even cold hard cash.

'Don't sell your soul to the devil'

STEVEN GAN is co-founder and editor-in-chief of Malaysiakini .