When contacted, Mohd Nazri Abdul Aziz, the Minister in the Prime Minister’s Department who was present at the meeting, confirmed this.

"Yes, it's true... But I did not summon them. I was invited by the deputy prime minister to explain to them," he told Malaysiakini today.

This was done even though, at the last week’s cabinet meeting chaired by Prime Minister Najib Abdul Razak, the initial decision to reprimand them had been reversed . 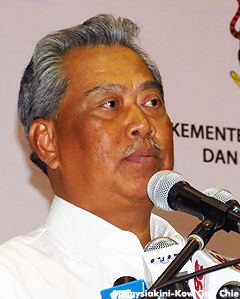 According to government sources, the cabinet meeting on Aug 15, chaired by Muhyiddin in Najib’s absence, had decided to reprimand the two deputy ministers as well as Umno Youth chief Khairy Jamaluddin.

This was later denied by Nazri, who said the reprimand was just a "suggestion" that had been rejected by Najib at the cabinet meeting on Aug 29.

However, Nazri said no reprimand was issued at yesterday's meeting as it was only intended to seek the views of Saifuddin and Gan on the issue that has triggered objections from the Internet community and the Human Rights Commission , among others.

“We wanted to address their concerns ... We are not like the opposition. The moment some of their members disagree with them, they throw them out,” he claimed.

Nonetheless, Nazri noted that the meeting was intended to explain to Saifuddin and Gan the recent amendment to the Evidence Act and that it would have no bearing on the government’s decision to retain Section 114A.

“The cabinet has already decided (to retain Section) 114A, so this was to explain the situation to them,” he said.

Khairy was not summoned to the meeting as he is not part of the government, Nazri added.

Saifuddin, in a series of text-messages to Malaysiakini, described the meeting as "good" but remained steadfast on his stance. 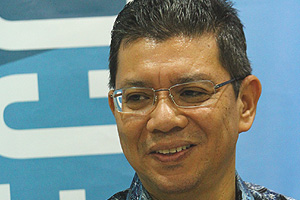 "It was a good meeting. There was no reprimand. It was more of a discussion. Muhyiddin invited Nazri to explain the need for Section 114A and its technicalities,” he said.

"At the end of the meeting, I stated that I still think we need to amend it. However, since the cabinet has decided the status quo and that Nazri is going to meet the stakeholders including the Centre for Independent Journalism, let's leave it at that for now.”

The deputy higher education minister said he had conveyed his concerns about the provision, but that he has a different worldview on the matter.

"My take is that Nazri and I are looking at the issue from two different worldviews.  Mine is from its impact on the political transformation towards a mature and progressive democracy.

"I informed the meeting of my concerns. The wording of the section is too wide, especially the word 'to facilitate' and the need to learn from best practices.”

He added among the best practices were Brazil's Internet Bill of Rights and the UK's approach to this matter on top of guaranteeing that there would be no Internet censorship.

Saifuddin had on Aug 11 pledged to rally like-minded BN leaders against Section 114A, which imposes the presumption of guilt.

Gov't pledged no abuse of 114A, says Gan