Pakatan Rakyat stands just five percent behind BN in popular votes, according to a recent face-to-face survey conducted in the peninsula.

The survey of 1,409 respondents conducted between Dec 26 and Jan 11 by the Universiti Malaya Centre for Democracy and Elections (Umcedel) gives BN a 42 percent chance of retaining Putrajaya, while Pakatan received 37 percent, with a high 21 percent still undecided. 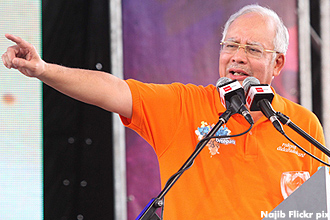 And despite the decline in Prime Minister Najib Abdul Razak's popularity,  touching just 54 percent, the conclusion of the Umcedel team is that BN would retain Putrajaya.

"However, the longer the BN keeps holding back the election, the more detrimental it will be to the ruling coalition," Umcedel's Prof Mohd Redzuan Othman said today.

"There are the 21 percent who remained undecided in the survey. They are indecisive as to who would take Putrajaya and this would remain the battleground.

"However, we know the inclinations, but we cannot not reveal them here," said Mohd Redzuan, who earlier in the week stated BN is likely to retain Putrajaya , but not expected to garner a two-thirds majority.

According to Umcedel's survey, Mohd Redzuan said the majority of the 21 percent who were undecided were Chinese (53 percent), first-time voters (48 percent) and university graduates (43 percent).

The question Umcedel had posed to the respondents was: "In suggesting that they are non-partisan, which parties do they think would win in the next general election and who would be in Putrajaya?"

However, he said that popular vote is not a clear indication as to which coalition would win in the coming general election, given widespread gerrymandering of seats.

Meanwhile, according to the poll, the hottest issues plaguing BN are concerns over its integrity and abuse of power.

Besides those, the other factors which may erode support towards BN are the National Feedlot Corporation (NFC) scandal, Lynas Advanced Material Plant (Lamp), efforts to reduce crime, failure to control price increase and also the coalition’s lengthy duration in running the country.

Meanwhile, the main issue plaguing Pakatan is the internal squabbling amongst the coalition partners.

Those polled also cited weaknesses in Pakatan-led state administrations, the dominance of DAP and non-Malays in Pakatan, as well as its fear of losing political power, as reasons which are turning voters away. 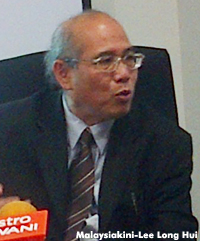 On commenting on the political situation in Selangor, he said there is uncertainty in BN as to who will be the menteri besar should the ruling coalition succeed in wrestling back the state.

“However, those polled, including those working in public and private sectors, like what present Menteri Besar Abdul Khalid Ibrahim is doing.

"Initially in 2010, when the first poll was conducted, there was uncertainty as the Pakatan government was new.

“However, over time, the people can now compare the four years under Pakatan rule to the 50 or so years under BN, with regards to Selangor,” he said.

Similarly in Kelantan, while noting support for BN is catching up, he said the holding factor for PAS is present Menteri Besar Nik Abdul Aziz Nik Mat.

In giving an example, he said of 10 polled, six would say they support PAS, while the remaining four were BN supporters.

“But when we asked what if Nik Aziz were to run (for election), out of the same 10, nine would say they support Nik Aziz,” he said frankly.

BN has been mooting International Trade and Industry Minister Mustapa Mohamed as a possible menteri besar should they win in the state.

The poll also indicated that the Pakatan government has a huge lead compared to BN in Penang.

'BN book given with RM100 aid not to discredit Pakatan'

Girl studying in India, but is registered as voter

EC gets 125 applications for postal voting

The era of super-majority gov't is over