Pasir Salak MP Tajuddin Abdul Rahman is a man who has defied the odds.

Not many politicians can make a comeback after having been sacked from Umno - and still rise again to the position of a deputy minister.

In 1995, Tajuddin challenged then Perak menteri besar Ramli Ngah Talib for the Pasir Salak Umno division leadership - but then his meteoric rise in the party came crashing down after he was sacked from Umno for money politics.

He was re-admitted into Umno after three years in the wilderness and being patient this time, he was finally elected as Pasir Salak MP in 2008, after Ramli Ngah retired.

In Parliament, Tajuddin is notorious for his abrasive language - which include words like "keling" and "bastard" - which he brought into the government when he was appointed as agriculture and agro-based industry deputy minister in 2013. 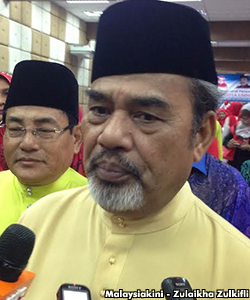 He is now embroiled in controversy over his statement that the Chinese community would be slapped ( lempang ) if they sought foreign help over their grouses.

Tajuddin's explanations of the offending remark, like his career, has been gravity-defying since he first made his statement on Thursday.

In the span of only 24 hours, Tajuddin's explanations ranged from outright denial to claiming that he was misquoted, to saying that it was “just a reminder” and even declaring that it was just “a joke”.

Malaysiakini compiles here the myriad of explanations Tajuddin gave in his very short span of time.

“How can I use the word 'lempang' and so on? That is school kids language.

This reporter, I do not understand her. That is her interpretation.

“I am not a young boy. How can I use that kind of word?

If I say something, it should suit my stature as a veteran politician. How can I use stupid words like that?"

- Tajuddin to The Star Online

"Why should I apologise? What wrong did I do?"

"What is reported by Malaysiakini ... That was not necessarily what I said."

"That was just a joke, it was not part of the press conference, just a joke."

“There were no threats made, be it to ‘lempang‘ or any other form of threats.

“It was just a reminder to the Chinese in Malaysia that if they have a problem, they should solve it internally.

"Do not involve outsiders. Do not think of getting protection from outside."

These varying explanations came despite an audio file uploaded by Malaysiakini . which recorded Tajuddin as using the word "lempang" against the Chinese community.

Tajuddin was quizzed by the media about this and similarly, he gave varying answers to different media outlets.

To Malaysiakini , he said: "You were not there; you just listen to the audio. Audio can be (taken) anywhere. "You tell your editor to better be careful. I’ll get my lawyer to issue a letter to you."

And when Sin Chew Daily grilled him on the same matter, he dismissed the audio recording and demanded for proof of a video recording to show the word coming out of his mouth.

"Do they have a video of it? Was I sitting down or standing? Was it that I had finished speaking and was about to leave?" Tajuddin is quoted as saying.

Read more from this author :
Nigel Aw
Read more like this :
#
View Comments
Most Read
Most Commented
Most Recent