This is despite Low not holding any formal title within Umno, the politician says in a report published by US financial daily The Wall Street Journal (WSJ) today.

A former employee of 1MDB is also reported as saying that there was intense secrecy surrounding 1MDB, with the senior management refusing to share documents on Google.

He also revealed that Low used the code name "UC" when he was dialled into conference calls.

1MDB set aside money for such projects proposed by staff in the Prime Minister's Office, Oh said.

"If we thought it could help the incumbent government pull in some votes, we could propose that," added Oh, who later quit his post due to his concern over the lack of transparency in the government.

According to WSJ, the state fund's minutes also revealed that the board's chairperson had "noted that it is vital for the company to win the support of Sarawakians, particularly the natives".

The government had also sold prime land in Kuala Lumpur to 1MDB in 2010 at below-market rates to develop a financial centre, in a joint venture with the subsidiary of an Abu Dhabi sovereign fund, WSJ reported.

Meanwhile, a leader of the BN, the former ruling coalition in Penang, is reported to have said that Low had returned to Penang, which is his hometown, before the May 2013 election and acted as a senior strategist for the BN.

The leader said that Low told the candidates for the election that if they needed money for their campaigns, they could request from him and he would deliver the funds.

Among the things the candidates requested money for, the leader said, was to paint voters' houses and give out free food and other favours. 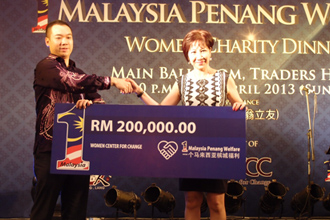 Coalition party politicians from the ruling federal coalition said the money did not flow through official Umno channels and the source of the funds, along with its total size, was unclear.

"The money was flowing like hell," another former coalition lawmaker said, adding that he assumed the funds were from corporate donors.