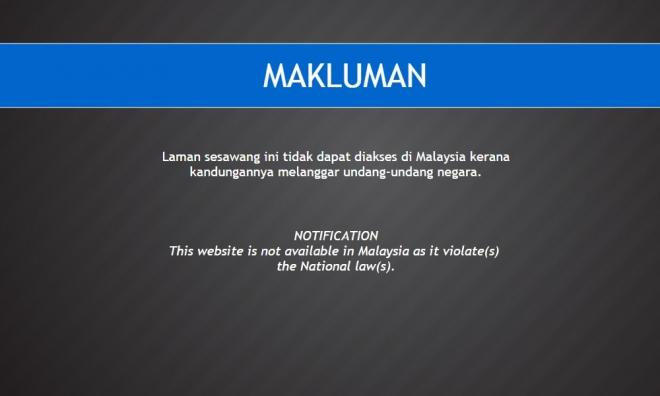 Attempts to access the site yields the following message: "This website is not available in Malaysia as it violates national laws".

The blocking of Asia Sentinel comes as a special government committee formed to police social media recently conducted its first meeting, vowing stern actions against those who expressed dissent against the government on social media.

Authorities have also decided to amend existing laws to give the committee more bite in stopping negative comments against government leaders online.

Asia Sentinel is a regional news site with a focus on Malaysia, Indonesia and China.

The story was a reproduction of an article from whistle blower website Sarawak Report , which also has been blocked by the Malaysian Communications and Multimedia Commission (MCMC).

Sarawak Report has claimed to be in possession of evidence against Najib in relation to the SRC International case, which the Malaysian Anti-Corruption Commission (MACC) has submitted to the Attorney-General's Chambers.

The AG has reportedly returned the investigation papers to the anti-graft body for further clarifications and investigations.

The report also claims that Najib and his family were negotiating so that they would not be charged and would be able to exit the country safely with their alleged fortunes intact.

Najib was probed for receiving RM2.6 billion in his personal bank accounts, as reported in The Wall Street Journal (WSJ) .

He had denied any wrongdoing and claimed that the money was a rather generous "donation" from the Middle East.

Though the reason for the generous endowment differs in the various explanation of whichever minister it was that was defending the Umno president at any one time.

Some had said it was to fight terror group Islamic State, others claimed it was to reward Malaysia for its stance against Israel, or that it was to fund the development of Islam in the country.

However, WSJ claimed that a portion of the money, RM42 million, originated from state-owned SRC International, the money having been allegedly laundered through a complex web of shell corporations prior to being deposited into Najib's accounts.

Najib has yet to address this particular allegation.

Zeti is echoing voices of millions of M’sians