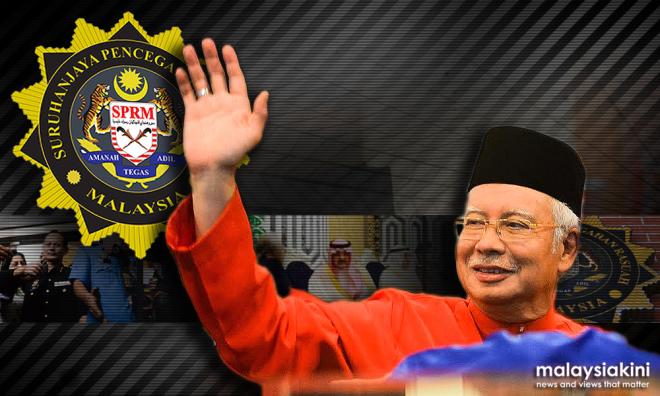 Quoting a source, Reuters said the commission had suggested that the prime minister be charged with criminal misappropriation.

"It's a pretty straightforward case.

"We made recommendations for charges to be filed that the attorney-general instead chose to reject," said the source, who declined to be identified or elaborate on MACC's findings.

Reuters said the attorney-general's office was not immediately available for comment.

Yesterday, Malaysiakini reported that MACC had recommended three charges under Section 403 of the Penal Code.

Sources familiar with the investigations said the charges were related to the transfer of funds originating from SRC International to Najib's private bank accounts.

Those found guilty are liable for a jail sentence of not less than six months and not more than five years, with whipping and shall also be liable to a fine.

"We monitored the money trail and it came from KWAP," said one investigator.

Apart from this, sources also claimed that investigators were prevented from probing the money trail outside of Malaysia.

On Tuesday, Apandi said there were no grounds to press charges against the prime minister and instructed the MACC to close the files.

MACC had submitted three investigation papers, one on the RM2.6 billion and two on the SRC International case, where RM42 million was transferred into the prime minister's accounts.

As for the RM2.6 billion, Apandi said the sum was confirmed to be a political donation from the Saudi royal family, with no strings attached.

He also disclosed that Najib had returned RM2.03 billion in August 2013 back to the donor.

Sources told Malaysiakini that MACC had not mentioned the return of the funds in the papers submitted to the AG.

Najib has repeatedly denied any wrongdoing and accused those making corruption allegations against him of plotting his downfall.

MACC can challenge Apandi in court

‘If panel agrees with AG, then they're PM’s henchmen too?’

Why return RM2b when we need it to fight extremism?

Najib and his billions - beyond mere guilt or innocence

Case closed, get on with life, but says who?

The many twists and turns in trail of RM2.6b