MP SPEAKS The demo by 30 protesters at the Penang Chief Minister Lim Guan Eng’s Chinese New Year open house at the SPICE Arena in Penang yesterday is most intriguing not only as a “no brainer” but whether it is the first “handiwork” of the new czar of Umno cybertroopers, Ahmad Maslan.

An “intelligent” person would not have anything to do with such an un-Malaysian demonstration.

Firstly, it crossed the line which should not be violated by anyone who claims to be a Malaysian by showing open and extremist contempt for another Malaysian’s racial or religious festivities and sensitivities, as this is the first known such demo since Merdeka in 1957 at an open house festivity, whether prime minister, chief minister or menteri besar, to celebrate Chinese New Year or Hari Raya Aidilfitri.

Secondly, the grounds for the protest were so outrageous and preposterous that no top Umno or BN leaders dare to be seen publicly associated with them, as nobody in sane mind would have any respect for such personalities.

Such demonstrations are in fact an attack on the competence, efficiency and professionalism of Prime Minister Najib Abdul Razak, the entire police force, special branch, the Malaysian Anti-Corruption Commission (MACC), Bank Negara and the Attorney-General’s Chambers, that they did not know about the scandal of RM1.2 billion "donation" from Israel to the DAP for the 13th general elections in exchange for an Israeli naval base in Port Dickson.

If there is any iota of truth in the RM1.2 billion allegations first made by political charlatan, one Razali Abd Rahman, the prime minister, the entire police force, special branch, the MACC, Bank Negara and AG’s Chambers would be guilty of gross dereliction of duty and negligence not to know anything about them or not to take any action although the preposterous allegations first surfaced four years ago. 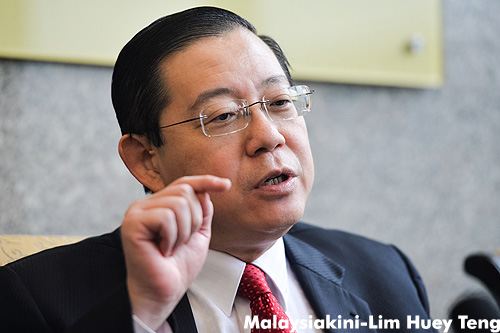 In the event, the authorities had all the resources and time to check on the bona fides of Razali, who even had the temerity to claim that he was the “former special officer” of Guan Eng ( photo ) when he was never in such or any other capacity employed by the Penang chief minister.

The purpose of regurgitating the preposterous allegations that DAP had received RM1.2 billion donation from Israel in exchange for a Israeli naval base in Port Dickson is the same as the attorney-general Mohamad Apandi Ali announcing that he is proposing to amend the Official Secrets Act (OSA) to increase criminal penalties to deter whistleblowers and journalists from exposing malpractices and abuses of power like Najib’s twin mega scandals.

RM2.6b donation is a fact, not fiction

There is now a growing desperation not only among Najib’s legal officers led by attorney-general but also Najib’s political and propaganda arm which include the legion of Umno cybertroopers that the image they have painstakingly built up about Najib’s innocence in the twin mega scandals have no public traction or national and international credibility whatsoever.

Hence the need to distract public attention by investing and regurgitating preposterous allegations like RM1.2 billion Israeli "donation" to DAP to counter the bad publicity accruing to the Najib government over the RM2.6 billion donation scandal.

RM1.2 billion Israeli "donation" to DAP is a downright lie made up out of whole cloth.

Ahmad, as the new Umno IT chief, which made him the czar of Umno cybertroopers, had good reason to hide his hand though he is highly suspect in orchestrating Umno cybertroopers to stage the demo over the RM1.2 billion Israeli “donation” lie and falsehood at the Chinese New Year open house of the Penang chief minister yesterday.

Or will Ahmad deplore the demo at the open house and send a clear directive to Umno cybertroopers to stop retailing lies and falsehoods about the concocted Israeli’s RM1.2 billion “donation” to DAP?

LIM KIT SIANG is the MP for Gelang Patah and DAP Parliamentary Leader.