MP SPEAKS The jubilation over Adenan Satem’s victory in Sarawak is somewhat reminiscent of the Pak Lah ‘tsunami’ in the 2004 general elections.

In the 2004 general election (GE11), Abdullah Ahmad Badawi, or Pak Lah as he is widely known, led the BN to victory by winning a historic 91 percent of the Parliament seats (199 out of 219), with 61 percent of the popular vote.

He went into the election promising to clean up corruption in the country. He promised a collaborative approach by famously asking people to "work with him, not for him".

Pak Lah was helped by a delimitation exercise that added 26 Parliament seats in 2003.

The opposition then also did not present a united front or a united coalition, although three-cornered fights were avoided in the majority of seats.

He was the first prime minister to lead a BN government that did not have a two-thirds control of Parliament. The number of opposition MPs increased fourfold from 20 (nine percent) in 2008 to 80 (36 percent). BN’s share of the popular vote dropped from 61 to 55 percent.

Pak Lah not only failed to clean up corruption but many people perceived an increase in cronyism under his premiership from 2004 to 2008.

Almost all of the promises he made prior to the 2004 general election were not fulfilled, including the establishment of an Independent Police Complaints and Misconduct Commission (IPCMC).

Racial and religious relations were managed poorly, to say the least, including the mishandling of the demands of the Hindraf movement. 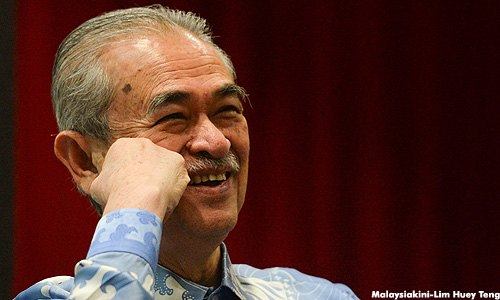 Will Adenan suffer the same fate as Pak Lah?

Only time will tell. But the initial signs are not positive. Padungan assemblyperson Wong King Wei revealed cases of land being sold to politically connected parties just prior to the Sarawak election, which is reminiscent of the modus operandi of the previous state government under the former chief minister, Abdul Taib Mahmud.

Although this revelation did not gain much political traction, if such practices continue under Adenan, he will be proven to be no different from his predecessor.

At the same time, Adenan showed that he could be even more draconian than his predecessor when he banned a record number of opposition MPs and state assemblypersons from entering Sarawak during the state election, including the speaker of the Selangor state legislative assembly.

No MP or assemblyperson from the BN was barred from entering Sarawak or had any immigration restrictions put on them. Is this a sign of the extent to which Adenan is willing to go in order to prevent legitimate political competition from taking place in his state?

Adenan should remember that the political landscape in Sarawak has changed significantly since 2001 when BN won 60 out of 62 state seats (97 percent), with 70.2 percent of the popular vote.

With the opposition setbacks in the recent election, we are back to the situation in 2006 where BN won 63 out of 71 state seats (89 percent), with 62.1 percent of the vote.

In fact, Adenan’s performance is slightly below the results achieved by Taib in 2006.

The electorate in Sarawak clearly does not want to go back to the old days when the opposition hardly had a voice in the state assembly.

If Adenan’s fails to deliver in the next five years, will there be a political upheaval that will sweep even into the rural areas of Sarawak?

The people of Sarawak will be watching very closely at Adenan to see if he can create a positive legacy of his own - or whether he will be another Pak Lah.

After all this time, opposition is 'still learning'

PKR inroads due to strong roots in rural areas

Read more from this author :
Lim Kit Siang
View Comments
Most Read
Most Commented
Most Recent