Tycoon Khadem al-Qubaisi, a key figure in the investigation into 1MDB, has been arrested by the Abu Dhabi authorities.

This comes after reports that Prime Minister Najib Abdul Razak’s stepson Riza Aziz and tycoon Low Taek Jho, better known as Jho Low, were summoned to court to defend themselves on Aug 22.

The two are named as defendants in the United States Department of Justice (DOJ) lawsuits.

Citing sources, US financial daily The Wall Street Journal (WSJ) said the arrest of al-Qubaisi was made in relation to his role in the 1MDB affair.

However, Malaysiakini could not independently verify the report.

al-Qubaisi was purportedly arrested last week. In April, the tycoon was barred from leaving the United Arab Emirates and had his assets in the country frozen.

According to WSJ, al-Qubaisi hasn't commented on the allegations and his lawyer also declined to comment.

US investigators are looking into the Abu Dhabi tycoon’s dealings and funds which were allegedly obtained through fraud.

Last month, the DOJ filed lawsuits seeking to freeze US$100 million of real estate that al-Qubaisi allegedly bought with funds from 1MDB.

Sources also say that investigators were determining if al-Qubaisi had used funds from 1MDB to help finance the world’s fifth biggest yacht.

The DOJ had also exposed a US$470 million money trail that stretched from Malaysia to Abu Dhabi to the British Virgin Islands.

Investigators, therefore are looking for connections to a company that saw itself at the top of the Las Vegas nightclub scene with two US$100 million venues.

The company that runs the Las Vegas nightclubs is called Hakkasan Ltd and is based in London.

al-Qubaisi was chairperson of Hakkasan and a member of its board of directors.

He resigned from the company on May 9, and a new board of directors was named.

Apart from Hakkasan, al-Qubaisi was appointed as International Petroleum Investment Company’s (IPIC) managing director in May 2007, but was abruptly replaced in April last year amid the 1MDB scandal. 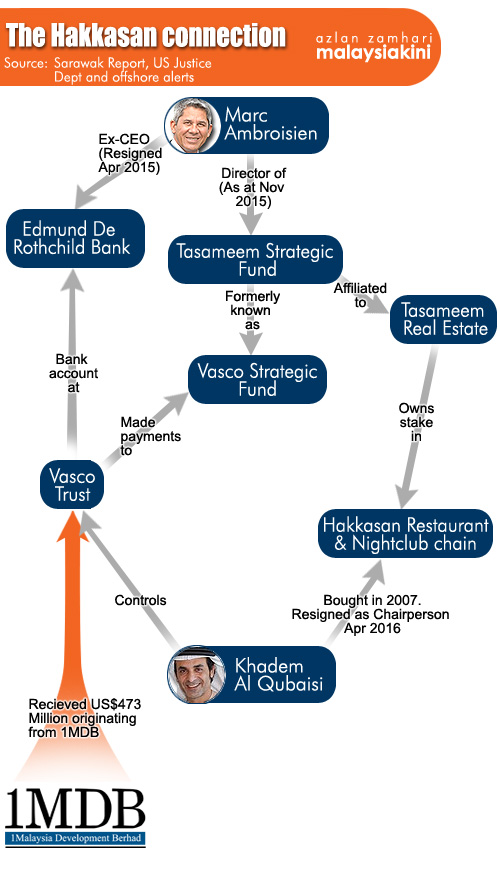