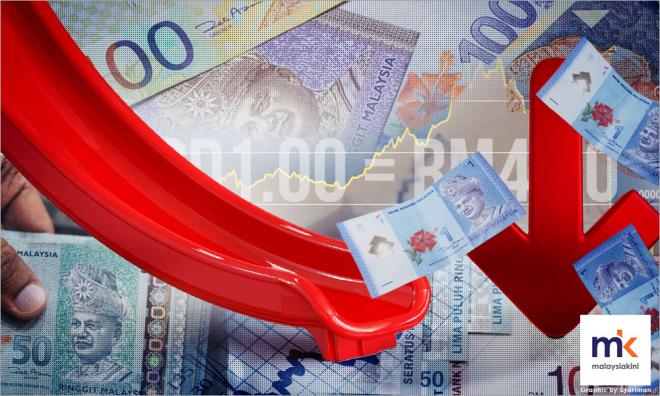 Why is the ringgit suffering worse than its regional peers?

Editor's note: Intractive features in this story are temporarily not available in app. Kindly view on mobile or desktop browsers for best experience.

KINIGUIDE When international financial newspapers made this damning declaration in November last year, the ringgit had fallen to RM4.46 to the US dollar.

Only a week into 2017, it continued to slide to RM4.50 against the US dollar, raising fears that the plunge could go beyond the RM4.88 level in 1998 - the worst in the ringgit's history.

In this edition of KiniGuide, Malaysiakini takes a look at how bad the ringgit is really faring and what are the factors behind the currency's weakness.

Did 2016 see the highest fall of the ringgit in recent years?

Actually, no. The worst fall in recent times was in 2015 when the ringgit exchanged for 18.7 percent less to the US dollar compared to the year before.

This was in line with a regional decline with Indonesia (-10 percent), Thailand (-8.65 percent), Singapore (-6.46 percent) and the Philippines (-5.36 percent) also seeing their respective currency fall against the US dollar but Malaysia was the worst hit.

By the end of 2016, the Thai baht and Indonesian rupiah saw a slight recovery with their value increasing by 0.61 percent and 4.17 percent respectively against the US dollar.

Singapore saw a slight decline against the US dollar in 2016, falling by two percent.

While the Philippines peso performed worse than the ringgit in 2016, declining 5.16 percent against the US dollar, it did not suffer such a dramatic fall in the preceding year like Malaysia did.

Therefore, the ringgit's decline of 3.96 percent against the US dollar in 2016 - at a time when the currency desperately needed a recovery - was still a painful one as it plunged to its worst level since the Asian financial crisis.

What factors are affecting the ringgit's strength?

The norm has been to blame the scandal-plagued 1MDB. However, blaming 1MDB alone is an oversimplification of the issue as the ringgit is affected by a myriad of factors.

Many of the factors boil down to one simple question: Do investors have confidence that Malaysia can withstand economic shocks and fulfil its short-term debt obligation? If they do not, demand for the ringgit will fall and so will its value.

For the layperson, it is a question of how much savings you have and how much you owe on your credit card.

Banks aren't likely to loan you money if you owe too much and own too little, and if they do, you will be charged higher interest rates, which may make your debt problems worse.

The same applies to a country and a similar scenario is considered by institutions such as the International Monetary Fund (IMF) when assessing how vulnerable a country is.

Among benchmarks used for a country is its international foreign reserves (your savings) and short-term external debt (your credit card debt)...