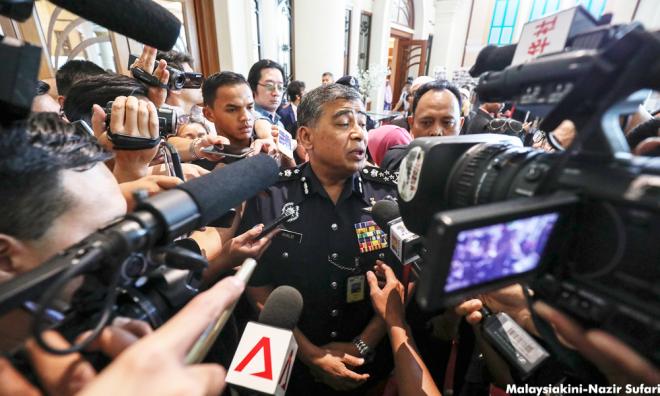 YOURSAY | ‘What the IGP and AG need to do is dig deeper into their conscience.’

IGP: AG told us to dig deeper into 1MDB

IGP had said the police had concluded their investigations, which perhaps resulted in the AG announcing (in January last year) that no wrongdoing was committed by PM Najib Razak. Despite having said that, he subsequently instructed the police to investigate further.

So, tell us IGP, are there still materials to "dig" that can implicate Malaysian Official 1 (MO1)? And AG, is there a possibility that you may rescind your "no wrongdoing" announcement against Najib soon?

How is it that when the US Department of Justice (DOJ) is dead sure that the 1MDB fund had been misappropriated by people managing it and when some countries had succeeded in prosecuting and imposing punishments for being complicit in the 1MDB scandal, our authorities are still grappling with the issue?

Do they still believe that you deserve to be in your solemn post that is entrusted upon you to protect us, despite your incompetence and foot-dragging?

Odin Tajué: The police, the AG’s Chambers, the Malaysian Anti-Corruption Commission (MACC) and Bank Negara Malaysia (BNM) are obviously not at all interested in seeing those who have allegedly taken vast sums of money from 1MDB (and SRC International) for their personal gains brought to book. One notes the four points that follow which support the idea.

One, in his response to the now three-day-old statement from the Bar Council, Apandi has implied that DOJ’s findings were inconsequential and thus the investigation into the alleged 1MDB scam needed not be reopened.

Two, the Auditor-General’s Report on 1MDB, which purportedly revealed serious hanky-panky in the sovereign debts fund, such as US$7 billion unaccounted for, has been classified a state secret.

Three, the sting of the Public Accounts Committee (PAC) report has been diluted by the chairperson, ‘Mr Cari Makan’, who seems to have, on his own, deleted at least one incriminating fact.

Four, while the authorities in several other jurisdictions have found instances of wrongdoing related to 1MDB and have prosecuted individuals and taken action against the financial institutions involved, nothing of that sort has happened in Malaysia.

One understands very well, Mr IGP, that it is very difficult to convince the public that the sun rises in the West, or that black is white, or that any other similar truths are untruths.

Who is not telling the truth?

Middle Path: These two are circus clowns, except none of their antics are funny. More like stupid.

Just a Malaysian: The first thing for the duo to do is to dig deeper into their conscience and based on their professed religious teaching, do what is morally and ethically right.

Unfortunately, when the culprits were about to be charged in court, the task force was disbanded and the then attorney-general forced to go into retirement due to "health reason".

Whilst we are still digging, the authorities in US, Singapore, Switzerland and Luxembourg have brought legal action against the financial institutions involved. Some banks were forced to close or fined. Several bank staff in Singapore were given jail sentences and some banned from certain financial activities.

In Malaysia, however, the legal and law enforcement agencies are impotent and incapable of taking any meaningful action against the alleged treacherous acts of the kleptocrat. So, all they can say is they are still digging.

Basically: Wow, two years later, suits in US and convictions, suspensions of banks in Singapore, etc, but Malaysia is just still “digging”? And they get upset when people call them incompetent and other hard-to-accept truths?

Is this a repeat of the Pek Moh (former Sarawak chief minister Abdul Taib Mahmud) case and MACC taking decades to go through 'mountains of documents' despite video evidence by Global Witness?

Or maybe they just want to be doubly, triply, quadruply sure it's not a misunderstanding because Malaysia is the cleanest country in the world, right?

Kingfisher: To anyone knowledgeable on criminal matters, the impression created may be one of being professionally thorough or a kind of back and forth to stultify matters.

To the ordinary layperson in the street, the suspicion is that while agencies in a number of countries investigating the 1MDB fund abuses have promptly concluded and even prosecuted alleged crimes, the authorities here seem deliberately disinterested in getting to the truth.

What is left to get deeper into the truth while the filth has overflowed on to the surface and the stink has reached our very doorsteps?

The onus now is with the AG's Chambers to explain, by speedy action, reasonable facts and logic to clear the continuing murky atmosphere here surrounding this internationally notorious homegrown scandal.

At the least, we need it to protect the nation's international standing. Otherwise, the stain may disadvantage our socio-economic development by impacting us negatively in international trade in the global economy.

Anonymous #44199885: It has been months since the story broke on the alleged misappropriation of funds. IGP, while Singapore, Switzerland, United Arab Emirates (UAE) and DOJ have commenced action, you are still digging.

No need to dig so much, for we already know the hole in the public purse is humongous. The evidence for you is all available in Singapore, UAE, Switzerland and the US. They will be happy to share the information with you, if you will only ask them.

They have already dug quite deep and found misappropriation of US$4.5 billion, and seek to recover US$1.7 billion. All you need to do is arrest Jho Low and his coterie. Surely, this can’t be all too hard for you professionals.

Malaysians are demanding immediate action to recover our money and more importantly, to save our nation from kleptocracy and shame.

Nobrain: Is it dig deeper or bury deeper?

6th Generation Immigrant: Ostrich burying head in the sand - that’s what digging deeper will lead to.