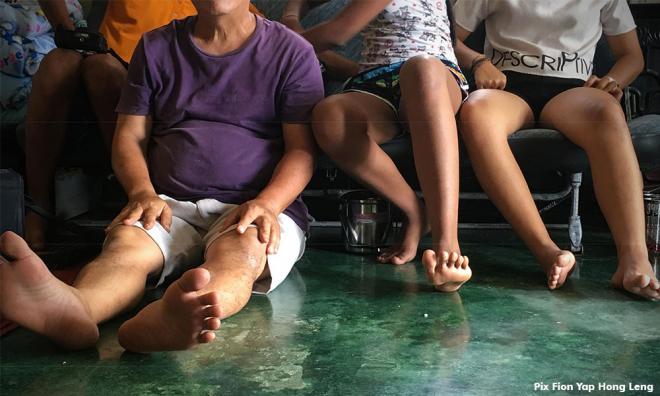 Why care about stateless children?

FEATURE | I first came across the term “stateless” last year, when I was working on an article about Malaysian senior citizens who hold red identity cards.

My research done, I began planning a feature on stateless people in Malaysia which I hoped would draw more attention to this marginalised group. But as I was still studying in Taiwan at the time, I did not have access to the information I needed to complete this feature. I decided to continue my work during my university winter break in Malaysia.

As I continued my research over the winter break and after several discussions with my interview partner and photographer Hong Leng, questions began to surface: Why was there no detailed public information on stateless children? Why did some proposed policies come to nothing? Why did the authorities seem to have no understanding of local policies regarding statelessness?

The source of the difficulties faced by stateless people in Malaysia slowly became clear to me.

I tried contacting a local NGO which had done previous work on stateless people, but the phone number provided on their webpage was invalid. I could not reach the group via e-mail. Attempts to contact other NGOs also went unanswered.

Meanwhile, our search for stateless children who were willing to be interviewed was not going well either. Time was running out, and my stay in Malaysia was coming to an end. As a last resort, I decided to look for help on Facebook in the hope that social media might provide some leads (I realised later on that this act was inappropriate, as I could have contacted relevant organisations directly or paid a visit to schools to inquire if there were any cases they knew of).

Eventually, one of my friends on Facebook offered some help, and I finally got to know A-Qing (not her real name) and her family. Things took a turn for the better after this.

Upon my return to Taiwan, I encountered more difficulties. Attempts to contact Malaysian government agencies to clarify policies were especially hard. Government and civil society organisations alike would pass the buck to each other, sending me on a wild goose chase; some of them promised to come up with an answer but then never got back to me at all.

Dealing with the buck-passing led me to wonder at the attitude of both civil society and government agencies. Separate agencies were unfamiliar with one another’s operations, and NGOs surprisingly lacked knowledge of government policies. There was no effective communication or information flow between government and non-government organisations, leading to a nationwide lack of awareness about stateless people.

I began to consider the role the media could play. In Malaysia, each racial group reads newspapers written in their respective mother tongues. Reporting in a single language would not be enough to attract national attention. My feature would have to at least be written in Mandarin, English and Bahasa Malaysia to reach a wider demographic and start a discussion.

But even then, reporting in all three main languages of Malaysia might still be insufficient to draw interest. While in Malaysia over winter break, I called an experienced newspaper reporter to inquire if there were any relevant resources I could use, he replied, “you need to work on more interesting stuff.” Statelessness, to him, was too “boring” for the average Malaysian reader.

At first, I thought I could link the issue to human rights. This seemed like a good hook which could draw more interest.

The Universal Declaration of Human Rights (UDHR) emphasises equality among humans and each individual is entitled to citizenship. To me, though, the declaration has not been able to provide protection to stateless children. In reality, stateless children have no rights, even under the UDHR. Their lot has not improved in the slightest.

I eventually decided on a more practical approach: an analysis from a legal perspective that would introduce the concept of a “child protection framework” to explore and improve that issue gradually.

Rome wasn’t built in a day, and the improvement of the situation of stateless people will require more work from both the public and private sector.

I also believe that there is a prerequisite far more important than just “political will,” which has been mentioned several times in the first and second parts of this series. The will of the public plays an important role, whereby each and every individual in Malaysia should make an effort to understand the issue. Further understanding of the issue is the key to effective change and improvement.

My ultimate aim in writing this feature was to answer the question: why care about stateless children?

The reasons are many: because I am a Malaysian; because stateless people do exist in Malaysia but they are marginalised; because they have no rights; because this is a human rights issue; and because I wish to contribute something to this country.

These reasons are pure, yet simple. One does not need a strong reason to decide if one should care about anything. Your objective can be very simple, as long as you believe that it is the right thing to do. Ultimately though, I believe that nationality should not be the source of discrimination and oppression.

This article was first published in Chinese in The News Lens here. Malaysiakini has been authorised to publish the English version, which was translated by Ziqing Low, Chee-An Ng and Hui-Yee Chiew.