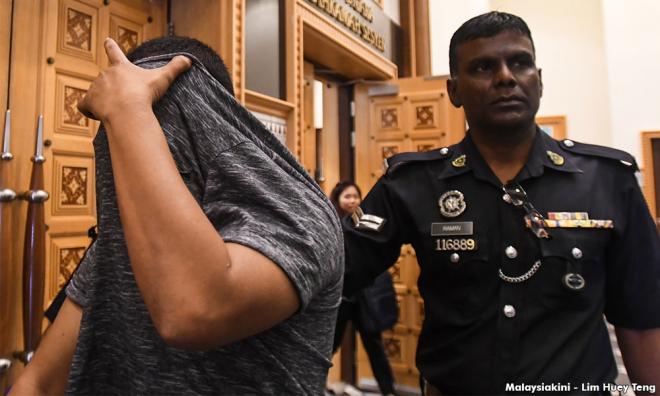 The mountain of charges against a man accused of raping, sodomising and sexually abusing his teenage daughter suggests that the victim endured the ordeal at least three times a day for the past two years.

Deputy public prosecutors Nordalina Ali and Aimi Syazwani Sarmin affirmed this, stating that the acts were done on a somewhat routine basis.

This allowed the prosecution to frame the 631 charges based on the 15-year-old victim's statement.

"Her statement was based on memory. It became habitual (the assault) without fail," Nordalina told Malaysiakini.

The prosecution only managed to read out 182 charges today, with the rest slated to be read out tomorrow when the special court for sexual crimes against children reconvenes.

The man had claimed trial to all charges.

Earlier, the 36-year-old unit trust agent, clad in a dark grey T-shirt, kept his head low when he arrived a few minutes before 9am today. As he was led out from the court room during lunch break today, the man had his face covered with his shirt.

Nordalina had earlier argued against granting him bail as the offences were non-bailable offences, the victim was his biological daughter and that there is risk of the accused not attending the proceedings

"He was detained at the apartment, which was the same place where he committed those offences. If bail is granted, we are concerned that the accused will disturb the victim and her mother as the report was lodged by the mother," said Nordalina.

The accused is being charged with 631 charges under the Sexual Offences Against Children Act, the Child Act and the Penal Code.

From the 182 charges read out today, the accused had purportedly committed the atrocious acts at his home in Petaling Jaya between January to July this year.

He was charged with 30 counts of committing physical sexual assault against his daughter between July 11 to July 20 this year. The assaults were made at the house's main bedroom around 6am, 1pm and 11pm on all the days, except July 18.

Charged under Section 14 and 16 of the Sexual Offences Against Children Act, the man can face up to 20 years in jail and whipping.

He was also charged under Section 31(1)(a) and 31(1)(b) under the Child Act for sexual abuse committed against his daughter between January 1 to July 20, this year, which carries a maximum jail sentence of 20 years or a fine, or both.

The man was also charged with raping the victim under Section 376A of the Penal Code on July 21. He can face a maximum 30-year jail sentence and whipping if found guilty.

The 150 sodomy charges under Section 377C of the Penal Code read as of today saw him purportedly sodomising his daughter between January and March this year.

The man divorced his wife two years ago and the former couple's eldest daughter's hellish ordeal began after she started living with her father.

Nordalina and Aimi told Malaysiakini that the man's daughter decided to tell her mother her ordeal after her father made known his plans to take his younger daughters to live with them.

Nordalina said the girl's mother lodged a police report against the man on July 25 before he was detained the following day.