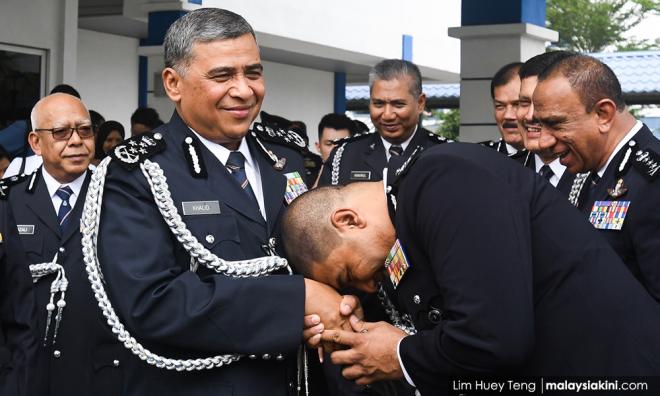 YOURSAY | "He is the first IGP to defy a court order with impunity."

Khalid: I've done my best and I've no unfinished business

Kingfisher: Khalid Abu Bakar's declaration on retiring as inspector-general of police (IGP) that he had done his best and has no unfinished business left to settle might sound rather hollow if not hypocritical to his many critics for his shortcomings in office, and they may now be glad and hopeful that the PDRM (Royal Malaysian Police) ought to be in much better standing without him.

Khalid, in fairness to him, had assumed – it is obvious now – the top PDRM position at a very challenging and admittedly a troubling time for the nation in respect to investigation and enforcement of law and order, especially on allegations related to 1MDB as well as other matters such as the challenges concerning the duality in civil law and religious law aspects on conversion – the separation of children from their individual parent.

The IGP is supposed to carry out his duty without fear or favour. Not Khalid. He forgot he was the IGP. He thinks he is the security chief of the Umnoputras.

May his misdeeds and deeds of omissions in the execution of his official duties come to haunt him in his ‘retirement’ years.

Your job is far from done, Khalid. Perhaps, to redeem a very small portion of your misdeeds, and since you have offered to continue supporting the force, you could consider sponsoring CCTVs to those police stations and lock-up facilities still lacking such cameras.

And, as a final thought, Sarawak Report editor Clare Rewcastle-Brown is going to miss you dearly. You've been such a colourful personality in her life as well as ours. We wish you joyous hours of culinary exploration.

Vijay47: Khalid, I read that you are going to be a cook. That makes my prediction pretty accurate, that a person of your calibre is only suited at best to be a nasi lemak seller. You say you have done your best and run the good race, a conclusion you alone hold in the whole country.

Alas, you will always be known as the police officer who was an abject failure, the cases of pastor Raymond, the child kidnapper, the countless custody deaths and thambi Gopi will forever haunt you as areas where you failed the nation, the king, and even the jihad you profess to adhere to.

It is perhaps fitting that you hold delusions of becoming a chef because when the government changes, you will be the first person we will drag across the coals, you are going to be grilled and roasted.

You will soon no longer have PM Najib Abdul Razak and DPM Zahid to bail you out, the spice to our hopes is that your goose will be cooked, well done. Not medium rare.

Truthseeker: He is the first IGP to defy a court order with impunity. Indeed, he has set a very bad precedent.

Kangkung: Khalid, tell us why is Gopinathan Krishnan calling you and your family members? Isn't Gopi the ‘intermediary’ in a major police protection racket involving gambling dens and prostitution houses in Malacca? So why do you have business with an alleged criminal?

Ozzie Jo: There is no denying that he has been loyal, but not to the country, not to his God, only to his earthly master. Hopefully, he lives long enough to receive his just desserts, excuse the play on culinary terms…

Annonymous: The suffering rakyat and countless victims of corrupt officials in power, pray for Allah's divine intervention to install a clean and non-corrupt government with power to do justice for the many victims of corruption and abuse of power and to arrest and charged all those corrupt officers in power (past and present) who protected corrupt officials and criminals and failed in their duty and responsibility to protect the interest of the people and country.

Karma has no dateline and we reap what we sow.

Aries46: It is un-Malaysian to be unkind to one who is bidding farewell. So let's agree with Khalid that he has done his best.

The only difference is he is assessing "his best" to his masters and to Allah, while the people view his performance to his oath of office and the nation. So, even in parting, we differ. But let us be magnanimous in our Malaysian spirit.

Chief of police to sous chef

Kangkung: Khalid and a score of top cops received calls from jailed suspect Gopinathan Krishnan, who allegedly collected bribes from operators running illegal businesses that would be channelled to the police.

Of course, there won't be a royal commission of inquiry (RCI) to find out.

Your "karma" would definitely follow you. You have to pay in one way or another and also would be blessed if you did your work diligently.

Anonymous_1371947202: Hopefully, he does not get scalded by the broth he has been stewing.