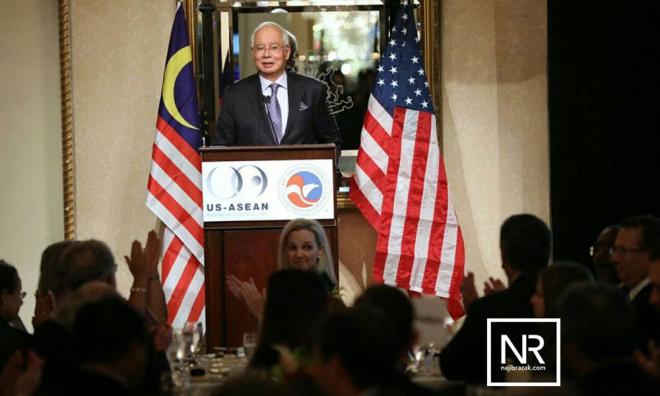 Prime Minister Najib Abdul Razak told US industry captains that there was a campaign to deliberately sabotage 1MDB to undermine Malaysia's economy.

At a dinner with the US-Asean Business Council and the US Chamber of Commerce yesterday, Najib told participants that the ultimate intention was to topple the government.

"I know that some of you will have heard some less positive stories about the Malaysian economy, particularly about 1MDB.

"Rather than brush the issue under the rug, we ordered investigations into the company at a scale unprecedented in our nation's history.

"And, when it became clear that there had been failings, I instructed that the company be rationalised. This is progressing well and many of the assets formerly owned by 1MDB are thriving," Najib is reported as saying by NST Online.

He told his audience that the matter was blown out of proportion by opposition leaders and cautioned investors not to be persuaded by "noise" from the opposition.

"I should remind you that while there were issues, certain opposition politicians in our country blew them out of proportion.

"Indeed, there was a campaign to deliberately sabotage the company and undermine investor confidence in our economy, in a failed attempt to topple the government in between election cycles," he said.

"And I quote: 'The Malaysian economy has continued to grow at a rate well above the international average'," said Najib.

Najib said Malaysia's economy grew by 5.8 percent in the second quarter of this year, compared with the same period last year.

He said the current account surplus has widened and investments rose by 7.4 percent.

"Latest figures also show that inflation is well under control, with the CPI registering a rise of just 3.2 percent in July," he said.

Najib arrived in Washington DC on Sept 11 for a three-day visit, including a visit to the White House on Sept 12.

Najib at White House for meeting with Trump

A lopsided meeting between Trump and Najib

Twitterjaya baffled by PM's pledge to 'strengthen' US economy

Unusual for Najib, Trump to meet while 1MDB under probe, says US official