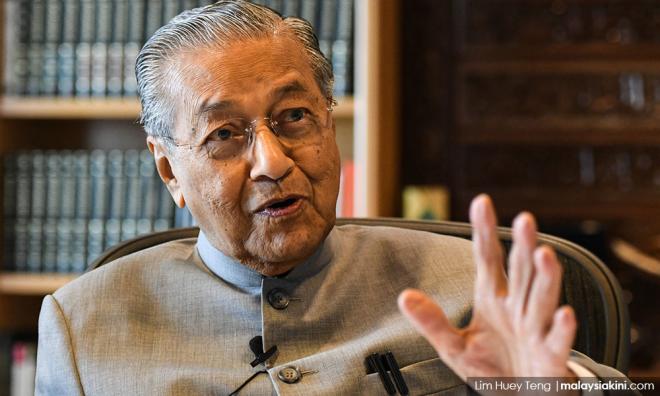 YOURSAY | ‘He should commit in writing to reforming our democratic institutions and processes.’

David Dass: Former prime minister and Pakatan Harapan chairperson Dr Mahathir Mohamad has accepted blame for the detention of over 100 people in Operasi Lalang 30 years ago, and also expressed regret over the torture experienced by some detainees under the Internal Security Act (ISA).

However, he stopped short of apologising for the incident, insisting that the crackdown was not his decision.

And what did the police think that they were doing with the physical aspects of interrogation and the treatment of detainees as if they were hardcore subversives or terrorists?

Mahathir has gone as far as he will go. Perhaps it is time to move on. Hammer out the joint Harapan manifesto. Make a written commitment to reform our democratic institutions and processes.

Prudent: Yes, let's move on. As for apologies, it's his discretion. Let's move on even though there were clear patterns of political expediency and bias in that the real perpetrators of the tensions – Anwar Ibrahim and Najib Razak - were not detained.

And I cannot believe that Mahathir did not know that torture was used on the detainees. The trial of Joshua Jamaluddin, an ethnic Malay Christian, revealed clear details of torture.

But now Mahathir has said that he has repented, I, as a Christian, will forgive him and try to forget what he has done. Let God be Mahathir's final judge, as God is the final judge of us all. And may Mahathir be able to clear his conscience with God.

Ravinder: Mahathir was quoted as saying, "I accept the blame even though the detention was not my decision."

This is hard to swallow in a country where the law enforcement agencies, in cases which are not everyday matters, will act on their own. They need a prod or a green light from the top to act, not necessarily written instructions.

Proarte: Mahathir contradicts himself. If he released 21 ISA detainees when he first came to power, then surely he had the power to do so!

So what is all this nonsense about him not having the power to object to the detention order by the police? It does not add up, just like the 1MDB “donation” coming from an Arab prince.

Ipoh PP: Mahathir has accepted the blame for Ops Lalang. Let’s move on and try to remedy the problem at hand - Malaysian Official 1 (MO1) and the alleged money taken.

I notice some are not happy and still want his “pound of flesh”. What more do we want? Leave the past and see what’s happening in front of our eyes today.

The 14th general election will soon be upon us. So let’s bring change and save this country.

Sam04: Well, at least he has gone part way to admitting his culpability, which is something, and perhaps we will get some more as time goes on.

But while at least he has partially admitted the wrong of ISA under his watch, our current prime minister has admitted nothing at all and continues to maintain his innocence despite the mountains of evidence against him, not only here in Malaysia but also all around the world.

I'd take Mahathir and his truly gracious wife over Najib and his wife.

Finally Dr M acknowledges torture, now he must be accountable

Quigonbond: Former Operasi Lalang detainee Kua Kia Soong has called for Mahathir to be held accountable for the torture inflicted upon detainees.

We know the ISA was bad. The civil society, the Malaysian Bar, and ordinary Malaysians were frustrated by it because it is dictatorial to allow detention without trial. It is a menace to society, and possibly the single factor that kept Mahathir in power.

However, most Malaysians want now is to focus on the present to save our future.

Now, we have the Security Offences (Special Measures) Act 2012 (Sosma). We have the Prevention of Crime Act 1953. We have ridiculous provisions in the Penal Code about offences against democracy.

We still have the Sedition Act 1948, and we have the Official Secrets Act 1972. And we have the National Security Council Act 2016, which together with a compliant Federal Court and inspector-general of police can only mean that no matter how badly the 14th general election is going to turn out for BN, they can "legally" stay in power.

I hope Kua will train his passion towards these pressing issues instead of fighting for a mere acknowledgement of wrongdoing done to him in the past.

FellowMalaysian: Accepting blame and expressing regret without expressing remorse and contrition falls short of an apology and accountability.

Such crimes involve heinous and despicable tortures, whether mental or physical or both. Mahathir's recent reply to the atrocities and his claim that he had just come to know “torture had happened'” shows that he will lie profusely in order to protect his own skin.

The least he could do now is to offer atonement, deep regret and ask for forgiveness from the ISA victims for allowing the torture to happen under his watchful eyes.

Hopelessly: In the Star Trek movie "The Undiscovered Country", Captain James T Kirk accepted the responsibility for the criminal activities of his crew members, and was found guilty by the Klingon court.

There seems to be a striking resemblance here. Dr M might be guilty, but this needs to be proven in a court of law, however painful it may be.

We are, after all, a democratic nation which abides by the rule of law.