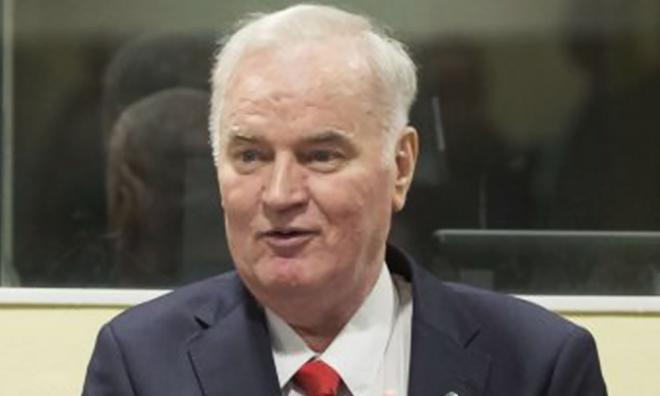 'Butcher of Bosnia' Mladic sentenced to life in prison for genocide

A UN tribunal on Wednesday convicted ex-Bosnian Serb military commander Ratko Mladic of genocide and crimes against humanity for massacres of Bosnian Muslims and ethnic cleansing campaigns to forge a “Greater Serbia”, and jailed him for life.

Mladic was hustled out of the court minutes before the verdict for angrily shouting, “This is all lies, you are all liars!” The outburst occurred after Mladic returned to the courtroom from what his lawyers described as a visit to the bathroom, then a blood pressure test which held up proceedings.

The UN Criminal Tribunal for the Former Yugoslavia (ICTY) found Mladic guilty of 10 of 11 charges, including the slaughter of 8,000 Muslim men and boys at Srebrenica and the 43-month siege of the Bosnian capital Sarajevo, in which more than 10,000 civilians were killed by shelling, mortar and sniper fire.

The killings in Srebrenica of men and boys after they were separated from women and taken away in buses or marched off to be shot amounted to Europe’s worst atrocity since World War Two. 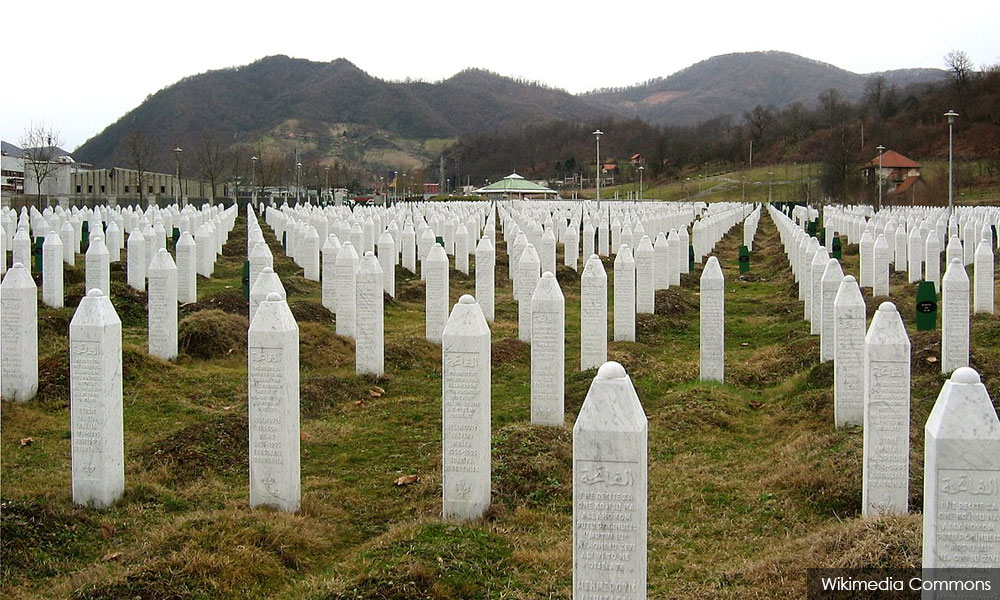 “The crimes committed rank among the most heinous known to humankind, and include genocide and extermination as a crime against humanity,” presiding Judge Alphons Orie said in reading out a summary of the judgment.

“Many of these men and boys were cursed, insulted, threatened, forced to sing Serb songs and beaten while awaiting their execution,” he said.

Mladic had pleaded not guilty to all charges. His legal team said he would appeal against the verdict.

Called the “Butcher of Bosnia” by survivors of his actions, Mladic was the most notorious of 163 ICTY indictees together with Radovan Karadzic, the former Bosnian Serb nationalist leader and political mastermind of ethnic cleansing, and their patron, then-Serbian President Slobodan Milosevic.

The tribunal found Mladic “significantly contributed” to genocide committed in Srebrenica with the goal of destroying its Muslim population, “personally directed” the bombardment of Sarajevo and was part of a “joint criminal enterprise” aimed at purging Bosnian Muslims and Catholic Croats from Bosnia.

Prosecutors said the ultimate agenda of Mladic, Karadzic and Milosevic was what came to be known worldwide as ethnic cleansing, to carve out an Orthodox “Greater Serbia” in the ashes of multinational federal Yugoslavia.

ICTY chief prosecutor Serge Brammertz called the verdict “a milestone” in holding Mladic accountable not just for massacres but the detention of tens of thousands of non-Serbs in camps where many were beaten and raped, and the forced displacement of over one million to remake Bosnia’s demographic map. 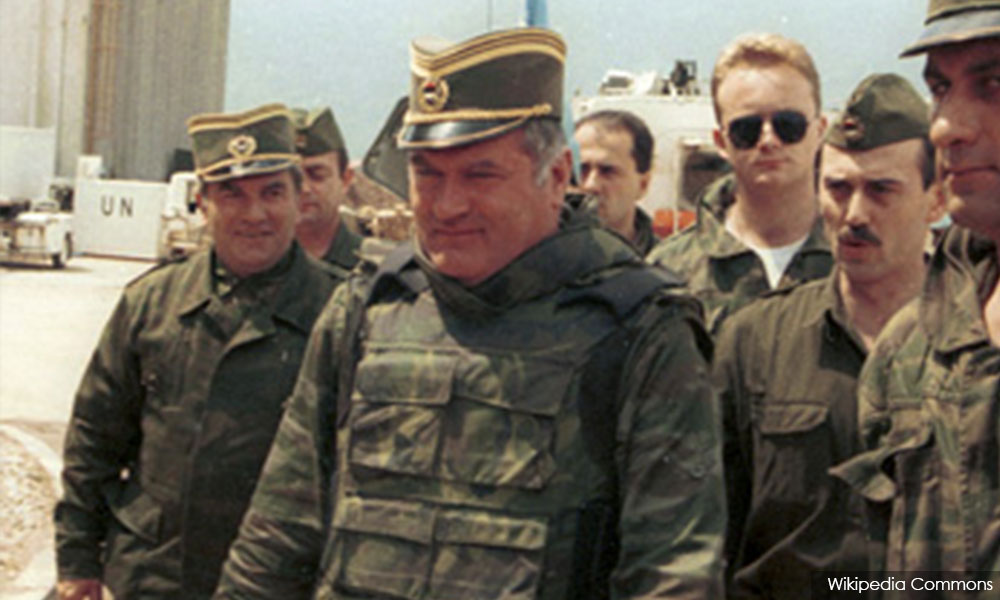 The Mladic case is the last major decision by the ICTY, which plans to close its doors soon after sentencing 83 Balkan war criminals since opening in 1993.

In Geneva, UN human rights chief Zeid Ra‘ad al-Hussein called Mladic the “epitome of evil” and said his conviction after 16 years as an indicted fugitive and five years of trial was a “momentous victory for justice”.

“Today’s verdict is a warning to the perpetrators of such crimes that they will not escape justice, no matter how powerful they may be nor how long it may take,” Zeid said in a statement.

'Respect the victims, look to the future'

President Aleksandar Vucic of Serbia, whose 1990s strongman leader Milosevic died in a tribunal prison in 2006 before the end of his genocide trial, said Serbia “respects the victims”.

“I would like to call on everyone (in the region) to start looking into the future and not to drown in tears of the past... We need to look to the future...so we finally have a stable country,” Vucic told reporters when asked about the verdict.

Serbia, once the most powerful Yugoslav republic, is now democratic and seeking ties to the European Union.

Bosnian Prime Minister Denis Zvizdic said he hoped that “those who still call for new divisions and conflicts will carefully read the verdict rendered today...in case that they are still not ready to face their past”.

He was alluding to enduring separatism in post-war federal Bosnia’s autonomous Serb region.

Srebrenica, near Bosnia’s eastern border with Serbia, had been designated a “safe area” by the United Nations and was defended by lightly armed UN peacekeepers. But they quickly surrendered when Mladic’s forces stormed it on July 11, 1995.

A bronzed and beefy Mladic was filmed visiting a refugee camp in Srebrenica on July 12. “He was giving away chocolate and sweets to the children while the cameras were rolling, telling us nothing will happen and that we have no reason to be afraid,” recalled Munira Subasic of the Mothers of Srebrenica group.

Serbian TV footage showed Mladic approaching a blond boy in a friendly way and asking him his name and how old he was, then turning to fearful Muslim women and children and assuring them: “All who would like to stay can stay. Just take it easy.”

Subasic said; “After the cameras left he gave an order to kill whoever could be killed, rape whoever could be raped and finally he ordered us all to be banished and chased out of Srebrenica, so he could make an ‘ethnically clean’ town.”

Dutch peacekeepers looked on helplessly as Bosnian Serb officers separated men and boys from women, then sent them out of sight on buses or marched them away to be shot.

The remains of Subasic’s son and husband were both found in mass graves by International Commission of Missing Persons (ICMP) workers. The ICMP have identified some 6,900 remains of Srebrenica victims through DNA analysis.

The siege of Sarajevo terrorised its people. It involved both heavy shelling that sometimes slaughtered residents queueing outside for scarce supplies, and random sniper fire that picked off people who dared to venture into the streets, or even as they stood indoors by exposed windows.

In May 1992, as artillery barrages from surrounding hillsides were setting Sarajevo ablaze, Bosnian intelligence intercepted a Mladic phone call in which he was giving orders about targets; “Fire on the parliament, presidency, the Old Town. Fire so that they cannot sleep, burn their brains!”

That phone call was entered as evidence in his trial.

Mladic is still seen as a national hero by some compatriots for the swift capture of much of Bosnia after its Serbs rose up against an early 1992 referendum vote by Muslims and Croats for independence from Serbian-dominated Yugoslavia.

His lawyers will argue in their appeal that Bosnian Serbs were “victims” of the referendum and fought in “self-defence”.

Mladic’s lawyers contended that Sarajevo was a legitimate military target as it was the main bastion of Muslim-led Bosnian government forces. They also asserted that Mladic left Srebrenica shortly before Serb fighters began executing Muslim detainees and was later shocked to find out they had occurred.

But Wednesday’s verdict was never much in doubt, given the mountain of evidence of Serb atrocities produced at previous trials. Four of Mladic’s subordinates received life sentences.

Karadzic, 72, was convicted of genocide in 2016 and sentenced to 40 years. He is appealing.

Mladic was indicted along with Karadzic in 1995, shortly after the Srebrenica killings. But he evaded capture until 2011, three years after a heavily disguised Karadzic was arrested.

Mladic’s trial in The Hague took five years in part because of delays due to his poor health. He has suffered several strokes, but the ICTY rejected a flurry of last-minute attempts by his lawyers to put off the verdict on medical grounds.

The ICTY indicted 161 people in all from Bosnia, Croatia, Serbia, Montenegro and Kosovo. Of the 83 convicted, more than 60 of them were ethnic Serbs.