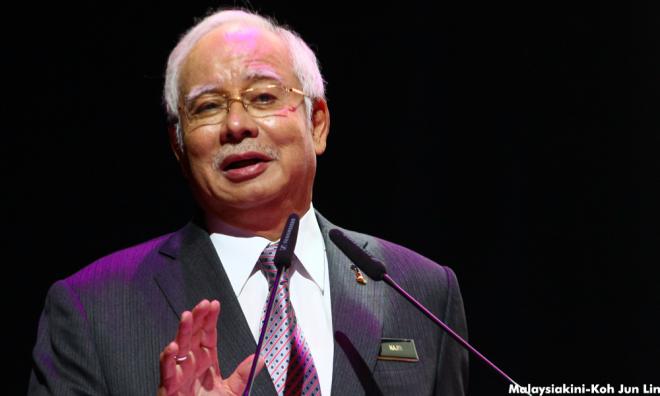 Bernama report on me implicated in Morais murder is 'mischievous' - Najib

Najib Abdul Razak has termed a Bernama report, in which an accused in the murder of deputy public prosecutor Kevin Morais claimed to have been offered RM3.5 million from the former premier to plead guilty to the crime, as "mischievous."

Najib said Bernama had used a sensational and tabloidish headline for the report, and that those too lazy to read the article would automatically fall for it.

"Those who are not easily trapped by just reading headlines will surely find something amiss after reading the full article.

"There are seven accused in the murder.

"Only one of those accused suddenly claimed I offered him RM3.5 million through an unnamed Prisons Department officer to admit guilt in the Morais murder," he said in a statement today.

Najib pointed out that the accused, S Ravi Chandaran, had previously also claimed to have been offered money to admit guilt in the murder by from Morais' younger brother Richard, as well as another of the accused, military pathologist Dr R Kunaseegaran.

"The accused's attempt to implicate me are clearly ludicrous," he stressed.

The accused said this while being cross-examined by Kunaseegaran's lawyer N Sivananthan.

According to Najib, this is not the first time his name has been linked to the Morais murder, pointing to Sarawak Report's allegations that the slain deputy public prosecutor was preparing draft charges against him.

As he noted, however, MACC chief Shukri Abdull had already denied Morais' involvement in any of the commission's 1MDB-linked investigations.

Morais was murdered in September 2015.

He was reported missing on Sept 4 and his remains were found stuffed into a concrete-filled drum two weeks later, on Sept 16.

Besides Kunaseegaran and Ravi Chandaran, R Dinishwaran, AK Thinesh Kumar, M Vishwanath and S Nimalan have all pleaded not guilty to the murder of Morais.

All are charged under Section 302 read together with Section 34 of the Penal Code, which carries the mandatory death sentence upon conviction.