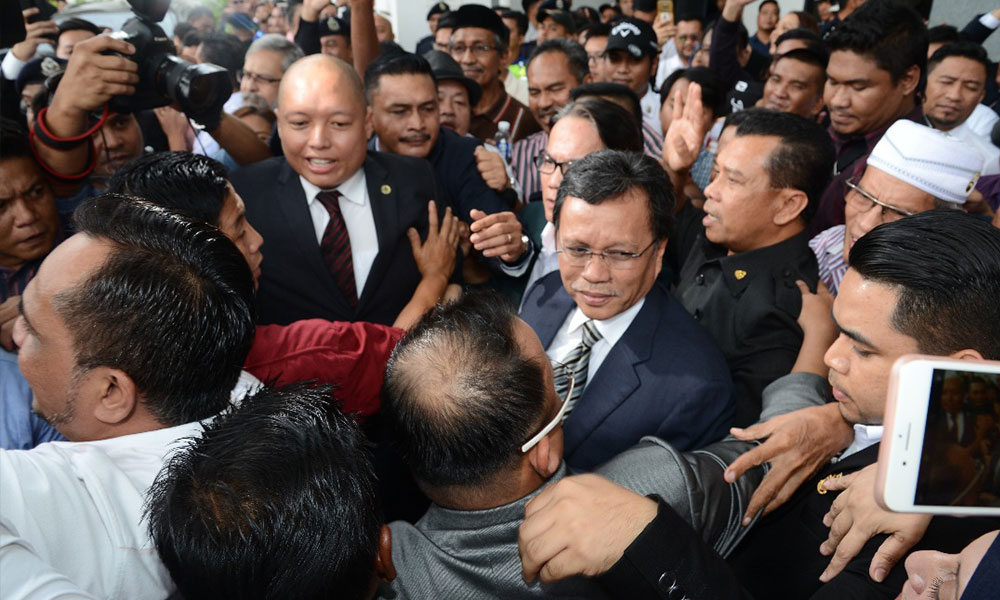 Warisan party president Shafie Apdal is to remain as the Sabah chief minister after the Kota Kinabalu High Court ruled in his favour today.

The court in its ruling had set aside former chief minister Musa Aman's suit against Yang di-Pertua Negeri Juhar Mahiruddin and Shafie, in which Musa had challenged the latter's appointment on May 12.

According to The Borneo Post, the court also ordered Musa to pay RM15,000 in costs each to Juhar and Shafie.

It was reported that Musa had, in June, filed a suit to seek a declaration that he was the rightful Sabah chief minister as appointed by Juhar on May 10.

Musa, who was then the Sabah BN chairperson, was initially sworn-in as the chief minister on May 10 by Juhar after securing a simple majority in the 14th general election.

However, he lost the majority when several assemblypersons from his party (Umno) and Upko (a BN component party) jumped ship to give their support to Warisan, resulting in the swearing-in of Shafie on May 12.

Following this, Musa filed a writ of summons on May 17 seeking a declaration that he remains the lawful Sabah chief minister.

However, on June 6, he filed a substitute summons supported by an affidavit where he named Juhar and Shafie as the first and second respondents, respectively.

Missing in action due to medical reasons

After the swearing-in of Shafie, numerous media reports had stated that Musa was uncontactable and believed to have left the country on May 14.

On May 24, it was reported that Sabah police said that they did not know Musa's whereabouts, and were seeking his cooperation in relation to their investigation into complaints that Musa had intimidated Juhar.

Inspector-general of police Mohamad Fuzi Harun on June 7 told the media that police believed that Musa had snuck out of the country after the Immigration Department revealed that it had no record of him leaving Malaysia.

Musa broke his silence later that month, saying that he was in the UK for medical and personal reasons. Denying that he had snuck out of Malaysia, Musa in a statement then said that he had left the country “perfectly lawfully” on May 16.

He finally returned to Malaysia on Aug 21 and was sworn in as the Sungai Sibuga assemblyperson on Sept 5.

For all the charges, Musa, 67, was accused of soliciting bribes from eight timber concession company owners when he was Sabah chief minister and chairperson of the Sabah Foundation board of trustees.

The offences were listed as having been committed in eight financial institutions in Hong Kong and Singapore between December 2004 and November 2008.

He pleaded not guilty to all the charges.