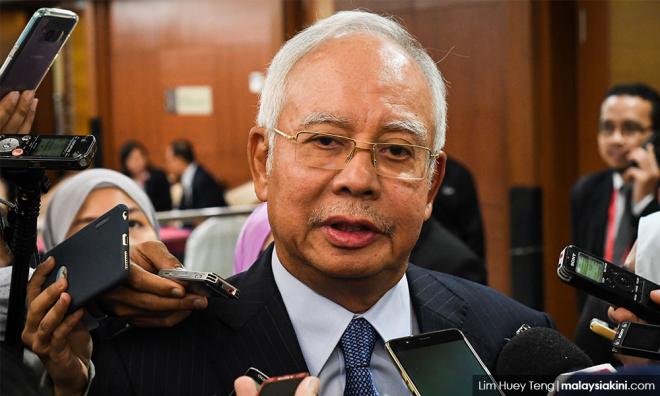 Najib: Leadership not entirely to blame for Umno desertions

Najib Abdul Razak has come to the defence of the Umno leadership, stating the latter is not entirely to blame following the recent flight of lawmakers and other members from the party.

Saying he was "disappointed" with the exodus, which has to date seen 11 MPs and scores of assemblypersons and others leave the party since the 14th general election, the former Umno president said the party was undergoing a "natural cleansing".

"Some of them (who have left Umno) were greatly helped by myself and Umno grassroots, especially in their political careers [...] because we believed that no matter what happened, they would continue to captain the ship and lead the Umno grassroots.

"Of course, I am disappointed. But what can we do if the struggles of Umno are no longer in their hearts and minds.

"Is it the truth that what is being chased is merely positions and allocations?

"[...]To me, it is not fair that the Umno leadership today is blamed for everything," Najib said in a Facebook post today.

The former prime minister added that the party, which had held federal power for over six decades before being overthrown by Pakatan Harapan in the recent national polls, was never dictatorial but encouraged members to voice out their opinion.

He said that despite the party now finding itself the opposition, members could still voice their views on government policies.

Najib, who is also Pekan MP, further appealed to its members not to be hasty in deciding their respective political paths.

"We have still been given the people's trust to look after their interests.

"Give the people the confidence that we can (do so) and are capable, that we truly rise for the people.

"Umno lives not because of one or two people."

His post comes after the current party leadership, under the helm of president Ahmad Zahid Hamidi, is facing criticism for failing to prevent the mass exit from the party.

Their departure was preceded by the exit of four MPs from Sabah Umno and scores of assemblypersons last Wednesday.

Umno is now left with just 38 seats in Parliament from the 54 it won in GE14.

This had led to numerous calls for Zahid's resignation and with former Umno Youth chief Khairy Jamaluddin calling for immediate party polls, seconding calls for a new leadership to be elected.