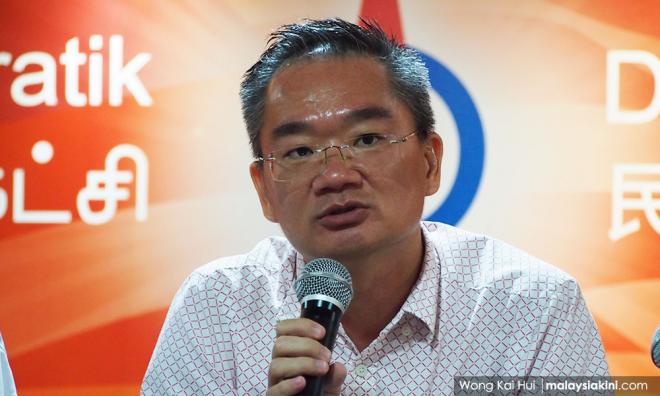 “The decision to quit the party (Umno) is well within their rights, but I strongly reject any suggestion for Rahim Thamby Chik and his followers to join any of the parties in the Pakatan Harapan coalition in Malacca.

"I urge all Bersatu to strongly reject any membership application by Rahim Thamby Chik or his followers or else, the acceptance of Rahim Thamby Chik will damage the integrity of the state government and weaken the people’s confidence for Malacca Pakatan Harapan," Khoo said in a statement today.

Earlier today, Rahim, who served as the state's sixth chief minister for 12 years, submitted his application to join Bersatu to Malacca Bersatu chief Redzuan Yusof, along with some 100 former Umno members.

Khoo pointed out that Rahim was part of the 'Datuk Trio' group who screened a sex video to journalists in 2011.

Khoo added that Rahim was investigated for statutory rape of a minor in 1994. The case was later dropped due to a lack of evidence.

Finance Minister Lim Guan Eng, the Kota Malacca MP at the time, had criticised the then-government for not acting against Rahim.

Khoo then urged the Harapan presidential council to discuss the issue of party-hopping and make a stern decision to stop this from continuing.

“The acceptance of former Umno leaders and members in Harapan is a betrayal against the people and Harapan members who have struggled against the BN regime for many years,” he said.

He also insisted steps be taken to reform existing laws to prevent “unethical party-hopping”, as he said it has threatened the democratic processes in the country.

Bersatu president Muhyiddin Yassin has earlier addressed the “bad history” between Rahim and Anwar and Lim, saying it was in the past.

He said the current situation needed to be looked at through a new political perspective.

However, Muhyiddin stressed that Rahim must undergo a vetting process like any other leader applying to join the party.

Muhyiddin had also addressed calls for Harapan to convene a presidential council meeting to discuss the defections.

He pointed out that this had already been discussed repeatedly in the past but it had come up again due to the recent Umno exodus.