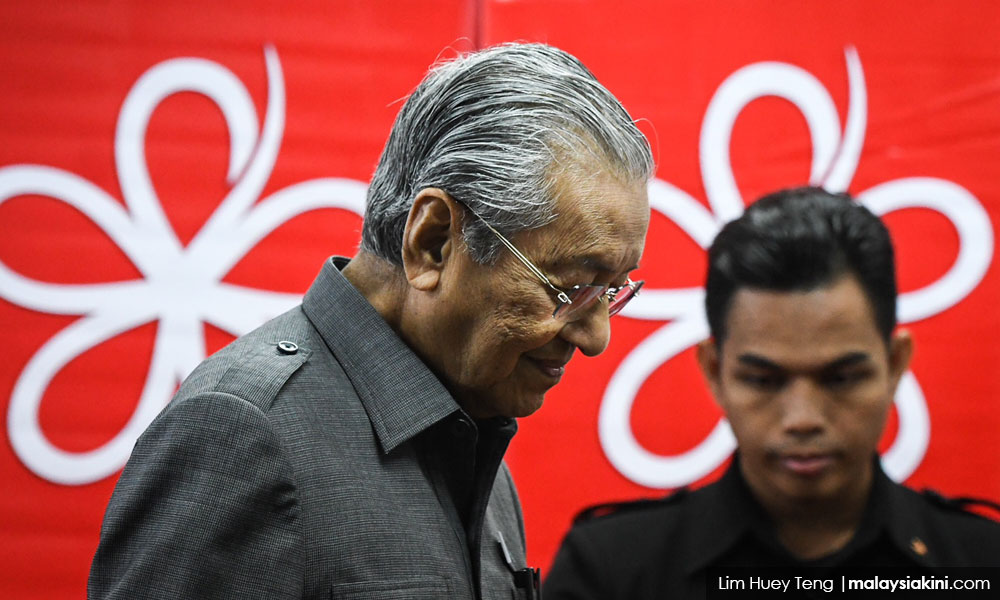 Will this be Mahathir’s finest moment?

COMMENT | I refer to Rais Hussin's article "Mahathir's resignation is not an option" which is a response to my own “Mahathir must step down to save Reformasi.”

Reviewing the above two articles, I would contend that the issues at hand are: The potentially devastating impact on Pakatan Harapan arising from the anticipated mass migration of defecting Umno MPs to Bersatu, and whether Prime Minister Dr Mahathir Mohamad should step down at this juncture.

What motivates Umno MPs to defect in the first place?

Considering that the intention to defect occurred so soon after losing the election, the probability of this being motivated by a drastic change of political ideology is almost nil.

Such speedy decisions to switch camp from the opposition to the ruling coalition are invariably prompted by the desire to seek greener pastures, as well as to escape criminal investigation and prosecution, as almost all of them have been tainted by corruption during the corrupt rule of Umno and Najib Abdul Razak. They are pure opportunists, and many are intended escapees from the law.

Their massive influx would reflect the complete lack of integrity and principles of Harapan in general and Bersatu in particular.

Fatally for Harapan, it will be taken as a grand sell-out of the electorate, who had voted Harapan to power precisely because they had been repulsed by the despicable Umno leadership.

And whatever Bersatu may say, it can not remove the widespread perception that it is implicated in such mass movement of defectors.

Former minister Hamzah Zainuddin's declaration of 36 Umno MPs having signed a pledge of loyalty to Mahathir is the latest incident, among many others, that has given fuel to such perception.

Mahathir as a reformist PM

What is the root cause of Umno’s decadence, which subsequently leads to its almost instant virtual collapse?

Answer: racism and corruption. The former breeds the latter, in addition to fracturing the country along racial lines, breeding mediocrity and brain drain which have caused our prolonged economic malaise – all under Umno’s hegemonic rule.

The Reformasi movement founded by Anwar Ibrahim in 1998 was precisely intended to overcome all these vices, which includes wiping out corruption, restoring justice and equality, reforming the tattered institutions and restoring the rule of law, thereby putting the country on the path of healthy national integration and robust economic growth.

The Harapan coalition has therefore an enormous task at hand. In addition to reforming the broken institutions, the impaired governance and restoring the rule of law, it must at the same time tackle racism which is the mother of these evils.

Among these urgent tasks, institutional reforms and reform of biased mindsets on race and religion of the majority of our populace are basic, the success of which should serve as a solid foundation upon which 'New Malaysia' will thrive.

It goes without saying that to successfully implement such a heavily reform-loaded agenda, the leader must be a reformist of deep conviction of such reforms.

In this respect, Mahathir’s background would make him ill-fitted as leader of this reformist coalition, considering the fact that most of his current task would involve dismantling or reforming or rebuilding the governance infrastructures which he built during his long reign as Umno president and prime minister.

And this is reflected in his delay or refusal to repeal many repressive laws, to abolish racist institutions, to reveal comprehensive recommendations for institutional reforms.

It is also reflected in his lack of enthusiasm to reform the biased mindset on race and religion, and the lack of action to gradually and strategically phase out pervasive racial discriminations and reintroducing meritocracy in education, state-controlled enterprises and public service.

While it is unfair to demand full performance on such reform agenda from Mahathir, in view of his political background, the same cannot be said of Anwar, founder and leader of the Reformasi movement and successor-designate to Mahathir.

Anwar would be a shoo-in for this task. Apart from being the architect of the reform concepts of this movement, he was also instrumental in formulating the election manifestos for the 12th and 13th general elections, which later served as a blueprint for the manifesto which helped Harapan to win a sweeping victory in the 14th general election.

Anwar has built up the movement from cradle to its present maturity, for which he has endured incomparable sufferings and political persecution almost continuously throughout the past two decades of struggles.

He is not only the most knowledgeable person on such reforms, but he also has the grit, guts and gumption to see the reforms through to their fruition.

Mahathir is a politician extraordinaire. He is unique in modern history. After autocratically ruling the country for 22 years, he returned to the political scene many years later to lead a reformist coalition and succeeded in overthrowing the decadent regime which had ruled uninterrupted since independence 61 years ago and crowned himself prime minister at the incredible age of 93.

He has made many mistakes in the past, but he has also made the greatest contribution to the country – dethroning the almost unbeatable, corrupted-to-the core autocracy, thus giving the nation a new breath of life.

However, his greatest challenge is yet to come.

At this moment, when the mass of Umno defectors are at his doorstep ready to boost up his relatively small party, will he embrace them to strengthen his hand to rule to his heart’s content?

Or will he have the wisdom at this final hour to recognise the sacrosanct call of history – relinquish power now, and let his reformist successor lead the next leg of the nation’s journey?

The former choice would almost certainly cause the coalition to lose credibility with its supporting electorate and cause dissension within the coalition and demoralise the entire reform movement.

While the latter choice would give a fresh impetus to the current reform agenda that would enable the nation to scale new heights and make this his crowning moment that would seal his status as founder of the 'New Malaysia'.

Whatever Mahathir decides, it may mark another turning point for the country.

KIM QUEK is the author of the banned book The March to Putrajaya, and bestseller Where to, Malaysia?