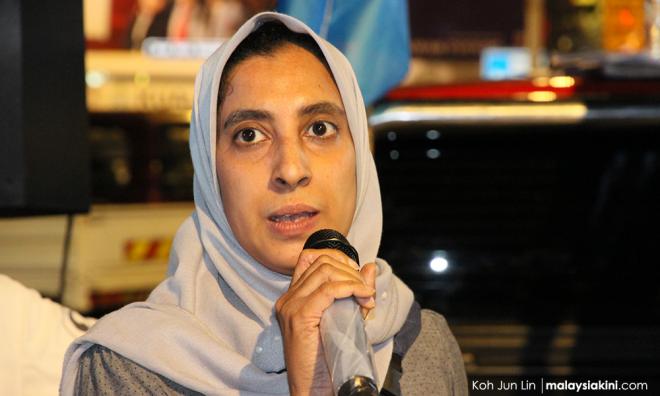 Latheefa Koya has chided the appointments of PKR state chiefs as being in favour of one of the two main factions in the party.

Such appointments, which the PKR member likened to cronyism, are "disturbing and a cause for grave concern."

"Except for Sarawak and Selangor, the state chiefs who have been appointed are known to be aligned to one of the two main factions in PKR.

"Why the heavy imbalance favouring one faction? Appointments favouring one particular faction are tantamount to cronyism, which is anathema to any reform party," the Lawyers for Liberty executive director said in a statement today.

The factions Latheefa referred to are those of deputy president Mohamed Azmin Ali and former vice-president Rafizi Ramli.

In Pahang and Sabah, the chosen candidates did not even hold majority support among state division chiefs, she added.

"However, after being summoned to meet the president (Anwar Ibrahim), the division chiefs changed their support.

"Why did they shift support to the opposition faction after meeting the president? What did he say to them?"

Latheefa further claimed that in three other states – Johor, Negeri Sembilan, and Selangor – the president went on to choose candidates aligned to one faction despite the majority of division chiefs supporting different candidates.

"I have copies of written memoranda of the state division chiefs supporting candidates who were inexplicably not appointed.

"While the president is given the power to choose the respective state chief in consultation with the division chiefs, it is highly unusual and contrary to the spirit of the party constitution for the president to ignore the majority preference.

"In a reformist and democratic organisation, the party president cannot simply brush aside majority opinion."

"The appointment of Nurul Izzah as Penang state chief by the party president, who is her father, is highly inappropriate and open to the charge of nepotism.

"Needless to say that the practice of appointing close relatives to important positions should have no place in a reformist party."

According to Latheefa, the newly appointed Kelantan state chief was also a Tanah Merah Umno member as recently as September, and is currently under suspension over money politics allegations.

"PKR needs to realise that it is now part of the federal government, charged with no less a task than instituting reforms and properly governing the nation. Hence, it must uphold the highest and best democratic practices.

"After a scandal-ridden and disgraceful party election process, these appointments only further erode public regard and confidence in PKR.

“PKR cannot preach democracy to the country while continuing to run the party on the basis of coteries or factions, and ignoring basic democratic norms," Latheefa said, adding that it is incumbent on party leaders to explain the "dubious and disturbing" appointments to the public.

In a series of tweets, the Setiawangsa MP asked Latheefa to refer to the party's constitution and to judge fairly.

"The selections are over. The deputy president's team won a lot of positions. Move on.

"The choosing of state chiefs falls under the president's power, after discussions with division chiefs," he said.

"Nurul Izzah is a three-term, popular vice-president, an MP and the Permatang Pauh division chief. She is cabinet material, (and) deserves to be judged on her own merit,

"Next round, maybe Latheefa can contest for the presidency and appoint state chiefs of her choice."