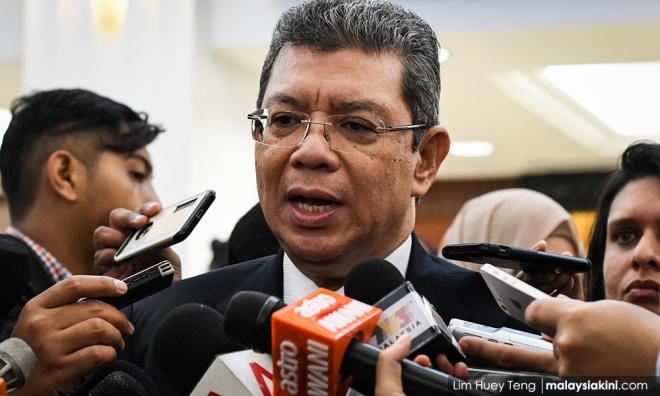 PAS president Abdul Hadi Awang has so far refused to accept the fact that Malays make up the current majority of local councillors, according to Foreign Affairs Minister Saifuddin Abdullah.

Taking to Twitter, Saifuddin was responding to comments on Hadi's reported remarks in London, that local elections must be inclusive so that cities are not dominated by just one race.

"The fact is Malays are the majority in most local councils. But he (Hadi) didn't want to believe it," said Saifuddin to a question on how would the local government results differ from the normal general elections in terms of ethnicity as Malays remained to be the majority population.

"We have to rebut him," the Indera Mahkota MP said to another comment on how Hadi was merely spreading disinformation in arguing against the call to reinstate local government elections.

On Christmas Eve, tempers flared at a dialogue session with Hadi in London, when an audience member asked why the former was being "racist" and against local council elections.

Hadi had warned about a possible repeat of the May 13 race riots if only one race was in power and this had incensed the audience member who first questioned him.

The man then responded by verbally abusing Hadi, claiming the latter's following of the Al Quran had caused his mind to be "stuck in 1969."

Faced with a barrage of expletives, Hadi (photo) reiterated his belief that local council elections must be inclusive, so that no one race controls the cities, as this can cause tension.

Meanwhile, DAP stalwart Lim Kit Siang said he was taken aback by Hadi's latest remark against local council elections as the same arguments on alleged dominance of one race had been countered since three years ago.

"In fact, the argument that the restoration of local council elections would benefit the Chinese at the expense of the Malays is even more untenable today," stressed the Iskandar Puteri MP.

"In the 2020 Census to be held in about a year’s time, there would be further changes in the racial composition of the demography of the local authorities in favour of the Malays, because of the higher birth rates among the Malays compared to the non-Malays," Lim further argued.

"Will the Hadi PAS leadership stop looking at local government elections from the lens of toxic and vicious politics of lies, hatred, fear, race and religion and from the point of view of local government democracy?

"Or are the thinking of the Hadi PAS leadership so fixed and frozen that they are immune to arguments, facts and truth as illustrated by PAS’ continued opposition to local government elections...," he said.

However, Zuraida said she would continue to push for local elections and will take into account local factors.