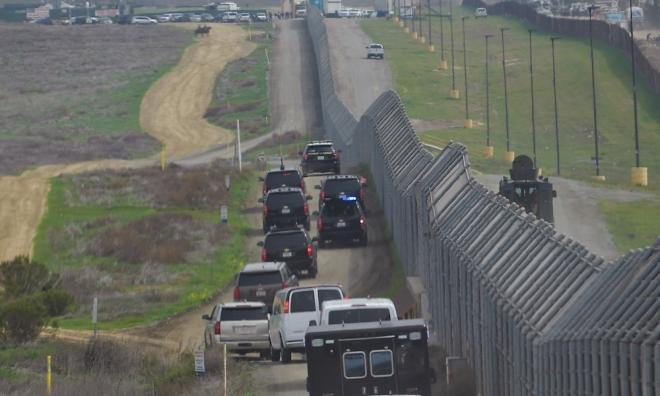 US President Donald Trump pledged on Sunday not to bend in his demand for a wall along the southern border with Mexico but said the barrier could be made of steel instead of concrete as a potential compromise with Democrats who refuse to fund it.

Trump's comments came at the start of the third week of a partial government shutdown resulting from the dispute that has left hundreds of thousands of federal workers idled or without paycheques.

Trump threatened again, without providing specifics on where the funding would originate, to declare a national emergency as an alternative way to build the wall, depending on the outcome of talks in the coming days.

Democrats have declined to approve the US$5.6 billion (RM23 billion) Trump wants to fulfil a 2016 campaign promise to curb illegal immigration. Led by new speaker Nancy Pelosi, Democrats passed a bill in the House of Representatives last week to reopen the government without wall funding. Pelosi has called a border wall immoral.

"This is a very important battle to win from the standpoint of safety, number one, (and) defining our country and who we are," Trump told reporters at the White House before leaving for a short trip to the Camp David presidential retreat.

"The barrier, or the wall, can be of steel instead of concrete, if that helps people. It may be better," he said.

The White House painted that offer, which Trump floated previously, as an olive branch.

Mick Mulvaney, Trump's acting chief of staff, told NBC's 'Meet the Press' that agreeing to a steel barrier would allow Democrats to stick to their refusal to fund a wall.

"That should help us move in the right direction," he said.

House Majority Leader Steny Hoyer did not show his hand when asked whether the White House offer to move away from a concrete structure was evidence of compromise.

"It'll be discussed," he said on NBC.

Vice-President Mike Pence led a second round of talks with congressional aides on Sunday about the issue, but Trump said he did not expect those talks to produce results, noting that the principals - himself, Pelosi and Senate Democratic leader Chuck Schumer - were the ones who could solve it quickly.

"If we don't find a solution, it's going to go on for a long time. There's not going to be any bend right here," Trump said.

He later tweeted that the Pence talks were productive. But a Democratic aide familiar with the meeting said Democrats urged the White House to pass measures to reopen the government without wall funding and Pence said Trump would not do that.

The aide said no progress was made and no further meetings of the group were scheduled.

Democrats could demand other concessions from the White House, such as protections for immigrants brought illegally to the United States as children, known as Dreamers, or changes to other spending provisions. Trump said he wanted to help on the Dreamer issue but preferred to wait for a Supreme Court ruling on it first.

Democratic US Senator Dick Durbin reacted coolly to Trump's suggestion of declaring a national emergency. "I don't know what he's basing this on, but he's faced so many lawsuits when he ignores the law and ignores tradition and precedent," Durbin said on CBS' 'Face the Nation'.

Large chunks of the federal government were shut down on Dec 22 after lawmakers and the president hit an impasse over Trump's demand that a bill to keep the federal government operational include money to help build a US$23 billion (RM95 billion) wall along the US border with Mexico. About 800,000 government workers are either furloughed or working without pay.

"I can relate," Trump, a former New York businessman, said when asked if he could relate to the pain of federal workers struggling to pay their bills. "I'm sure that the people that are on the receiving end will make adjustments." Asked if workers would get paid on Friday, Trump said: "We'll see whether or not it's settled."

Not all Republicans agree with Trump's insistence on keeping government agencies shuttered until the border debate is resolved.

"It is not a sign of weakness to try to figure out a middle ground, and I think that both sides need to indicate a willingness to listen and to compromise,” US Senator Susan Collins of Maine said on NBC. She called the debate over using steel versus concrete "bizarre".

House Democrats plan to pass a series of bills this week to reopen government, breaking up legislation they have already approved in a bid to get Republicans to agree to reopen certain agencies, Hoyer said on 'Meet the Press'.

"We need to open up government and then negotiate. Not the other way around," he said.