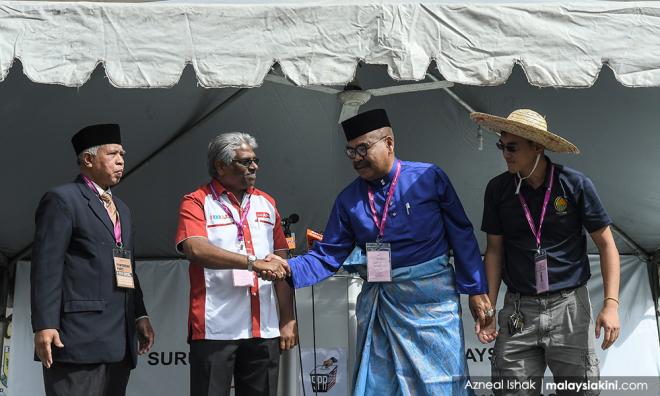 MP SPEAKS | The Barisan Nasional candidate for the Cameron Highlands by-election, Ramli Mohd Nor, said yesterday that if he wins the by-election, it will not be based on bribery.

This is a most welcome statement by the BN candidate and I applaud him for it, for there is a very deliberate and systematic attempt to divert attention as to why the election of MIC vice-president C Sivarraajh as Cameron Highlands MP in the 14th general election on May 9, was declared null and void; resulting in the holding of this by-election.

And in particular, the significant role of the Jelai assemblyperson and Pahang Menteri Besar and Wan Rosdy Wan Ismail in the money-politics, vote-buying and corrupt election practices during the last general election, which were highlighted in the election court appeal - which Wan Rosdy dared not become a witness to rebut, although the election court proceedings were adjourned three times for him to testify.

Actually, the money politics, vote-buying and corrupt election practices in the 14th general election were not confined to Cameron Highlands, but were fairly routine for most BN election campaigns.

The difference was that Cameron Highlands produced 12 “integrity heroes” – 11 of them Orang Asli – who were prepared to testify in open court about such practices by BN in Cameron Highlands during the last general election.

It is indeed a marvel that Pakatan Harapan and Warisan could win the 14th general election and form the federal government led by Dr Mahathir Mohamad, despite BN's money-politics, vote-buying and corrupt election practices.

In actual fact, if there had been clean and fair elections in every constituency in the last general election, BN would not have even won the 79 parliamentary seats with 54 secured by Umno (now reduced to a paltry 37).

The attempt to divert attention from the reason behind the Cameron Highlands by-election has led to them accusing the DAP and Harapan of being involved in vote-buying, with BN leaders trying to take the high moral ground and spreading on social media a batch of images showing money being handed out to people wearing Pakatan Harapan Cameron Highlands T-shirts.

Police reports were even lodged by BN leaders on this matter.

In actual fact, these were honest and legitimate election expenditures, as they were reimbursement of RM20 each for some 60 Orang Asli volunteer motorcyclists who came out from remote Orang Asli villages, especially from the Jelai area, to Tanah Rata on Saturday, which was nomination day.

Is Ramli prepared to reveal publicly how much money BN spent on nomination day?

I have no doubt that what DAP and Harapan spent on nomination day was a pittance compared to what BN spent last Saturday.

This takes us to the second prong of the BN campaign to divert attention from the significant role of Wan Rosdy in the money-politics, vote-buying and corrupt election practices in Cameron Highlands during the last general election, resulting in it being declared null and void.

All those who are interested in this issue should read the judgment of the Election Court judge, Justice Azizah Nawai, in the High Court in Kuala Lumpur on Nov 30.

If Ramli has difficulty in getting a copy of the judgment, I can quickly furnish him a copy.

In Paragraphs 26 to 33 of the judgment on Sivaraajh and Wan Rosdy arriving at SK Sinderut in Pos Sinderut by a helicopter about 2pm on April 30, 2018,  the tok batin (village chiefs) were told to the effect that, “the tok batin must remember who were the leaders… and they must therefore vote for BN” and the batin present were given RM200 each as “money for cigarettes”. Justice Azizah said the fact that RM200 was given to the batin present had been proven.

From Paragraphs 34 to 41, on Sivarraajh and Wan Rosdy using a helicopter to visit Pos Lenjang on May 6, 2018, the judge found that “on the factual matrix” of the case, the batin were given RM25,000 to be distributed to all voters in their respective villages, and each batin received RM200.

From Paragraphs 45 to 48, the election judge was satisfied that later on the same day, Sivarraajh and Wan Rosdy met seven batin in Kampung Tual, Janggap, Regang, Sinderut, Cempian, Kabang and Belau and the batin were given RM300 each.

There were other allegations of the batin being paid large sums of money to be distributed to Orang Asli villagers to buy their votes for BN.

Wan Rosdy (photo, below) is very lucky that his election as Jelai assemblyperson has not been challenged in the election court, or it would also be declared null and void, disqualifying him from contesting in the Jelai by-election and would result in him losing his position as Pahang menteri besar.

Therefore, he is a tainted menteri besar and should not be involved in any manner in the Cameron Highlands by-election because of his violation of the election laws in GE14.

Will Ramli attend a special function to honour these Orang Asli witnesses in the Cameron Highlands election appeal – who have shown by deed that they are honourable and worthwhile Malaysians, who are not just local champions but national heroes?

I dare say that if there is no money politics, vote-buying and corrupt election practices, Harapan stands a very good chance of winning the Cameron Highlands by-election.

Dare to take up the challenge?

This is why I welcome Ramli’s statement and invite him to make the Cameron Highlands by-election the model for all general elections and by-elections in future, whereby the candidates subject themselves to daily scrutiny of their election expenditures.

There are about 30 polling districts in Cameron Highlands parliamentary constituency.

Let the BN and Harapan candidates submit a daily report of the election expenditures for each of these 30 polling districts.

In fact, I will go further.

The Election Commission and the NGOs should be welcome to send monitors to all by-election activities.

With such arrangement, and the daily report of the election expenditures of the candidates, I have no doubt that we will be introducing an innovation which will ensure free, clean and fair election practices in Malaysia - and to the whole world as well.

Will Ramli agree and answer in the next few hours in this age of instant communications when information travels at the speed of light?

LIM KIT SIANG, a veteran of the DAP, is the MP for Iskandar Puteri.