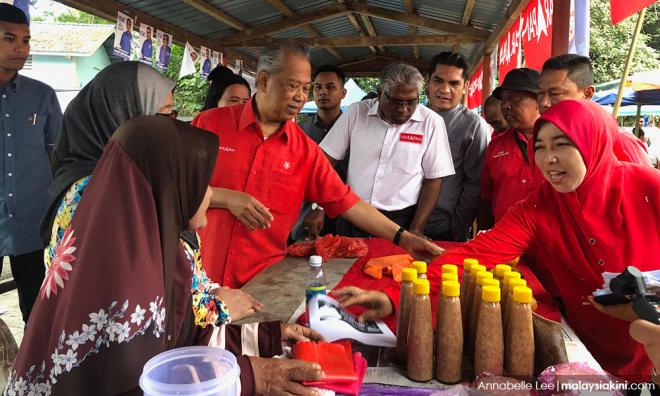 The defeat in the Cameron Highlands by-election yesterday serves as a lesson for Pakatan Harapan to fix weaknesses in the ruling coalition, especially in terms of solving the people's problems, said Bersatu president Muhyiddin Yassin.

Muhyiddin, who is also the home minister, said that although they lost, the by-election provided an opportunity for Harapan to get feedback from the people about their expectations of the government.

"The information we received from the grassroots on issues that bothered them was mainly on the cost of living, development and so on, we will look into them even though we lost.

"In the context of the current situation and circumstances, there is much that Harapan has to take into account, and we have to correct the existing problems," he told reporters when asked to comment on the result of the by-election in Arau today.

Muhyiddin said, however, he was convinced that the outcome did not reflect the overall sentiments of the people nationwide.

Without elaborating on the issue, Muhyiddin said the takeover was only temporary until a new leadership line up was finalised.

"We have begun the process, and later we will announce the restructuring of the leadership at the state level.

"So in the meantime, I appeal to all parties not to issue any statements, and let the situation become calm and orderly and Insya Allah (God willing ) we will settle it as soon as possible," he said.

Perlis Bersatu faced an internal struggle when its secretary Wan Saiful Wan Jan was dropped from the leadership line up citing health reasons. However, Wan Saiful later claimed it was done due to other factors which raised questions over the integrity of the state leadership.

Earlier, Muhyiddin appeared as a panellist in the 2019 Perlis Malay Congress dialogue session organised by the Perlis Centre for Excellence and Development in collaboration with Universiti Malaysia Perlis.

The congress is aimed at educating the public on the positive values that Prime Minister Dr Mahathir Mohamad wishes to apply in the new government administration as well as provide an opportunity for the people to be heard by the country's leaders.