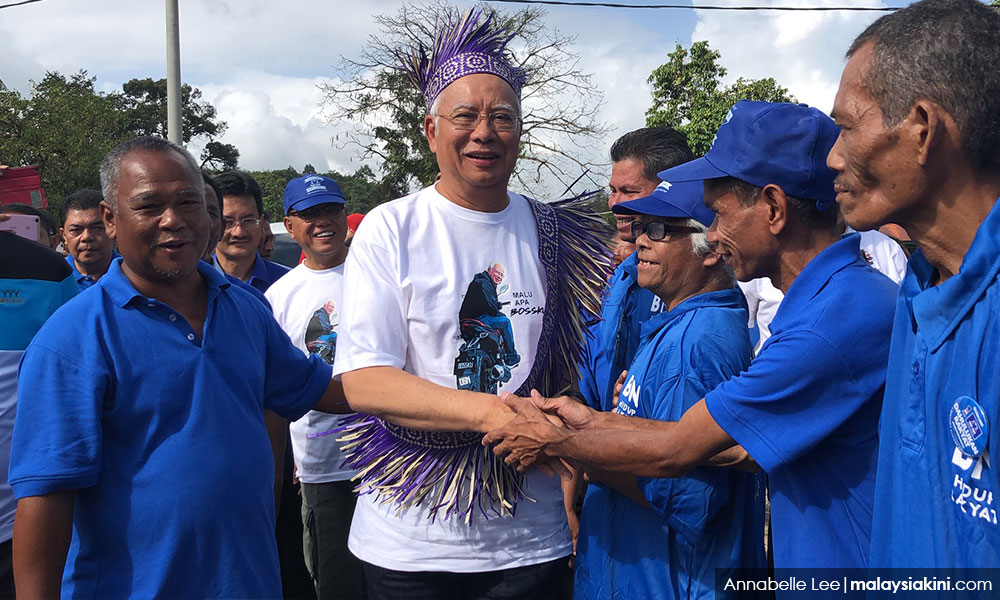 Yoursay: 'It’s time to focus on reforms, not Najib'

YOURSAY | ‘Focusing on the ex-PM in Cameron gave the impression that Harapan had nothing to show.’

The Wakandan: It is true that the 1MDB scandal had less impact in rural and semi-rural areas, which usually thrive on personal relationships and local realities.

This was proven in the last state election in Sarawak. While the then state BN acknowledged the corruption of 1MDB scandal, they nevertheless explained that it was a ‘Malaya affair’ and therefore did not concern them.

With much of the population in poverty, the higher concern is putting food on the table. BN has always exploited this to the core and, in fact, many believed that keeping them in perpetual poverty was deliberate in order to keep their hold on them.

Pakatan Harapan’s focusing on Prime Minister Najib Abdul Razak gave the impression that they had nothing to show. If you do not speak about your achievement or what you are doing, then that’s because you probably have nothing to show for in the first place. And how true was that?

Najib could boast about the previous government’s achievement because they had been in Putrajaya for decades, no matter how little that may be. While Harapan may not have those records being a new government, it could have shown what it is doing now.

Des Ng: It’s very sad to see that Harapan has become so complacent so fast - within nine months.

Instead of showing the rakyat what they can achieve and giving the rakyat a vision, Harapan continues to harp on the past regime's and Najib's misdeeds.

The kampung folks are not very good at reconciling why an alleged 'criminal' is allowed to walk and campaign freely amongst them. They are beginning to believe his innocence! Hence, they would back BN as the latter had been the 'provider' before.

Harapan had to wake up fast, or they will lose more by-elections and by the 15th general election, they will be finished.

Show the rakyat real reforms and they might be forgiven for their teething problems.

MahuSeeLui: Harapan's narrative should be that it is clean, honest, transparent and moving toward reforms.

Instead, it continues with many old practices. What to expect when it is headed by many old Umno stalwarts including Dr Mahathir Mohamad, and know nothing better.

Lodestar: This is a very unconvincing analysis. So political scientist Bridget Welsh thinks that Harapan should have campaigned on promising change, introducing new policies and cleaning up the system.

But BN supporters warmly welcomed Najib as campaigner-in-chief despite the dunghill of corruption charges that he is facing.

This doesn't sound like they are interested in change. Welsh seems to think that they are sophisticated voters, but the reality is that they lapped up BN's old rhetoric on race and religion.

Harapan lost simply because of the racial demographics of the electorate and their old style of thinking. Promising change would be like throwing flowers against parangs.

ChuenTick: Did Welsh not feel the sense of disillusionment and disappointment with Harapan among the voters that supported it during GE14?

But, yes, perhaps that is not a big deal for the Cameron Highlands by-election - those three findings she highlighted are more relevant to the situation on the ground there.

Yet, I believe that unless the Harapan government starts fulfilling its election promises, come GE15, we will have a new government.

Headhunter: What Welsh says about Najib is true. The government is making him relevant again, singling him out as their main enemy and giving him the publicity that he craves for. Very Umno indeed.

No wonder Najib and his sycophants think he will be the next prime minister again.

FairMind: Welsh is spot on! Harapan's strength was about promising change, about revamping the system and introducing new policies and values, but instead, it played to PAS and BN's strength - race and religion.

Bless Malaysia: Congratulation to the Securities Commission (SC) for taking some action. However, the punishment is certainly insufficient to deter future repeats of such irresponsible reporting, especially when the public trust is being violated.

The partner in charge should be barred from practising. The recent punishment of Deloitte Indonesia should be a fine example.

Annonnymous 080: I find this fine so unnecessary. This is given that SC in its own statement had said that "the SC said Deloitte's independent auditor's report for 1MDB Real Estate Sdn Bhd for 2015 and 2016 had stated that the firm was unable to obtain sufficient and appropriate audit evidence to determine whether the advances to 1MDB from, among others, the proceeds of the bond could be recovered".

So, why didn’t any SC officer read the independent audit report for 2015 and 2016? SC's higher management and staffers are so well paid and they should have taken the initiative to do their job. They should not expect others to alert them as the approval is in the hands of SC.

Anonymous_1527925538: What is RM2.2 million compared to the billions of ringgit the country lost because of the 1MDB scandal?

The SC should have also asked Deloitte to cough out all the audit fees they received from 1MDB.

Shovelnose: If SC wants to deter future white-collar criminals, they must grab the licensee or signing auditor by the collar and prosecute.

If found guilty of negligence by the court of law, not only should they be given a jail sentence but also have their professional licence withdrawn for good and barred from acting ever again as an auditor in any professional capacity in the country.

Slapping the wrist of a naughty child treatment is woefully insufficient.

yoursay
najibabdulrazak
pakatanharapan
cameronhighlandspolls
Related Reports
Najib: I 'turun', Guan Eng 'naik' but ringgit goes down
a year ago
Kadir Jasin: People will be happier with Harapan if Najib is in jail soon
a year ago
Najib slapped with 3 more money laundering charges
a year ago
Najib reinvented, Harapan regressing?
a year ago