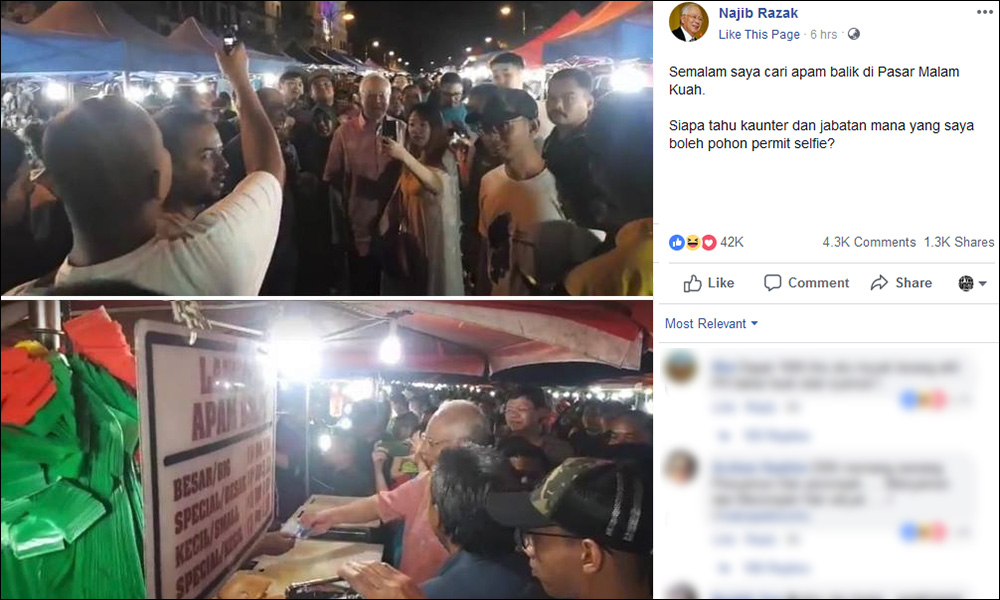 Former premier Najib Abdul Razak continues to live up to his newly earned reputation as the "King of Trolls" with his latest Facebook post on his visit to Langkawi, the constituency of Prime Minister Dr Mahathir Mohamad.

In his posting, Najib sarcastically questioned which government department he had to obtain permission from before being allowed to take selfies with his supporters.

"Yesterday I was looking for apam balik at the Kuah night market.

"Who knows which counter at which department I can apply for a selfie permit?" he asked.

Najib's post was accompanied by two photographs believed to be taken during his visit to the night market in the Langkawi town.

It is also believed to be in response to several local Bersatu leaders lodging five police reports ahead of his visit.

Negeri Sembilan Bersatu chief Rais Yatim, however, said there was no need for such reports, as Najib was only visiting Langkawi to be with his supporters.

najibabdulrazak
kingoftrolls
Related Reports
'King of Trolls': Guan Eng, Azmin don't have Whatsapp group
a year ago
Kit Siang mentions him 11.4k times, 'King of Trolls' creeped out
a year ago
9 months, still childless - Najib trolls gov't on manifesto non-deliveries
a year ago
Khalid concedes 'king of trolls' Najib suited for the opposition
a year ago