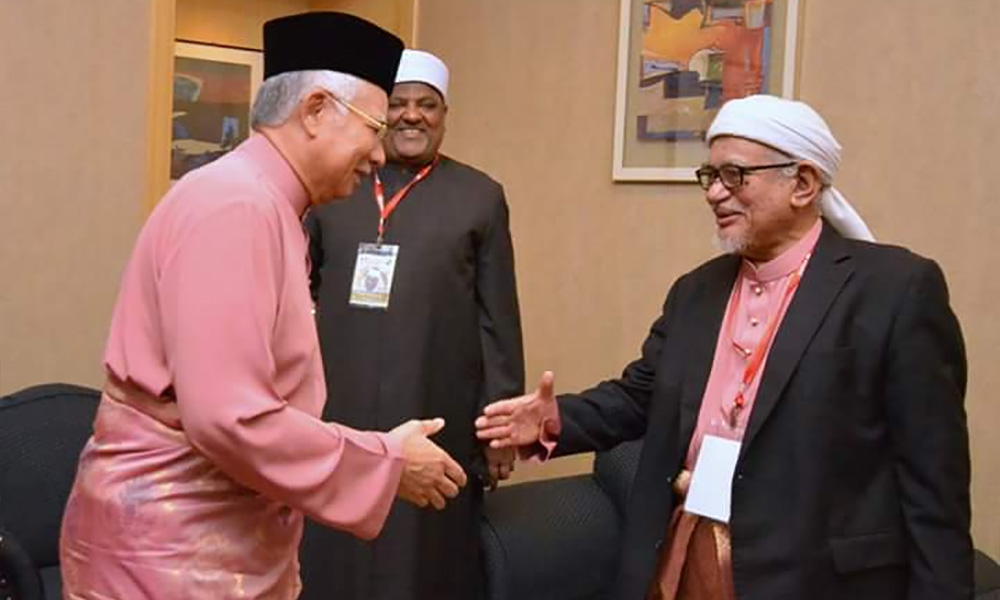 Yoursay: A religious party that makes lying a virtue?

YOURSAY | ‘Hadi had previously suggested that a corrupt Muslim is better than an upright non-Muslim.’

FellowMalaysian: PAS is a political party governed totally and strictly under holy Islamic principles and tenets. Yet its supreme council leaders unabashly and brazenly display with pride their fleet of top-notched 'kereta mewah' (luxury cars).

Most PAS supporters, on the other hand, struggle each passing day to make ends meet, much like the metaphor 'kias pagi makan pagi, kias petang makan petang'.

And what is more ironical is that party leader Abdul Hadi Awang went around collecting handouts from these desolates on pretext of 'defending race and religion' when he was hot in pursuit against Sarawak Report editor Clare Rewcastle-Brown in his RM90 million court case in London.

Hadi and his ilk would have slipped away without even raising an alarm as he believed he was invincible and he was 'sanctioned' to lie and slander. His fatal mistake this time around is that Hadi overstayed his welcome.

Hadi thought he was the kingmaker and both sides of the divide desperately need PAS' helping hand.

His calculations have misfired this time around as he had rudely aroused and rattled two giants – Prime Minister Dr Mahathir Mohamad and PM-in-waiting Anwar Ibrahim - who both had, hitherto to some very recent events, cast a condescending eye over his excesses and shortcomings.

No Pakatan Harapan leaders will ever trust him anymore. He only has himself to blame. And that includes this MACC's dragnet against the party.

Benjamin Chong: Hadi had previously suggested that a corrupt Muslim is better than an upright non-Muslim.

He even said it was morally okay to lie to save the party and he instructed late spiritual leader Nik Aziz Nik Mat's son Nik Abduh to lie about the video which went viral. He called this lie "syariah-compliant".

Can anyone trust a religious party which makes a virtue out of lying? Do we need to change the definition of the word "lie" in the dictionary? They are just a bunch of hypocrites, Period.

Kawak: PAS and its leaders are in denial. When assets are seized, it denotes MACC has reason to believe there was a money-laundering offence committed.

So, PAS and Hadi, let’s wait for MACC to complete its investigation. It is going to be interesting how PAS supporters will react to their leaders being charged in court.

Kural: Finally, a serious attempt by relevant government authorities to seek some reckoning on allegations of misuse of powers by some political-cum-religious leaders.

Hopefully, this investigation will have far reaching and constructive influence on the attitude of PAS rank-and-file members towards their party leaders in general.

Members and followers should start engaging their prerogatives for sanctioning and removing leaders who default their obligations for upright conduct.

Wira: PAS leaders can lie but they cannot hide. Everyone can see those cars. From where did they get the money to buy those cars for personal use?

If not from Umno, then it must be from members' donations. Either way, there must be proper accountability.

Anonymous 8247274088438772: PAS leaders, please explain to us and your supporters why all the luxury cars, properties and money are seized.

I think we need to have a rally to protest against the seizure. We should let all PAS supporters know and tell them how Harapan is oppressing PAS via MACC.

And, by the way, please explain to your supporters how these PAS leaders suddenly come into such wealth, given that there is likely no income tax submission for all the sudden wealth.

It is possible somebody likes the PAS leaders so much that he is willing to donate millions for these leaders to spend as they like, without any conditions attached.

The donation is given freely for the use by the PAS leaders as they deemed fit (so the need for luxury cars, luxury properties and numerous wives) and the donation should never in any way be deemed as ‘dedak’ or animal feed.

PAS should indeed start to organise a protest rally with one million PAS supporters and three million Umno members in solidarity to protect the sanctity of donations.

I recalled once seeing Hadi at an opposition rally just before GE13. The late PAS spiritual leader Nik Aziz Nik Mat was there as well together with DAP and PKR leaders. When the time came for Hadi to give his speech, he spoke for less than five minutes and then he went off immediately.

I can’t recall anything of his speech. When I saw him walking off, his body language and expression gave me an impression that this man was not happy to see such strong support for the then opposition. I could feel that his spirit was not with the opposition.

True enough, with the departure of Tok Guru after GE13, the direction of PAS swung drastically and it began to support Umno.

For an established party like PAS which has very strong grassroot supporters, I wonder how much damage the party will face when led by a leader who can be enticed by goodies.

Had PAS been more principled and led by better leaders like those currently in Amanah, I would think that PAS will now be in the government and be able to contribute to nation building.

Instead, PAS floundered and is now under investigation. Instead of being respectable national leaders, these people in PAS could potentially be joining Najib in the “Hall of Fame”.

Sadirah: When you only have belief without convictions, prayer without inner change and pilgrimage without inner transformation, then your life is determined by the external world, and by your fame and riches.

These are bankrupt politicians who sell the wares of religion without practising the same.

Abasir: @Sadirah, these are hollow men who prey on the pathetic ignorance of their followers - and god knows there are millions of them. Some were simply born that way and many were made that way by a regime that thrives on stupidity. If only, they had the capacity to question...

As for the message in your first line, I'm afraid it is not a requirement - mechanistic conformance to the rituals of faith is all that's required and it’s where most are marooned.