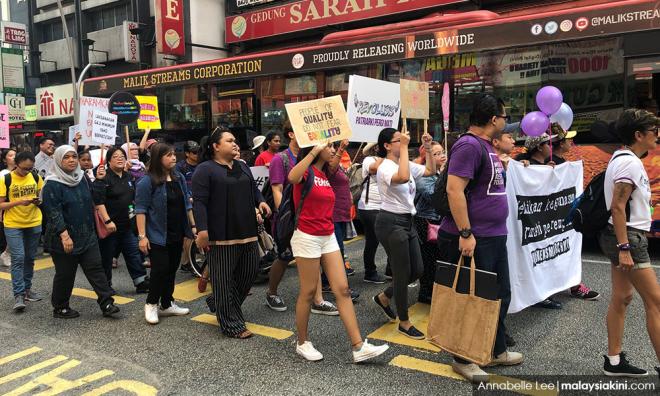 Organisers of yesterday's International Women's Day march have restated their five key demands amid the backlash over the presence of LGBT participants in the demonstration.

Contrary to the moral panic “instigated by the media, and amplified by the political opportunism by individuals in positions of authority," organisers said, the International Women's Day march calls for:

• Ending violence based on gender and sexual orientation;

• Ensuring women's rights and freedom to make choices over their own bodies and lives;

• Ensuring a dignified minimum wage of RM1,800; and

• Destroying patriarchy and building a genuine democracy at all levels of society.

More than 300 people had gathered in downtown Kuala Lumpur for the Women's March yesterday, including members of the LGBT community and those in solidarity.

While there were shouts of "Jangan kacau LGBT (Leave the LGBT community alone)" and "Hidup LGBT (Long live LGBT)" during the demonstration, the speeches had focused on the five key demands.

The presence of the LGBT community at the Women's March has been criticised by several politicians, including de facto Islamic Affairs Minister Mujahid Yusof Rawa and Wanita Umno chief Noraini Ahmad.

In a statement today, the organisers said there was a rich diversity of voices at the march that represented concerns of women from all sections of society, who spoke clearly and loudly about their realities and vision for a better nation.

“This included women from Sarawak who demanded equal access to maternal healthcare, and shared the tragic story of Kam Agong who lost her life due to medical negligence after delivering her eighth child.

Harapan OKU member Naziaty Mohd Yaacob spoke of the challenges faced by women and girls with disabilities, including in gaining recognition and access to justice for gender-based violence.

“Representatives from Orang Asli women demanded equal access and control over their land and resources, while representatives of young women demanded the right to comprehensive education on gender equality and sexual rights to address the root causes of gender-based violence.

“There was also an overwhelming collective demand for increasing the minimum wage to RM1,800, in recognition of the fact that most low-income earners are women,” the statement read.

Organisers said the importance of these realities and demands were entirely sidelined by the media and attackers of the march, with disproportionate attention being paid to singling out the presence of LGBT participants.

“This borders on incitement to hatred and violence towards a section of Malaysian society who are already at risk and facing multiple forms of discrimination.

“We strongly reject such a move, and the continued escalation of this hostile and aggressive treatment. A healthy democracy rests on the full and equal participation by all levels of society. ”

The organisers reminded the government that it is their duty to defend this basic principle, particularly those who are marginalised in society.

It said the government cannot be selective in carrying out this duty to only particular groups of women, but must apply this to all regardless of ethnicity, age, ability, location, gender or sexuality.

“The specific and deliberate non-recognition of LGBT women acts as an attempt to exclude and erase an entire segment of the population of women. Without such an intersectional and inclusive approach, all of our measures towards building a more peaceful, harmonious and developed nation will be hampered,” organisers said.

“We call for reason, restraint, openness and respect by all parties who are currently launching a campaign of hate and aggression towards the march.

"(Let's) instead celebrate this International Women's Day March event as one that united women – and others – across a diversity of experiences, concerns and regions for a more inclusive, just and democratic Malaysia.”

Meanwhile, in a separate statement, Bersih also reminded Mujahid that democracy is about allowing all quarters to express their views and concerns in a peaceful way, including gathering peacefully.

It cited Article 10 of the Federal Constitution, which stated every citizen has a right to freedom of speech, expression, peaceful assembly and form associations.

“One need not agree with all the views expressed or issues championed but one should seek to listen and understand even if, after doing so, one disagrees.

“As a minister of a democratic government, Mujahid should not restrict or condemn any groups that wish to highlight their concerns.”

It added that since May 9, Malaysia has witnessed the anti-Icerd, 'Melayu bangkit', 'defend Prophet Muhammad' and other gatherings, and Bersih commended the Pakatan Harapan government for allowing and facilitating such gatherings without intimidation.

However, Bersih said they are concerned that with the posture taken by Mujahid and various politicians and groups, it would encourage further hate and discrimination against the LGBT community.

“Every person has a right to protection from violence and discrimination under the law. To demand for such protection is different from promoting a certain lifestyle, sexual orientation or ideology.”

Bersih is also appalled that Mujahid said that the Women's March rally did not have a permit because the notice to hold the rally was submitted less than 10 days before it was held and that the organisers will be investigated under Section 9 of the Peaceful Assembly Act 2012.

“We wish to remind the minister that Harapan has promised to abolish draconian provisions in the Peaceful Assembly Act 2012 and Penal Code on peaceful assembly. The constitutionality of Section 9 is surely in question and should not be used against peaceful demonstrators.”

“We call on Malaysians and the Harapan government to reflect deeply on the matter of democratic space and take this opportunity to discuss concerns raised by those who hold protests and to affirm civility in our society.”

A guide to what happened at the Women’s March

womensday
lgbt
Related Reports
Women can do much more, so much more
a year ago
Malaysia making good progress in women's rights - EU Ambassador
a year ago
Women stamping their mark in new M'sian politics
a year ago
Gov't formulating gender equality bill for women
2 years ago